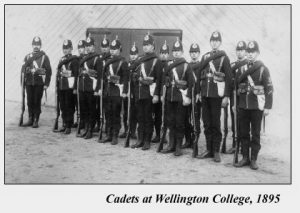 [Page 191, line 7] cadet-corps Since Victorian times many British public schools have organised military training and drill for their students in ‘cadet-corps’.

[Page 193, line 33] Pompadours An invented name for a regiment in the Indian Army.

[Page 194, line 18] the Mutiny The bloody events of 1857 when the sepoys of the Indian Army rose against their officers, and against the British.

[Page 196, line 11] cads the word cad was then used in public schools in describe anyone not of the public-school class. It was not meant to be rude or offensive, but must have seemed so to outsiders.

[Page 200, line 20] Defence or Defiance the motto of the Volunteer Movement of 1859 was `Defence not Defiance’.

[Page 201, line 1] privatim et seriatim medieval Latin, meaning privately and one after another.

[Page 207, line 7] five years of Mr Gladstone’s rule beginning with the defeat of the Conservatives in 1880. Gladstone was not popular with people of a strong imperialist cast of mind.

[Page 208, line 32] bargee originally bargee meant a barge-man, one who worked on a barge. It is used throughout the book as a term of abuse.

[Page 209, line 33] Bopper this may have been an invented word, referring to the Boy’s Own Paper, 1879-1967, an influential magazine for boys, published by the Religious Tract Society. It was launched to appear weekly but from 1913 came out monthly. Many famous writers for boys contributed to it. Beetle mocks its school-story views on school behaviour.

[Page 210, line 1] Jebusite the Jebusites were the original inhabitants of Jerusalem and the land around it. David said: `Whosoever smiteth the Jebusites first shall be chief and captain. So Joab the son of Zeruiah went first up, and was chief.’ In the seventeenth century it was used as a nickname for Roman Catholics, particularly Jesuits, and in general as a term of abuse. The Hivites were another of the peoples inhabiting Palestine before the Jewish settlement there.

[Page 211, line 12] marbles See the note on “A Little Prep” page 165. Marbles might have been played at USC but would not have been taken seriously, or ranked with games like football or cricket, which were a deadly serious matter.

[Page 213, line 21] Their fathers had not declared it unto them There is an echo here of St. Paul’s words to the Athenians (Acts 17, 22) after seeing the altar inscribed to the Unknown God: ‘Whom therefore ye ignorantly worship, him declare I unto you.’