The story was first published in McClure’s Magazine in May 1899, and subsequently collected in Stalky & Co. (1899) It was later included in The Complete Stalky & Co.

Defaulters for lateness, including Stalky are doing punishment drill under the school Sergeant. A distinguished visitor sees this, thinking that it is a splendid voluntary activity, and is soon instrumental in getting a cadet corps established at the school. Stalky and others who are going into the army agree to join, as a way of learning their drill before they go on to cadet school at Sandhurst, but insist that it has to be strictly a private activity. 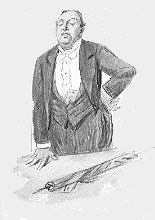 Unfortunately a visiting lecturer, an MP, addresses the school on ‘patriotism’ with condescending rhetoric, brandishing a Union Jack, and talking of Honour and Glory in terms that offend the boys deeply. For them these are things that are too private to be talked of openly. When the next day the cadet-corps assembles, the Sergeant unfortunately pays fulsome tribute to the MP’s speech. The boys’ response is to abandon the corps.