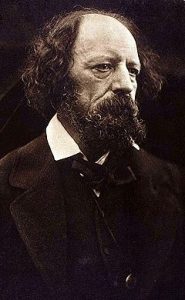 “Tennyson” Alfred, Lord Tennyson, 1809-1892, Poet Laureate during much of Queen Victoria’s reign, who wrote many well-known poems, including In Memoriam and Idylls of the King. Kipling wrote “The Last of the Light Brigade” as a “sequel” to Tennyson’s “The Charge of the Light Brigade”. The Poet Laureate is a sort of English national Bard, whose duty is to commemorate important events in verse.

The Poet considers how the arrival of the motor-car sees the end of the coachman and the arrival of speeding drivers, threatened by policemen hiding behind pig-sties, but free to range abroad and shock elderly aunts in their staid barouches. Ann Weygandt notes Kipling’s admiration for Tennyson as a ‘Mastersinger’, but does not see great merit in this parody.

Charles Carrington (pp. 260 and 262) tells how Gladstone, who became Prime Minister for the fourth time in 1892, looked around for a new Poet Laureate in succession to Tennyson. Kipling was suggested by the influential author and journalist H. D. Traill.

Kipling’s opinion was not sought until 1895, when he declined the role, despite the distinction it carried. He neverthess became a sort of unofficial Laureate, thundering in The Times from time to time in the cause of England and Empire.

‘scutcheoned gate gates at the entrance to a park etc. with the coat-of-arms of the owner. An escutcheon is a coat of arms. (See “A Displaie of New Heraldrie”).

Shallow a country Justice of the Peace in “King Henry IV Part 2” and “The Merry Wives of Windsor” who also appears in Kipling’s “Marrèd Drives of Windsor.”

farrowed sow a female pig who has given birth to piglets.

minion of the law a policeman – the inference is that he is hiding behind a pigsty to catch motorists exceeding the speed-limit. Kipling’s policemen are rarely seen in a dignified light. A ‘minion’ is a subordinate figure of no great importance.

Ashby-de-la-Zouch A town with a fine castle in Leicestershire, mentioned in Walter Scott’s Ivanhoe; we have not found it in Tennyson’s works.

Lyonesse a legendary land, now said to be submerged beneath the sea between the Scilly Isles and Land’s End. See Idylls of the King, Tennyson’s cycle of twelve narrative poems published between 1856 and 1885 about the legend of King Arthur, and his Knights of the Round Table.

Locksley Hall another poem by Tennyson published in 1842.

barouche Like a landau, a four-wheeled horse-drawn carriage, seating four passengers, but with a hood over only the rear two seats.