[Title] The ‘eathen The Heathen. See [Line 1] In an early draft it was titled “The Recruit’s Progress” with a sub-title “A Song of Degrees” (Richards Collection, Yale)

[Line 1] The heathen in his blindness bows down to wood and stone; Two lines from the missionary hymn written by Bishop Heber (1783-1826), Bishop of Calcutta 1823-1826, No. 358 in Hymns, Ancient and Modern and generally known as “From Greenland’s icy mountains” it was immensely popular, particularly in the United States. Kipling likens the conversion of the raw recruit straight off the streets into a trained soldier to the way in which Missionary Societies then sought to convert the populations of non-Christian countries to Christianity.

[Line 3] … side-arms … Weapons carried at the side hanging from a belt or sash; swords, daggers, bayonets, pistols or revolvers.

[Line 7] All along of abby-nay, kul an’ hazar-ho, Terms explained by Kipling’s own footnote, but also see the Headnote.

[Line 9] – ‘e draf’s from Gawd knows where; In this sense, a draft was a batch of recruits. This phrase was also Kipling’s dig at the failure of the Cardwell reforms of 1872 to provide an adequate, trained Army. One aspect of Cardwell’s reforms had been to tie regimental recruiting to specific local areas but when there was a shortage of recruits from that area numbers had to be made up by drafts from other regimental areas and they were always likely to be the least promising of those available. At about the time of writing this poem, summer 1895, there was much opposition to the Cardwell system in British newspapers.

[Line 10] They bid ‘im show ‘is stockin’s an’ lay ‘is mattress square; It is worth repeating the comment made by Ralph Durand in 1914 on this point: 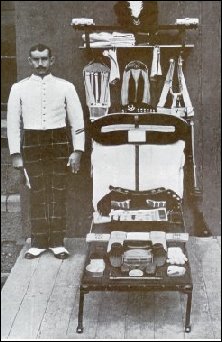 Part of a private soldier’s duties is to submit his kit [clothing and equipment] periodically to inspection, so that any deficiencies may be noted and replaced – at the soldier’s expense.

When laid out for inspection, every article must be placed in a particular position; his clothes-brush in one place, his needle-and-thread case in another.

The reason for this particularity is partly to teach the soldier to be methodical – among the most important of the lessons he must learn – and partly because kits may be inspected much more quickly and efficiently if arranged according to a definite plan than if the arrangement of each is left to the taste and fancy of its individual owner.

The photograph shows a private of the Sutherland Highlanders standing by his bed with his kit displayed on it and the shelf and racks behind. This soldier is no recruit, the two ‘Good Conduct’ stripes on his arm indicate that he has at least 5 years of unblemished service behind him. The photograph was taken out of doors on a wooden ‘stage’ to show recruits how it should be done. The rifle beside the bed would normally be kept with others in a rack at the end of the barrack-room.

[Line 11] ‘E calls it bloomin’ nonsense … Durand again: ‘… a recruit too inexperienced to understand the reasons that underlie the regulations he has to obey is apt to feel injured if he is reprimanded for placing his boots in the particular spot that should have been occupied by his razor.’

[Line 12] An’ then up comes ‘is Company an kicks ‘im round the floor ! That Kipling saw this as one of those things that happened to recruits is clear, but if it was based on his acquaintance with army life in India it is an indication of another failure of the Cardwell reforms. If working correctly, they should have ensured that recruits were given their basic training in the Home battalion in Britain and only sent to the corresponding overseas battalion when familiar with their duties and life in the Army.

Unfortunately, the chronic shortage of recruits and the demands of service overseas meant that many were sent out untrained or only partly trained and training had to be completed in the unit. This could mean that recruits could be in a company barrack-room with trained soldiers, unsympatheteic and impatient with someone causing the barrack-room to suffer when failing to meet the required standard at inspections. (See “His Private Honour” (Many Inventions p. 136).

[Line 15] ‘E talks o’ “cruel tyrants” The quotation marks indicate that the recruit is repeating words that he has heard — and ‘tyrants’ have almost inevitably been ‘cruel’ in public speech since the days of Dr Johnson.

… which ‘e’ll swing for by-an-by, For whom he will be hung for murdering in the not too distant future.

[Line 18] ‘E’s lost ‘is gutter-devil; He is no longer the street-wise guttersnipe, living on his wits. 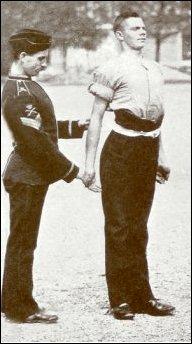 [Line 25] – ‘e throws a chest This means sticking his chest out with pride, a result of being trained to stand to attention with ‘chest out, shoulders back, head up and chin in’.

The photograph shows a recruit being taught this position with the sergeant adjusting the position of the recruit’s arms.

Note that the sergeant naturally adopts the same position, although looking down. Also compare the recruit’s posture with that of some of the prospective recruits at the top of the page and the change that Kipling is describing is clear.

[Line 26] You see ‘im grow mustaches; The then fashionable sign of manhood and maturity. See the Sutherland Highlander beside his bed above.

… you ‘ear ‘im slap ‘is boot. With a cane or riding crop.
In the 1890s soldiers were not allowed to leave barracks, or ‘walk out’, in civilian clothes; they had to wear the uniform items approved for ‘walking-out dress’. This generally included a swagger-cane or, for cavalry and artillery, a riding crop.

Durand makes the splendid comment: ‘It is wonderful how much self-confidence may be imparted to a shambling, bashful man who does not know what to do with his hands by giving him a cane to play with.’

[Line 27] ‘E learns to drop the “bloodies” from every word ‘e slings It is quite clear from an early draft of the poem, which reads ‘ ”E learns to leave off cussin’ with every word ‘e slings’, that the meaning is that the recruit learns to stop saying ‘bloody’ with every word he speaks. Durand ignores the line but Carrington, in The Complete Barrack Room Ballads (Methuen, London, 1973) seems to misread this line, interpreting “to drop the bloodies” as ‘to use the soldier’s meaningless vogueword’. This is the opposite of Kipling’s point, that as a soldier, the recruit leaves behind the language of the gutter. John Whitehead avoids interpreting the line but supposes that Kipling really meant a stronger swearword than ‘bloody’.

… bars an’ rings … Parallel bars and pairs of suspended rings, both of which are still popular with experienced gymnasts. However, these were not included in the physical training of recruits and their inclusion here indicates how the young soldier has progressed.

[Line 32] … send ‘is name along for Lance. Recommend him for promotion to Lance-Corporal, initially unpaid acting rank and, since he continues to sleep in his barrack-room, a position not without its difficulties as indicated in the next stanza. 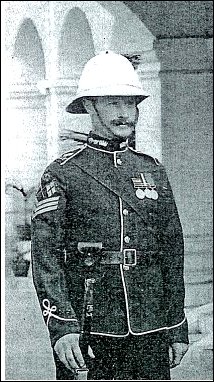 [Line 37] … Colour-Sergeant, The senior of the five sergeants in an infantry company at that time, a post corresponding to that of the Company Sergeant Major introduced in 1913.

This photograph is of a Colour-Sergeant of the Second Battalion, Princess Victoria’s Royal Irish Fusiliers, taken at Ferozepore in 1908 by F. Bremner, Lahore & Quetta, courtesy of the late Michael Jefferson.

When the company was on parade, he was on the right of the supernumerary rank of subalterns and sergeants behind the company from where he could watch the men in the ranks, controlling, warning or encouraging them as necessary. See Danny Deever for an example of this in practice. Under certain circumstances, he could form part of the armed escort to the Battalion Colours but only on parade, the Colours not being carried in battle since 1881.

[Line 38] He schools ‘is men at cricket, … From 1860 onwards sports and games in the Army were given increasing importance, reaching a peak before the 1914-18 war. Inter-unit competitive games were used to develop team spirit and cooperation and unit commanders and senior ranks attached great weight to their unit being successful.

[Line 40] … ‘ave the Core at ‘eart. For ‘Core’, read ‘Corps’ (as Kipling had first written in a draft), but with the general meaning of the arm to which the unit belonged, in this case the Infantry, rather than a specific Corps such as the Corps of Royal Engineers. I suspect that Kipling really wanted to say ‘Regiment’ but there was no way of fitting it in.

[Line 43] … a ranker that’s buyin’ leave to shirk; ‘Ranker’, short for ‘gentleman-ranker’, an enlisted soldier from a middle or upper class family who had, for any of a variety of reasons, withdrawn from society into the anonymous ranks of the Army. Some retained access to family money with which they could pay other soldiers to keep their kit clean, even do fatigues for them – to the Colour-Sergeant, this was buying a way out of carrying out their duties, or ‘buying leave to shirk’.

[Line 45] … see their socks are right, One role of the ‘Mother of the Company’ (see Headnote). Care of the feet and the responsibilities of both officers and senior NCOs in ensuring that their men have boots that fit and socks in good repair are stressed in The Soldiers’ Pocket-book, 1882. See also “Route Marchin'”, stanza six, for advice being given on the subject:

So ’ark an’ ’eed, you rookies, which is always grumblin’ sore,
There’s worser things than marchin’ from Umballa to Cawnpore;
An’ if your ’eels are blistered an’ they feels to ’urt like ’ell,
You drop some tallow in your socks an’ that will make ’em well.

[Lines 49-52] Stanza 11 A graphic description of the situation when a squad or patrol under a junior NCO gets lost in a hostile area; the sick feeling of the men’s commander, the apprehension of the men’s comrades, their bad jokes to cover their anxiety until at last the men appear – tensions not relieved until a careful headcount provides reassurance that no-one has been lost. From my own experience I find this so convincing that I believe that the term ‘cap ’em in’ must mean a headcount.

However, John Whitehead identifies it as a fox-hunting term to describe a huntsman waving hounds into a covert with his cap and he felt this was what Kipling had in mind, although he did include my idea that it might be a headcount in his revision of the notes to the Centenary Edition of Barrack Room Ballads (1997), for which I helped provide military background.

[Line 57] Of all ‘is five years’ schoolin’ … Kipling stressing the point that soldiers on the standard short-service engagement of six years might well be no more experienced than this – and if they come out of it well, then it will have been due to the Colour-Sergeant and his fellow senior NCOs.

[Line 64] ‘Is voice, the same as barrick-drill, a-shepherdin’ the rear. Just as he would do on the parade ground, the Colour-Sergeant is behind the two ranks of soldiers, correcting, encouraging and controlling.

[Line 66] … he feels ’em take the bit; As a horse settles the bit in its mouth and accepts the rider’s control.

[Line 67] … till the watchful bugles play, Meaning the buglers, watching for the signal to sound the charge.

[Line 72] But the backbone of the Army is the Non-commissioned Man ! Kipling’s real message.

(Unless otherwise indicated, the photographs are from At Home with Tommy Atkins by Callum Beg, (Gale & Polden, Aldershot,1901), or the contemporary illustrated paper, Navy and Army Illustrated. (‘Callum Beg’ was the pen-name of a then serving British officer.)