The City is of Night; perchance of Death,
But certainly of Night.

From the poem “The City of Dreadful Night” by James Thomson, (1834-1882). Kipling first discovered this work in his school holidays while he was at USC. (Martin Fido, p. 30)

Kipling uses the title again (but without the quotation marks) for eight articles on Calcutta which appeared in The Pioneer, The Pioneer Mail and The Week’s News in 1888. They were collected in India and England in 1891, and in Volume 2, From Sea to Sea in 1900.

[Page 371, line 3] cicalas cicada – Hemiptera, large insects, like grasshoppers, that feed on plant juices; the males have vibrating membranes in resonating cavities in the abdomen which produce a loud chirping sound. 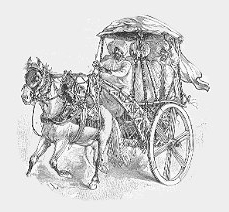 [Page 373, line 13] ekka-ponies … harness still on their backs See Beast and Man in India, Chapter VIII for this uncomfortable two-wheeled cart of crude design, with heavy and complicated harness.

[Page 373, line 23] gunny-bags jute, from the Sanskrit juta, in this context any fibrous substance – see Hobson-Jobson, p. 474. The manufacture of such bags was an important cottage industry in India before the arrival of factories with steam-power.

[Page 375, line 24] Minars Arabic Manara, tall slender towers or minarets on mosques, from which the faithful are called to prayer. See Page 377, line 19.

[Page 376, line 6] kites in this context, large scavenging birds of prey of the Accipitridae family. One named Chil (occasionally called Rann) appears in The Jungle Book.

[Page 376, line 12] Doré Louis Christopher Gustave Paul (1833-1883) French artist celebrated for his scenes in black and white of city life, and his weird and striking light effects.
Zola Emile Edouard Charles Antoine Zola, (1840-1902} French writer of powerful realist novels, which were seen as shocking and sensational in his day.

[Page 377, line 4] heliographic signals the heliograph is a device for reflecting the rays of the sun with mirrors to send signals in Morse Code. See “The Way that He Took (Land and Sea Tales) and the verse “A Code of Morals.”

[Page 377, line 12] zenanas the apartments within a house where the women are secluded; from the Persian zanana from zan ‘woman’. See Hobson-Jobson (p. 981)

[Page 377, line 24] Ravee (usually transcribed as Ravi) One of the five great rivers of the Punjab, on which stands Lahore.

[Page 377, line 29] the Golden Temple The holiest shrine of the Sikhs, at Amritsar.

[Page 378, line 14] ram in this context, a power-press which compresses a bale of soft goods so that it can be sewn up.

[Page 380, line 3] burning-ghat the riverside steps where bodies are cremated.

[Page 380, lines 4-5] the city was of Death as well as Night an echo of the quotation from James Thomson’s poem; see “Title” above.