Published in the Civil and Military Gazette, October 11th, 1886.

The story of the beautiful spy who uses her feminine wiles to wheedle secrets out of men, usually with a view to selling them to an enemy, or to the media, is as old as the hills. Today government secrets, preferably scandalous, are valuable currency for popular journalism. In Britain, in the ‘Profumo scandal’ of 1963, a minister’s career was ruined after he lied to the House of Commons about his involvement with a high-class call-girl who turned out to be the mistress of a Soviet diplomat. [A.W.]

The secret disclosed in this ditty seems to be less serious, though clearly embarrassing, and Kipling may have been referring to a particular episode which – in the small world of Simla, the hill town which became the summer capital of British India – could well have been recognised by officials and their wives as they read the CMG over the breakfast table. As in “Army Headquarters” he uses names from the Bible or classical myth to disguise the real participants, with echoes which would have been familiar to educated Anglo-Indians, as we explain below. 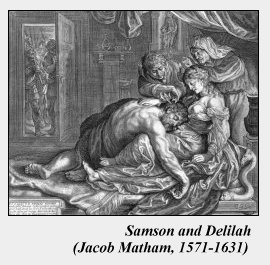 [Title] Delilah In the Bible (Judges 16) Dalilah is the “woman in the valley of Sorek” whom Samson, the great warrior of Israel, loves, and who is his downfall. Appropriately, the Hebrew meaning of the name is “[One who] weakened or uprooted or impoverished” from the root dal meaning “weak or poor”.

Dalilah is approached by the Philistines, the enemies of Israel, to discover the secret of Samson’s strength. Three times she asks him, and three times he gives her a jesting answer. The fourth time he tells her the true reason – that he does not cut his hair in fulfilment of a vow to God – and Dalilah betrays him to his enemies. Ever since, her name has stood for a treacherous and cunning woman.

[Line 1] those days are dead and done. This, and the reference to ‘Prehistoric Days’ in line 6, expresses Kipling’s ironic suggestion that this is a story of old times rather than a current scandal. Few of his readers would have taken this seriously.

[Lines 9-10] many little secrets …/ were whispered to Delilah. These two lines echo the core of the biblical episode.

Kipling portrays a number of influential women in his observations on the Anglo-Indian community, who are either ‘grass-widows’ (unaccompanied by their husbands), or with husbands who are negligible: in particular, one thinks of Mrs Hauksbee and Mrs Reiver, from Plain Tales from the Hills. [A.W.]

[Line 11] She patronized extensively a man. Again Kipling depicts a love-triangle in which the affair relies on the wife’s favours to another man, as in “Army Headquarters”.

[Line 11] Ulysses Gunne. After briefly mentioning ‘Ulysses Gunne’ in the heading, Kipling introduces Delilah’s male accomplice. Ulysses (Odysseus in the original epic by Homer) was one of the heroes of Virgil’s Aeneid. He was the most cunning and intelligent of the Greek leaders in the war against Troy, and a wordly much travelled figure.

[Line 13] Whose mode of earning money was a low and shameful one.He wrote for certain papers, which … Is worse than serving in a shop or scaring off the crows. As Kipling was only too well aware, in a Simla dominated by officials and officers, journalism was seen as a rather grubby low-class profession.

[Lines 15-16] He praised her “queenly beauty” first […] he hinted / At the “vastness of her intellect” with compliment unstinted. See also “Army Headquarters”.

[Line 21] only seven people knew it. This number seems to echo the biblical episode: “And Samson said unto her, If they bind me with seven green withes that were never dried, then shall I be weak, and be as another man.” (Judges 16,7); “Then the lords of the Philistines brought up to her seven green withes which had not been dried, and she bound him with them.” (Judges 16, 8); “And he said unto her, If thou weavest the seven locks of my head with the web.” (Judges 16,13); “And she made him sleep upon her knees; and she called for a man, and she caused him to shave off the seven locks of his head […] and his strength went from him”(Judges 16,19). [ The Holy Bible. King James Version.]

[Line 23] perhaps the wine was red. A possible excuse for the Aged Councillor’s disclosure of the Viceroy’s Secret.

The mention of wine helps create the romantic atmosphere that Kipling has established, but it also could be a deliberate reference to the fact that Samson had been dedicated from birth as a Nazarite, who was forbidden to touch wine or cut his hair. [Wikipedia].

[Line 24] an Aged Councillor the Viceroy’s council was the equivalent of the Cabinet in Great Britain – so the ‘Aged Councillor’ – or below, line 26, ‘Aged Member’ (of Council) – was, in effect, a cabinet minister, a senior figure of power amd influence in the inner counsels of the Indian Government, and privy to its secrets. [A.W.]

[Lines 27-30] Ulysses. Through the repetition of his name, it is as if Kipling wants to convey the trance-like spell Ulysses Gunne casts on Delilah to make her tell him the secret, perhaps recalling the four different replies Samson gives Dalilah, the first three being jests, the last the true source of his strength.

[Line 34] Ulysses pleaded softly – and…. that bad Delilah told. As in Line 25, the disclosure of the secret is accompanied by an aura of dense expectation and mystery. This is the climax of the story; and hereafter the lines move on swiftly.

[Lines 35-38] Next morn … / Next week … / Next month . Hyperbolically the morning after, this ‘all-important’ piece of news reached the whole Empire, presumably by Ulysses’s report in the newspaper. A week after, the guilty Aged Councillor was suffering from the effects of his partiality to Delilah. A month after, Delilah herself confides to the narrator that Ulysses behaved like a ‘beast’.

[Line 35] a startled Empire this almost certainly refers not to the entire British Empire, but to the more limited Indian Empire. In all probability, the “Viceroy’s secret”, though perhaps of great importance in India, would not have been deemed newsworthy in London, even less so in Ottawa, Cape Town, Wellington or Sydney, and wouldn’t even have registered in Samoa. [A.W.]

[Line 38] a beast in this context, meaning a mean and unpleasant person: its use stems from Dr. Johnson’s dictionary definition “a brutal savage man; a man acting in any manner unworthy of a reasonable creature’. Or, as the OED has it: “’in modern phraseology opprobriously employed to express disgust or merely aversion. ‘

This echoes Milton’s “Paradise Lost”: ‘beast’ is the derogatory epithet Eve addresses to the tempting serpent with: “Thee, Serpent, suttlest beast of all the field” (Book 8, line 560).

However, the OED goes on to say that the word is used: ‘Now frequently in a weaker sense ‘. Thus a small girl whose brother had taken the last chocolate might say ‘You Beast !’. [A.W.]

[Lines 39-40] We have another Viceroy now, those days are dead and done / Of Delilah Aberyswith and most mean Ulysses Gunne. The poet’s ironic suggestion is that times are different now, and that there are no more gossip-mongering ladies or unprincipled journalists.