First published in the first number of W.E. Henley’s weekly Scots Observer (later to become the National Observer) on 22 February 1890 followed by publication in the Allahabad The Week’s News and the New York Tribune, 23 March 1890.

The verses are written as a ‘question and answer’ sequence, a traditional English ballad form. Charles Carrington identified “Barnacle Bill the Sailor” as a basis for the structure. If so, Kipling has dispensed with the traditional thrice repeated question and incorporated question, answer and commentary in what was originally the eight-line response. In addition, line length and metre have been altered, incorporating a bugle call and slow and quick march time, so that the end result is a world away from the bawdy, rollicking tone of the possible original.

In his book The Macdonald Sisters (Peter Davies, London, 1960), Earl Baldwin, first cousin once removed to Rudyard Kipling, suggested as an alternative that it may come from a song which was a favourite of both Kipling’s grandmother, Hannah, and his mother, Alice. Baldwin identifies this untitled song as one included by Walter de la Mare in his collection of verse, Come Hither , in the notes on another old poem, ‘There was a knight’.

Both are ‘question and answer’ poems with question and answer on alternate lines but with very little resemblance to the form of “Danny Deever”. However, it is significant that the two protagonists in Hannah’s and Alice’s favourite are a sinister stranger, called ‘Meet-on-the-Road’, and a child on the way to school, called ‘Child-as-it-Stood’, clearly forerunners of ‘Files-on-Parade’.

Status of the poem

As the first of Rudyard Kipling’s poems to incorporate the views and the dialect of the ordinary soldier with, for the times, an almost unimaginable subject matter, “Danny Deever” struck the English reading public as astonishingly and dramatically different. It was widely acclaimed when published and has since been singled out by critics and poets alike as one of Rudyard Kipling’s outstanding works:

…Danny Deever’ appeared in [Henley’s] Scots Observer on 22 February [1890] and astonished the critics. According to legend, it made Henley stand up and dance on his wooden leg, while Professor Masson, the grave commentator on Milton, waved the paper before his delighted students, crying: ‘Here’s Literature! Here’s Literature at last!’ [Charles Carrington]

(Of) … four or five masterpieces … the most poetical, in the sense of being the most imaginative and heightened in expression, is ‘Danny Deever’.”
[Lionel Johnson in The Academy, Vol XLI, 28 May 1892]

Danny Deever alone is a masterpiece hard to parallel. … the humour adds awful force to the tragedy so wonderfully told.
[Letters to Eminent Hands; to whit, Andrew Lang and others, by ‘i’ (Gleeson White), F. Murray, Derby, 1892]

The Barrack Room volume does indeed contain verse for which ‘splendid’ is the only term – so radiantly it glitters with the incrustations of barbaric words. It has genius in it, of course, in the grim effectiveness (for example) of ‘Danny Deever’.
[Arthur T Quiller-Couch (‘Q’), quoted in Kipling, The Critical Heritage, Ed. Roger Lancelyn Green, Barnes & Noble, New York, 1971]

One of the most interesting exercises in the combination of heavy beat and variation of pace is found in ‘Danny Deever’, a poem which is technically (as well as in content) remarkable. The regular recurrence of the same end-words, which gain immensely by imperfect rhyme (parade and said), gives the feeling of marching feet and the movement of men in disciplined formation – in a unity of movement which enhances the horror of the occasion and the sickness which seizes the men as individuals; and the slightly quickened pace of the final lines marks the change in movement and music.
[A Choice of Kipling’s Verse, T.S. Eliot, Faber and Faber, London, 1941]

The poem deals with a military execution of a soldier for a civil offence, namely murder. Under the Army (Annual) Act 1881, re-enacted annually, all ranks of the army were subject to both civil and military law and under certain circumstances could be charged in a military court with committing a civil offence. Murder within the unit when overseas was dealt with in such a way. Although public executions had ceased in Britain in 1868, military executions overseas were carried out in the presence of the garrison, though not the general public. However, recourse to the death penalty was not that common, 37 men being executed between 1865 and 1898.

There is no evidence that Rudyard Kipling ever saw a military hanging. That he was well informed on the details is borne out by the closeness of his description of events and mood to that given in an eyewitness account (first reprinted in the Kipling Journal No 110, July 1954) of the execution of Private Flaxman, of the 2nd Battalion, The Leicestershire Regiment, for the wilful murder of a lance-sergeant of the 1st Battalion. The execution took place at Lucknow in India on 10 January 1887. The garrison paraded at 8.15 a.m. and the band played the “Dead March in Saul” as the condemned man was marched onto the parade ground with his coffin on a gun carriage in front of him. After the execution, the garrison was marched off parade past the scaffold on which the corpse of the executed man still hung.

That Kipling may have seen an account of this particular execution is made more likely since the accused in this case was reported to have been one of three men who ‘dealt a pack of cards and agreed that the one with the ace of spades should shoot the sergeant’. Rudyard Kipling introduced an identical situation into his story “Black Jack”, which first appeared in the Indian Railway Library edition of Soldiers Three in 1888.

Renewed speculation in the Kipling Journal No 228, December 1983, about Kipling’s source for Danny Deever, citing a report of another military hanging in 1888, prompted Lisa Lewis to write a letter, printed in the March 1984 issue, drawing attention to the original article in 1954. This letter included a fuller version of Pte Flaxman’s execution and the parallels are so close to the poem that they cannot be just a coincidence. I am grateful to Lisa Lewis for drawing my attention to this.
The Military Setting

The setting of the poem is a battalion paraded in a hollow square. In the 1880s, infantry battalions paraded in the formation in which they expected to fight in battle, that is, in a line of companies side by side with the colours in the battalion center. Each company was in two long lines, or ‘ranks’, and each pair of men, one behind the other, formed a ‘file’. The company commander, a captain, was at the right of the front rank. One sergeant was immediately behind him with the subaltern officers and the rest of the sergeants spread out along the length of the company in a supernumerary rank to the rear. The battalion Pioneers and the Band and Drums paraded in the center in rear of the colours.

The diagram below from ‘Field Exercises and Evolutions of Infantry 1877′, shows a battalion of six companies in this formation. Also shown is the battalion in column of companies, the formation in which the battalion would have marched past the scaffold and off parade. 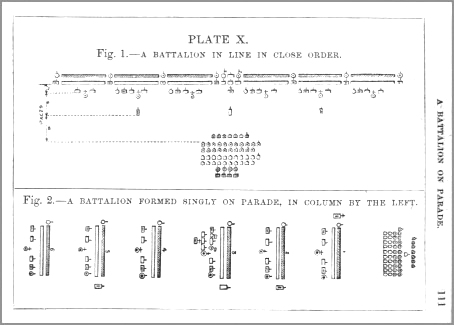 A British infantry battalion in India in the 1880s had a strength of 915 all ranks in eight companies. To form a hollow square, such a battalion would have had the two flank companies on each side wheeled forward to face inwards at right angles to the line, in fact, forming a hollow rectangle. The gallows would have been in the center of the open side. 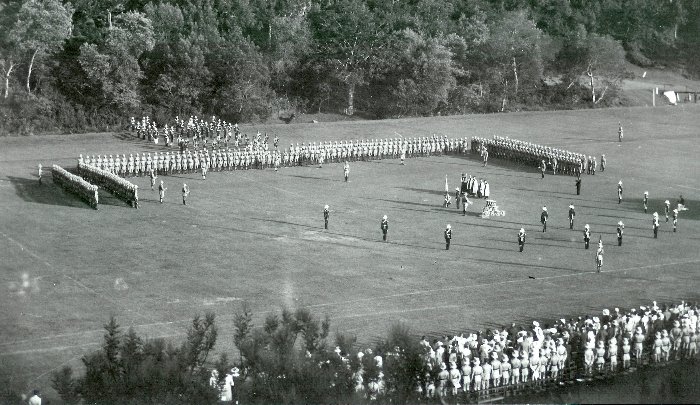 This photograph is of the 1st Battalion, the Inniskillings, drawn up in hollow square at Secunderabad in the period 1912-1914. It was taken just before a drum-head church service with the colours and chaplains in front of the drums and the buglers in an arc behind them. It clearly shows how the gallows, sited where the colours can be seen, would have been the unavoidable focus of the battalion’s view. By 1912 the officers paraded in front of the ‘files on parade’ instead of in the rear but otherwise the layout was as in 1888. The Colour-Sergeant of the left-hand company can be clearly seen in his traditional place behind the rear rank. (Photo courtesy of Colonel W.J.Hiles, Colonel of the Inniskillings)

The strength of a company or battalion on parade was reported in such a way that it indicated the frontage of the unit available to face an enemy. This was a count of the number of files, one man behind another, in the ranks. This report would have been in the form ‘So many files on parade.’ Hence Rudyard Kipling’s use of this term to represent the soldier in the ranks. It was because the officers and sergeants were not included in this report that their rank was called ‘supernumerary’.

The Colour Sergeant was the senior NCO of each infantry company. When on parade he was the right-hand NCO of the supernumerary rank of each company. The duties of the supernumerary subalterns and sergeants included ‘correcting any mistakes that may occur during maneuvering and take note of awkward men’.