[Page 173, line 1] Devadatta an approximate contemporary of The Buddha in the fifth and sixth centuries B.C. and believed to have inspired some of the Jatakas or stories of previous Buddhas.

[Page 173, lines 2-4] Strickland the police-officer who has a Preface to himself in ORG (Vol. 1, p.16) and also appears in “Miss Youghal’s Syce” “The Bronckhorst Divorce-Case” (Plain Tales from the Hills) “The Mark of the Beast” and “The Return of Imray” in Life’s Handicap, “The Son of his Father” in Land and Sea Tales and Kim.

[Page 173, line 6] Weston-super-Mare a seaside resort in Somerset in the West of England.

[Page 173, line 10] harriers packs of hounds for hare-hunting – the followers are on foot.

[Page 173, line 12] that Infant a character in the ‘Stalky’ stories who appears in “A Conference of the Powers” (Many Inventions) “Slaves of the Lamp part II” (Stalky & Co.) and “The Honours of War” in A Diversity of Creatures. He is probably based on a contemporary of Kipling’s at United Services College.

[Page 173, line 13] Eustace Cleever appears in “A Conference of the Powers” mentioned above.

[Page 173 , line 19] Sprue a tropical disease with ulcerated mucus membrane of mouth and chronic enteritis, endemic in India at the time. 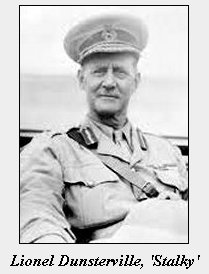 [Page 174, line 14] Dupé We have not located a place of this name in the Horn of Africa. However, without the accent, a ‘dupe’ is a person who has been deceived or swindled so perhaps this is a play on words .Young Strickland is being led astray or duped by the conspirators purporting to offer slaves for sale so he can accept the money with an easy conscience.

Somilaland is now the Democratic Republic of Somalia on the east coast of Africa.

[Page 174, lines 17-18] three thousand miles out … Kipling seems determined that we shall not know the precise location of the story.

[Page 175, line 9] tonneau the rear seats of a car of the time – usually open to the elements.

[Page 175, line 17] Dalhousie a hill-station in Himachal Pradesh – scene of “The Son of His Father” See Note to Page 173, lines 2-4 above, “The Arrest of Lieutenant Golightly” (Plain Tales from the Hills) and Kim.

[Page 176, line 14] marigolds any of several plants of genera Calendula and Tagetes with yellow or golden flowers and occasionally the only flowers available in India in the hot weather. Ralph Durand notes (p. 6): ‘In most parts of India it is practically impossible to grow turf. Graves are, therefore, often planted with marigolds.’

[Page 177, line 12] Manchester The city in the north of England which at that time was the centre of an important world-wide trade in cotton.

[Page 177, line 13] Sea Island cotton a fine variety of long-stapled cotton grown on islands off the coast of Georgia and South Carolina in the United States.

[Page 177, line 33] Every dog has his fleasan echo of part of ‘Siphonaptera’ by Augustus de Morgan (1896-1871) ,mathematician and humorist who also wrote on Murphy’s Law which can be summarised as “If anything can go wrong, it will.)

[Page 179, line 1] two electrics broke out she switched the lights on.

[Page 179, line 3] self-playing attachment a cabinet with a perforated paper roll which admits air to the mechanism and actuates ‘fingers’ which press on the keys to produce the desired notes. Known as a ‘Pianola’ when applied to a pianoforte.

[Page 179, line 5] Sheshaheh (The spelling varies.)
Sheshach, whose king is mentioned in the Hebrew Bible in Jeremiah 25:26, is supposed to be equivalent to Babel, according to a secret mode of writing practiced among the Jews of unknown antiquity, which consisted in substituting the last letter of the Hebrew alphabet for the first and so on. .(Wikipedia)

[Page 181, line 28] fourteen thousand rupees There were some 15 rupees to the pound sterling, so this was a considerable sum. In the company of Anglo-Indians it would have been normal to express money values in rupees.

[Page 182, line 30] sarkied explained in the text. Dr Sheehan classifies this as an unknown poison.

[Page 183, line 10] thuggee murder and robbery carried out by a sect in India that worshipped Kali – see
Hobson-Jobson p. 915.

[Page 184, line 13] the Fork as explained below, a piece of timber chained to the necks so the unfortunate prisoners could walk but not escape.

[Page 184, line 23] backing your topsails an old custom whereby foreign vessels in British waters (or any waters by some accounts) saluted British warships or risked being fired into. Now the custom is to dip the ensign.

[Page 184, line 27] smoking ‘em out a figure of speech for clearing the ground of enemy soldiers, a reference to bee-keeping where a ‘smoker’ emitting the fumes of smouldering cardboard etc. is used to stupefy the bees so the honey can be harvested or work carried out on the hive. See The Mother Hive, Actions and Reactions, page 94, line 4

[Page 185, line 3] turned up trumps in various card-games, a ‘trump’ is a card of a suit that takes any card of other suits; in this context meaning better than expected.

[Page 185, line 27] paid up cash like a motorist in those early days motorists were often taken to court and fined for speeding and other offences – see “The Village that Voted the Earth was Flat” (A Diversity of Creatures)

[Page 185, line 24] French territory ORG is inclined to place the scene of this story on the West Coast – see page 183, line 22 above and the headnote.

[Page 186, line 32] ’84 see “Miss Youghal’s Syce” (Plain Tales from the Hills) and ORG Volume 1, page 16, the ‘Strickland’ preface. The story in which he first appeared was published in The Civil and Military Gazette in 1887 but Kipling may well have quoted the date from memory.

At two o’clock in the morning, if you open your window and listen,
You will hear the feet of the Western wind that is going to call the sun.
(“The Dawn Wind”).

[Page 191, line 28] Job see the Book of Job in the Old Testament. His patience under suffering was proverbial.

[Page 193, line 22] stabbed the letter on the file essentially a length of wire with a sharp point on a wooden stand

[Page 193, line 25] ambergris a waxy substance found in the sperm whale – such an ornament would be made of amber, a fossilised gum from coniferous trees which is found on the shores of the Baltic and used for jewellery.

[Page 194, line 17 et sequ.] I am a poor man Adam and his Chief would have been talking in English so it is not clear how far Imam Din understood the conversation.