[Heading] This must have been a genuine soldiers’ song – see Kipling’s letter to Sir Herbert Stephen of 25 October, 1913 (Letters 4, Ed. Pinney p. 206.) ‘Jain ‘Ardin’ was never included by Kipling in any of the collections of his verse.

Orldershort a slang pronunciation of Aldershot, the home of the British Army in Surrey since the Crimean war in the 1850s.

[Page 205, line 1] Circasian Circle a dance of fairly recent introduction at the time of the story and one in which all the company could join.

It is perhaps not surprising that the narrator got in a muddle and put everybody out.
Many versions have evolved over the years and from various countries – this is one that would be danced to a jolly reel or other music in quick time. Circasian comes from the country in between the Black Sea and Mt. Elbruz which was the Russian Province of Kuban: the men were noted for their independence, the women for their beauty and many were taken to Baghdad as slaves and dancing-girls. Sergeants’ Mess dances frequently adopted some new formal steps of the type of La Volita.

[Page 205, line 8] stuff in this context, cloth – probably implied that it is not of very good quality.

[Page 205, line 11] cant the author is making a deliberate mistake by beginning to say ‘canteen’ and then changing to ‘refreshment-table’; what Mulvaney, a private soldier, was doing at what appears to be a dance in the Sergeants’ Mess is unclear. With his record of drunkenness it is unlikely he would be serving at the bar. (See “The Courting of Dinah Shadd” ).

[Page 205, line 13] Jhansi the girl is named after the place she was born, a railway-junction 120 miles south of Agra, Central Province. See KJ 280/59 for an interesting example of children being known in the family after the places where they were born, but not so christened.

[Page 206, line 6] pack-drill punishment-drill in Full Marching Order – in the case of Mulvaney it would usually be for drunkenness. See “Black Jack” in Soldiers Three. See also the poem “Cells”.

[Page 206, line 14] Ould Pummeloe In rendering Mulvaneys Irish accent Kipling commonly writes ‘ould’ for ‘old’. Pummeloe is the name of a fruit, pommelo, pamplemoose, or grapefruit, (citrus decumana), the largest of the oranges, growing to the size of the head of a ten-year-old child and having a sweet and sour flavour like unripe grapes. With a variety of names in various countries, some maintain that it came from the Malay pumpulmas, and was taken to the West Indies by a Captain Shaddock, where it is known by his name. [Hobson-Jobson] Mrs. McKenna’s nickname obviously derived from the size of the fruit. (See Page 207, lines 9 and 10).

[Page 206, line 19] artillery-bridge Usually a bridge of boats of more substantial construction than a bridge intended for infantry.

[Page 206, line 26] no call for to marry It is most likely that Kipling was reflecting the changed conditions of service brought in by the Army Enlistment Act (1870), one of Edward Cardwell’s reforms as Gladstone’s Secretary of State for War. This introduced the short service engagement, half of which was to be served in the Reserve Army. The initial period for the Infantry was 12 years, the first 6 to be with the Colours, and this was unchanged in Kipling’s day. It took time for the older soldiers on 18 year engagements with the Colours (such as Mulvaney) to work their way through to a pension and for the 6-year men to preponderate, as they did by the mid-1880s. Technically, the first three years of service should have been served in the Home battalion of a regiment and the last three in the overseas battalion. In fact, a shortage of recruits for the new engagements and increased commitments overseas meant that many battalions overseas received drafts of recruits just out of basic training. The problems that this caused is the setting for the story “His Private Honour”. Either way, there was no incentive for young soldiers to marry, since they only had 6 years to serve and possibly a change of station in the middle. In addition, infantry battalions were limited in the number of wives they could have ‘on the strength’. This is the reason that ‘a Troop-Sergeant’s widow’s the nicest, I’m told’ was true, since she was already on the strength and had worked her way up the wives’ hierarchy/pecking order, which made life much sweeter. [R.A.]

[Page 206, line 30] Corp’ril Corporal; a non-commissioned rank below a Sergeant.

[Page 207, line 2] Colour-Sar’jint The rank of Colour Sergeant was introduced into the Guards and Infantry by a General Order of 6 July 1813, initially as a post of honour as a reward for distinguished service. By Kipling’s day, Colour Sergeant was the senior rank attainable as a non-commissioned officer. The badge of rank was 3 chevrons under a crown and crossed Union flags. In an infantry battalion each Company had one Colour Sergeant. His equivalent in the Prussian Army of the day was known as ‘mother of the company’ and this could easily have been applied to the Colour Sergeant. (See my notes to “Danny Deever”) A Colour Sergeant’s wife worth her salt would have similarly been the woman to whom the company wives would have looked for leadership, although she in turn would have looked to the Company Commander’s wife. This was still often true when I joined the army in the early 1950s. In my first regiment, the wife of the 2i/c (the Second-in-Command) was known as the ‘3i/c’ (we had a bachelor colonel) and the wife of one of the Sergeant-Majors was known as ‘4i/c’.

Colour Sergeants did not carry the Colours. That was and still is done by an Ensign (hence the name) or a Second-Lieutenant. Colour Sergeants provide the escort to the Colours. The last time that the Colours were carried into battle by a British regiment was in 1881, when the 58th Regiment, later the Rutlandshire Regiment and by 1914, part of the Northamptonshire Regiment, suffered heavy loss at Laing’s Nek on 28 January of that year in the first South African War, 1880-1881. Boer rifle fire at close range more than decimated an old style frontal charge. Some lessons were learned, including the futility of carrying the Colours into battle but the fact that magazine rifles could be equally devastating at long range was not learned until the Second South African War, 1889-1902. [R.A.]

[Page 207, line 6] Portarlington a town in the Republic of Ireland (Eire), on the River Barrow, 42 miles from Dublin.

[Page 207, line 17] Colaba on the very point of Bombay Island where the Fort used to be.

[Page 207, line 19] Presidincy Presidency – the three great divisions of India under the East India Company were the ‘Presidencies’ of Bombay, Calcutta and Madras, each containing many towns and cities. Mulvaney is exaggerating the number of places where McKenna’s children might have been born.

[Page 207, line 20] Whin the childher wasn’t bornin’… This translates as: ‘When the children were not being born, they were dying, for if our children die like sheep to-day, they died like flies then.’ See “The Courting of Dinah Shadd” in Life’s Handicap for Mulvaney’s marriage and the death of their child who was given his mother’s maiden name (spelt there with two d’s.) See also “Tods’ Amendment” in this volume (Page 198, line 13) for the dreadful death-rate among children in India, both civilian and military.

[Page 207, line 26] I’m digresshin…. ‘I’m digressing – one devilishly hot summer some idiot whose name I don’t remember ordered the regiment up-country possibly to try out a troop-movement by the new railways’. Jhansi was four years old at the time, so these events would have taken place in 1867 or so when the Indian railway system was being developed by private capital with government guarantee. The first twenty miles of track, between Thana and Bombay, was opened for traffic in 1853, and by 1869 some 4,000 miles were working.

Although they were primarily intended for commerce, the routes were planned with military advice and seldom entered Indian cities, stopping on the outskirts in fortified stations.

Some of the major terminals, though, like this one in Bombay, were magnificent monuments, expressing the grandeur and confidence of the Victorian Railway Age. 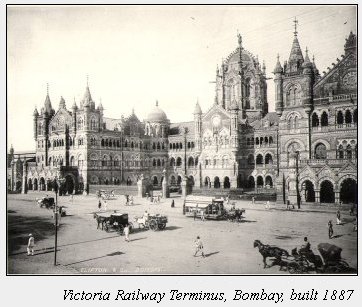 The last main line, through the Khyber Pass, was completed in 1926. There were also feeder lines, usually narrow-gauge, in the Native States. (See the poem “Public Waste” ) The grand total was over thirty thousand miles, from the Khyber Pass on the border with Afghanistan, to Cape Cormorin in the South. (Jan Morris and Simon Winchester, Stones of Empire, The Buildings of the Raj, O.U.P., 1983 p.124.)
See also “The Bridge-Builders” in The Day’s Work and, for some rail travel, Kim.

[Page 208, line 6] Saint Lawrence martyred by being broiled on a gridiron over a fire.

[Page 208, line 11] twelve women the very strict class-distinction of the day would call the wives of the rank and file ‘women’, and those of the non-commissioned officers ‘wives’, while the officers would have ‘ladies’. See the poem “The Ladies”.

[Page 208, line 15] belly of the thrain Kipling writes ‘thrain’ for ‘train’, as pronounced by Mulvaney. This is an echo of Jonah 1, 17 and Matthew 12, 40, where Jonah found himself in the belly of the whale. On a lighter note, see also “How the Whale Got his Throat” in Just So Stories.

[Page 208, line 25] telegrapt a telegram. See “His Chance in Life” earlier in this volume.

[Page 208, line 30] naygur Nigger – an offensive expression for a black skinned person, not now acceptable anywhere, but common in the southern states of America until the 1950s, and sometimes used by soldiers in India of Kipling’s day to refer to Indians. The British soldier of those times was not well informed about Indians.

[Page 209, line 14] tope in this context, a grove or orchard, usually of mangoes, from the Tamil toppu. [Hobson-Jobson]

[Page 209, line 30] lotah the small round brass pot which Hindus use for drinking and sometimes cooking.

[Page 210, line 2] rigimint of women an echo of the famous pamphlet by John Knox, The First Blast of the Trumpet Against the Monstrous Regiment of Women (1558). ‘Regiment’ in this case means ‘rule’ and not a military formation.

[Page 210, line 31] St. Pether’s gate St. Peter – by Christian tradition the keeper of the entrance to Heaven. See “On the Gate” in Debits and Credits, and the poems “Dinah in Heaven” and “Jane’s Marriage” .

[Page 211, line 6] the worrud av the Church the Word of the Church – comforting him with a prayer.

[Page 211, lines 17 – 20] quarintin’… ‘if you will believe me, the track of the sickness in the camp was for all the world the track of a man walking four times in a figure-of-eight…’

[Page 211, line 21] Wandherin’ Jew the first mention of the legend of the ‘Wandering Jew’ is ascribed to Matthew of Paris who received it from an Armenian bishop in 1228. The Jew was said to have been a doorkeeper at Pontius Pilate’s palace. He turned up in Hamburg in 1547, giving his name as Ahasuerus and said he had been a shoemaker in Jerusalem, and had refused to allow Jesus to rest at his door when He was carrying the Cross to Golgotha. Jesus had said to him “…thou shalt tarry till I come again…” and ever since he had wandered through the world. There have been other stories of appearances of the Wandering Jew, and other legends of deathless kings, heroes like Arthur and prophets like Elijah, etc. See Kipling’s story “The Wandering Jew” in Life’s Handicap; also the poem “Army Headquarters” for Kipling’s use of the name ‘Ahasuerus’.

[Page 211, line 26] she b’longs to B Comp’ny adopted as a mascot by ‘B’ Company, in memory of Colour Sergeant McKenna and Ould Pummeloe.

[Page 211, line 29] belted in this context, beaten pretty heavily with the fists or a belt. Leather belts with big brass buckles could do a lot of damage (See the poem “Belts”. )

[Page 212, line 14] Comissariat an’ dhrive a buggy with his – savin’s he is a smart young fellow and will get into the Commissariat (where there were opportunities to make money} and drive his own cart with the proceeds. (See the poem “The Sergeant’s Wedding”, for a similar lucrative career running the canteen.)