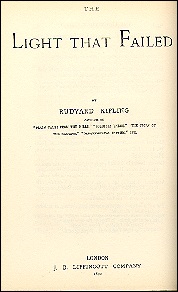 (This is the Title Page of the copyright edition, from the Livingston Bibliography.)

The story begins in a paradigm shift at the nineteenth century’s end in the publishing world’s manner of engaging the reading public.

Light fiction in the late Victorian age was purveyed principally in the monthlies [magazines] which enterprising publishers used for launching new authors and testing new lines of appeal to public taste,…something brisker and livelier than the decorous three volume novels which the circulating libraryies had distributed to the genteel public in the previous generation.”

The American publisher J.B. Lippincott was a market leader in such ventures, issuing a monthly magazine simultaneously in New York, London and Melbourne (using Ward, Lock, Bowden & Co. as the publisher in Great Britain and Australia), with a complete novelette by a reputed author in every number.

Eighteen-ninety was a spectacular year for Lippincott’s with its new story format of 50,000 to 60,000 words, beginning with A. Conan Doyle’s The Sign of Four, continuing with Oscar Wilde’s Dorian Gray, and ending on the December newstalls with the January 1891 issue containing The Light That Failed, on pp. 3-97 of the 144-page magazine.

The American publisher S.S.McClure, who was to serialize Kipling’s Captains Courageous in his own eponymous magazine in 1897, having paid the author $10,000 for those rights that year, noted in his Autobiography [1914] that Lippincott had paid Kipling only $800 for this 1890 effort. In the Harry Ransom Center at the University of Texas in Austin is an autograph letter of 11 December 1890 from Coulson Kernahan, the English Editor of Lippincott’s (and later author of ‘Nothing Quite Like Kipling Had Happened Before’, published in London in 1944) to Robert Barr (whose story “One Day’s Courtship” was to appear in the same January 1891 issue under Barr’s pseudonym Luke Sharp).

“We have a banger for our Jan’y No. It is called ‘The Light That Failed’ & is specially interesting as K’s first long novel. His ‘nervous English’, unrelenting realism & terrible truth to nature are seen at their best in it; and I am inclined to think that like most first novels it is partly autobiographical.”

This letter continues with the news (confirmed and amplified in Coulson’s later book) that Kernahan had advised James Bowden, the Managing Director of Ward, Lock & Bowden, to double the usual print run of the January issue of the magazine, from 10,000 to 20,000 copies; however, due to Kipling’s desire to add a chapter at the last moment, Kernahan in his letter doubts that the issue will appear before Christmas.

Contemporary newspaper comments stated that Kipling first wrote the story with the tragic ending – the blind artist-adventurer Dick Heldar’s death in battle – but, fearing this was too sad for public consumption, changed it for the serial publication so that the hero and heroine get decently engaged to be married on the last page. The first edition of The Light That Failed was a copyright issued prepared in London by Wolcott Balestier, the American working there as agent for New York publisher J.W. Lovell (whose American paperback book edition of the Lippincott twelve-chapter “happy ending” text was delayed to permit the magazine to appear first).

Balestier made up six copies, filing one for deposit in the British Museum on 7 November 1890.

In stone-gray wrappers, it has 82 pages and is lettered on the front cover with the types of the title page (in the Kipling bibliographies, Livingston 61, Stewart 81). 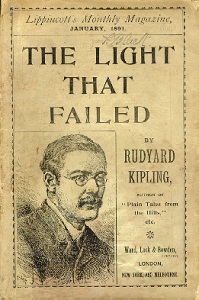 The Australian issue is considered to be the first issued to permit sale before the January cover date, and is the rarest of the three.

It is not found in any institutional Kipling collection, is not physically described in any Kipling bibliography, and has appeared at book auctions only twice in the last century.

It measures 9 by 6 inches, in pale gray wrappers printed in black, with a portrait of Kipling by V. Gribayedoff (reduced in size from that appearing as a frontispiece inside) in the lower left quadrant. It has no title/contents page, and no advertisements, except those inside the covers and on the back cover, which name Australian cities. 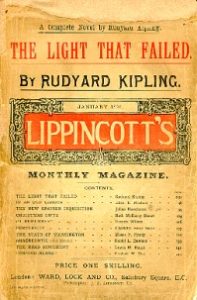 The London issue Lippincott’s, sold for a shilling, is slightly larger (9 1/8 by 6 inches), and its buff-colored wrappers are printed in black with the word ‘Lippincott’s’ in a reverse cut on a red field (Livingston 62, not in Stewart.

Its three leaves of advertisements include a Sampson Low, Marston ad for the English editions of the Kipling Railway Library series, and the title page appears before the Kipling portrait frontispiece, which is printed on coated paper heavier than the text leaves and faces the first text page.

L The English edition of the magazine is missing in its first issue the date line ‘January 1891’ on p. 3, found below the title on the identical page in the American edition. 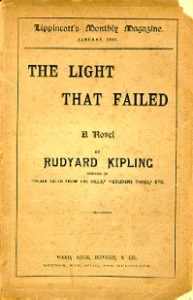 The English edition of the magazine, appearing in December 1890, was reprinted five times in January 1891, in larger buff wrappers (9 3/4 by 6 inches) printed solely in black (no red reverse cut), with ‘Lippincott’s Monthly Magazine’ at the front cover’s top and ‘Ward, Lock, Bowden & Co., London, New York And Melbourne’ at the bottom, now bearing the date line on p. 3, but without any portrait frontispiece and without advertisements except on the inner and back. covers.

This issue was slightly mis-described in and as Stewart 82, but correctly noted and described by the Kipling/ R.L. Stevenson bibliographer W.F. Prideaux in Notes And Queries for February 1, 1902.

In his 1944 book, Coulson Kernahan writes that over 100,000 copies were sold in all. Some issues of the English magazine edition are known rebound in black cloth by Mudie’s, the circulating library.

The Mudie’s issues lack the advertisements, and the frontispiece is relocated to precede and face the magazine title page instead of the first text page.

Collectors also occasionally find the very first issue, from December 1890, rebound without the paper magazine covers in cloth or leather boards, demonstrating that some readers were not content to wait for the later publisher’s hardbound issue–which when it appeared came out in the fifteen-chapter sad ending!). 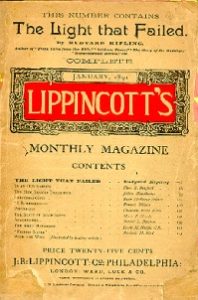 The New York issue of the magazine (Martindell 98 [he cites only this American issue], Livingston 62 note, and Stewart 83), priced at twenty-five cents, is also in buff wrappers (9 1/8 by 6 inches), its cover printed in black with ‘Lippincott’s’ in a reverse cut on a red field, and contains the frontispiece portrait.

Its advertisements are more numerous (19 leaves, 9 of them tinted), and the ‘January 1891’ date line is found on page 3.

A complete copy includes an insert between the frontispiece and the title page, entitled “Good News To Literary Workers”, being an advertisement from the publisher supporting passage of the International Copyright Bill, which was ultimately approved by Congress effective 1 July 1891. This Bill was finally to give Kipling some surcease from the American pirate publishers who so plagued his early career.

But that, as the master says, “is another story”, to be continued next time with regard to the book editions of The Light That Failed.