Other titles for the poem include ”Shakespeare and “The Tempest”, “The Vision of the Enchanted Island”, and “The Birth of ‘The Tempest’.

[Verse 1] the Bermudas a group of islands in the Atlantic Ocean some 600 miles off the coast of the United States.

Swabber one who washes the decks, etc.

Southwark then a suburb of London, on the South bank opposite 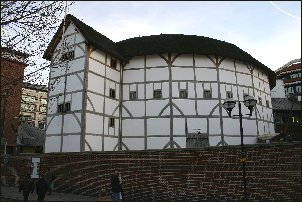 the City The City of London. The Globe Theatre, where many of Shakespeare’s plays were staged, was outside the jurisdiction of the Lord Mayor . A replica of the theatre (right) was opened in 1997 in the South Bank of the Thames.

[Verse 6] Mulled sack a white wine from Spain, warmed up with spices – a ‘punch’.

[Verse 7] A Coiner One who makes counterfeit money – in this context, however, a writer who turns a plain narrative into a wonderful story, like Shakespeare – or Kipling.

[Verse 8] A crown or five shillings, twenty-five pence in decimal currency, worth some £45 in 2008 values.

We bit them and rang them tests for counterfeit coins.