First published in The Years Between (1919). Collected in:

This poem is Kipling’s attack on the Pope’s neutral attitude to the War.
The Pope is the traditional successor to St. Peter, to whom Jesus gave the keys of Heaven, naming him as the “rock” upon which the church would be built. (Matthew 16,18-19) So Kipling uses the figure of Peter to stand for the Pope in the poem.

Pope Benedict XV (above) was elected on 3 September 1914, just a month after the War began. He repeatedly called for peace, but refused to criticise either side – to such an extent that each side accused him of supporting the other.

The Central Powers referred to him as “der franzosische Papst” (i.e., the French Pope) while Georges Clemenceau, premier of France 1917-20, called him “le Pape boche” (“boche” being the derogatory French term for the Germans, equivalent to the English “Hun.”)

Kipling blamed the Pope for not condemning the German atrocities in Belgium in 1914. He reverted to the subject in Souvenirs of France (p.13), published as late as 1933:

The specific charges of our “atrocities” during the war revealed, though we had not sense enough to profit by it, the Boche mentality. For example, there was a statement that on a certain day, at a certain place, some English officers entered a Boer farmhouse which was flying the white flag. Names and dates were entirely true. (I was with the party and shared the “honours” of the action.) It went on to say that we had dragged out two or three Boer men and women from under the beds there; had given them a hundred yards’ allowance and shot them down as they ran! In other words, it prefigured absolutely the technique of Louvain and Termonde and the villages of the Border in ’14, etc., etc.; the touch about the “hundred yards’ allowance” being a sporting attempt to dress the dish à l’anglaise. 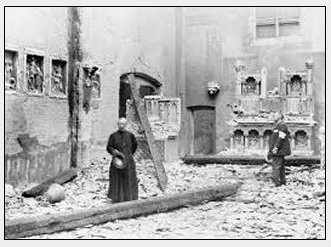 The mention of Termonde is interesting in the context of the present poem, where Tirmonde (sic) is named in the last line of Verse 5 as the site of the slaying of maidens and wives. At Aerschott, (named in the same line) the Germans killed 156 civilians including women and children. Termonde is more notorious as one of the first towns to be bombed from the air. A well-known photo (right) shows a priest in the ruins of his church there, in 1914.

But the trigger for this poem was the Pope’s attempt to broker a negotiated peace in 1917. Kipling believed that the Germans were “Evil Incarnate”. They had to be utterly defeated. To settle for anything less would be a betrayal of all that the Allies were fighting and dying for. See the Notes on his poem “Justice”.

When Jesus was arrested in the garden of Gethsemane and taken to be tried before the High Priest, all his disciples deserted him and ran away. St. Mark (Ch. 14) takes up the story:

54. And Peter followed him afar off, even into the palace of the high priest: and he sat with the servants, and warmed himself at the fire…
66. And as Peter was beneath in the palace, there cometh one of the maids of the high priest:
67. And when she saw Peter warming himself, she looked upon him, and said, And thou also wast with Jesus of Nazareth.
68. But he denied, saying, I know not, neither understand I what thou sayest. And he went out into the porch; and the cock crew.
69. And a maid saw him again, and began to say to them that stood by, This is one of them.
70. And he denied it again. And a little after, they that stood by said again to Peter, Surely thou art one of them: for thou art a Galilaean and thy speech agreeth thereto.
71. But he began to curse and swear, saying, I know not this man of whom ye speak.
72. And the second time the cock crew. And Peter called to mind the words that Jesus said unto him, Before the cock crow twice, thou shalt deny me thrice. And when he thought thereon, he wept.

“Ille autem iterum negavit.” Latin for “And he denied it again” see 70

Gethsemane the garden where Jesus was arrested,
see 66-67.

the Throne symbol of the Pope’s rule as head of the Catholic Church.

the Keys the keys of the kingdom of Heaven given by Jesus to Peter (Mat. 16. 19), symbol of the Pope’s power as Peter’s successor

Mary the Mother the Virgin Mary, mother of Jesus

Tirmonde (now Termonde) One of the first cities to be heavily damaged by aerial bombing in the course of Germany’s attack on neutral Belgium.

Aerschott The first town in Belgium to suffer a mass execution. On 19 August 1914, the Germans killed over one hundred and fifty of the inhabitants, among them eight women and several children. This is one of the German atrocities against which the Pope should, in Kipling’s opinion, have protested forcibly.

The Babe in the Manger Jesus. When Jesus was born, he was laid in a manger, Luke 2.7.

the waters had covered them German submarines sank several passenger liners. The most notorious was the Lusitania in 1915, when 1,198 people drowned, including a number of children.

The Father took from him the Keys and the Sword As punishment, God takes away all the Pope’s authority and power.

“Then Simon Peter having a sword drew it, and smote the high priest’s servant, and cut off his right ear”.

and the doctrine of the two swords.   I think Kipling has in mind above all the reduction of the papacy’s temporal power by the annexation of the Papal States. This pre-dated WW1 but was reinforced by the Vatican’s exclusion from the Conference of Paris. At the time of publication of Kipling’s poem, the Papacy still claimed that the Papal States were rightfully theirs.[D. H.]