The poem contrasts the present comfortable life of undergraduates at Oxford University with their past experiences as soldiers in the trenches in France and Flanders in World War 1. This theme is very similar to that of “The Scholars” (which comes immediately before it in Definitive Verse), about naval officers sent to Cambridge after the War, though with more about University life and less of their wartime experiences.

clerks of Oxenford Both “clerk” for a student (‘undergraduate’ as they are called at Oxford and Cambridge), and “Oxenford” for Oxford, are taken from Chaucer’s “Canterbury Tales”, where in the Prologue one of the pilgrims is introduced as: ‘A clerk ther was of Oxenford also’ [line 285].

unhelmeted it is now safe to go without the tin helmet that had always to be worn in the front line.

unbleached sward poison gas and the fumes of high explosives killed the grass round the trenches. 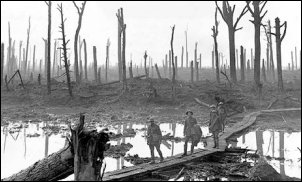 unshrivelled trees … For the leaves are on the bough, the bark is on the bole. The trees have not been blasted by gunfire.

One of the enduring images of the Western Front is of the remains of a wood with not a leaf or a branch on the trunks.

A ‘bole’ is the trunk of a tree 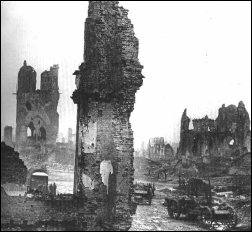 men’s housen stand all even-roofed and whole Every house within miles of the front line was completely ruined. ‘housen’ is an old-fashioned plural. meaning ‘houses’.

What vision … from any nearer fight They learn about furious fights of old (line 2) but never admit their own memories of their own battles.

Whose supplication rends the soul? Whose night-long cries repeat? They remember the cries of the wounded outside the trenches whom they could not rescue or help.

single meats One sort of food, whatever the carriers could manage to get up to the front line.

water streaked with blood Whatever they could get to drink, even from shell-holes

That three-day fast…. when all those guns said “Nay!” At the height of a bombardment, no food could get through to the front line.

no man bows his head dragon-flies flash like bullets but the clerks do not have to duck as they used to for real bullets. ‘bullet-wise’ like bullets.

Him Who died Jesus

Who set aside the world and died? They remember friends who died in the War.

What life shall please Him best? They wonder what they can do with their lives to make up for their friends’ sacrifice.

lie under bolt and bar Oxford and Cambridge colleges had (and still have) a strict curfew and the gates were locked when all students had to be inside.

rake the midnight clouds sweep the sky with gunfire as they did in the War.

chase a sliding star fire at a star, thinking it was the light of an enemy. See Kipling’s much earlier poem “Cruisers” (1899): ‘What chase ye? Their lights, or the Daystar low down?’.

In fear of fine the penalty for a breach of University rules (e.g. being out after approved hours) was a fine ‘of half-a-crown’. There were four crowns to a £ sterling before decimalisation. Half-a-crown was the equivalent of 12½ pence in todays currency, a significant sum in 1920 when many families subsisted on £2 or £3 a week. See Alastair Wilson’s notes on “The Scholars”

Who walks by dreams what ghostly wood in search of play-mate slain? Even in their dreams the students still relive the horrors of the War.