First published in the Daily Telegraph, April 19, 1917 and simultaneously in the USA in the New York Times with six four-line verses; the final two verses added in The Years Between, 1919. Published as a pamphlet: “The Hymn of the Free People” in America by Doubleday, Page in 1917, but suppressed on publication, no known copies extant. The poem was anthologised in A Treasury of War Poetry: British and American Poems of the World War 1914-1917 (ed. George H. Clarke: Houghton and Mifflin: Boston, 1917). [We are indebted to David Alan Richards for these details].

Written in April 1917, this is Kipling’s celebration of America’s entry into World War I, and his assertion of her moral, political and military responsibility as a great power, in alliance with Britain. In 1917, George H. Clarke, in his Introduction to A Treasury, wrote euphorically:

The new friendship of two great Anglo-Saxon nations which a book of this character may illustrate, is filled with such high promise for both of them and for all civilisation.

He later quoted the US Ambassador Walter H. Page, speaking to the Pilgrim’s Dinner in London on April 12, 1917, calling America’s decision:

For Kipling’s view of America’s responsibility as a power in the world, see “The White Man’s Burden”. (See also Martin Down in KJ 335.) For his sense of the affinities of kinship between British and American peoples, see “An Habitation Enforced” in Actions and Reactions.. 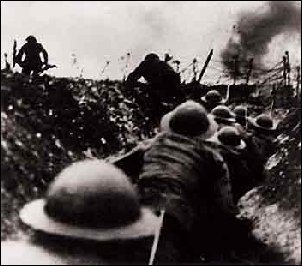 Early in 1917 the Great War was at its height. There was deadlock on the Weatern Front in France, where the armies of Britain France and Germany were battering at each other.

The cost in lives and resources was fearful. In 1916 the British had lost 420,000 casualties in a single battle, on the Somme (right). Kipling had lost his only son at Loos in 1915.

The United States had remained neutral, though American loans and supplies were a lifeline across the Atlantic for Britain, and the Germans has used their submarines to try to cut it by attacking shipping.

Their operations, in particular the sinking of the liner Lusitania in May 1915 with the loss of over a thousand lives, had outraged many Americans, and President Woodrow Wilson had described this as an act of piracy.

On 1 February 1917, the German Foreign Secretary sent a telegram to his Ambassador in Mexico declaring that Germany would wage unrestricted submarine warfare, and envisaging the possibility of an alliance with Mexico against the United States. British Intelligence intercepted the message, and passed it on to Washington.

The United States declared war on 6 April 1917, eventually drafting over two million troops into the conflict. Despite the collapse of the Russian armies on the Eastern Front after the Russian revolutiond in that year, the American commitment eventually helped to tip the scales of the war against the Germans. By the autumn of 1918 Germany had sued for peace. 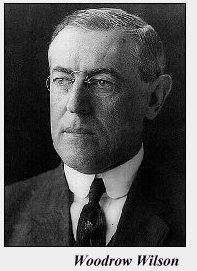 It is not easy to realise, in 2011, nearly a hundred years later, at a time when American world-wide commitments are so great, that the decision in 1917 to fight a war in Europe cut across deep-seated American historical instincts.

After the Peace Conference the United States retired into isolationism, declining to join the League of Nations (the forerunner of the U.N.), and only coming into World War II against Hitler after the Japanese attack on Pearl Harbour in 1941.

Kipling, who had an American wife, and had lived in New England for four years in the 1890s, was well aware of the differences as well as the affinities, between Americans and British. As David Gilmour writes (pp. 266-7):

Few things made Kipling angrier than the prolonged neutrality of
the United States. Wilson’s offer to mediate a `peace without victory’
rewarding neither side, together with his proposal for a post-war
league of nations, infuriated Kipling almost as much as his later
`idiotic’ Fourteen Points on the principles of a post-war settlement…

He was so relieved by the declaration of war that he did not carp about its tardiness or the reasoning behind the change of policy. `Don’t take the lateness … to heart,’ he told Forbes. There was still plenty of work to do, and America’s `value in the scheme of civilisation’ would be to `put in the coup de grace‘.
[memo of Cameron Forbes, Kipling collection, Harvard, cited by David Gilmour pp, 266-7].

The American Spirit Speaks This ‘voice’ as a sub-title echoes the poem “An American” (1894), which reflects Kipling’s awareness of contradictory American attitudes to Britain: those who shared his ‘Anglo-Saxon’ imperialist ideals and those who remained isolationist and anti-Empire. Peter Keating (p. 201) suggests that: ‘The true “American spirit” is shown as constantly in conflict with its “avatar’, the raucous anti-British democrat’.

In his notes accompanying a letter to Frank N Doubleday in March 1919, Kipling writes: ‘The italicized verses give a new version of the Doxology – Praise Father, Son and Holy Ghost.’ [Letters, Ed. Thomas Pinney (vol 4) , p 542]. The ‘doxology’ (hymn of praise) reads:

Praise God from whom all blessings flow
Praise Him, all creatures here below
Praise him above, ye Heavenly Host
Praise Father, Son and Holy Ghost.
[Thomas Ken, 1674]

Thomas Pinney observes (vol 4 p. 545, note 12): The New Version added to the Trinity is presumably ‘the God in Man displayed’ or ‘the Spirit that moves in Man.”

Kipling’s verses and the Doxology are metrically almost identical.

“Shall we recover … years” the years of neutrality. Kipling implies that this had been a nation brainwashed into avoiding its moral duty.

“His Mercy…again” Another implied rebuke, suggesting the need for contrition.

“With Freedom’s brotherhood” The Anglo-American alliance of free peoples. Mark Twain, who was friendly with Kipling, once described him as ‘the militant spokesman of the Anglo-Saxon races.’ [quoted by Howard G Fitzgerald in the Oxford Magazine LXXV February 1957; collected in R L Green, Ed/ (p.323)]

President Wilson, who was answerable to Italian, Irish, Scottish, Polish, Spanish, Jewish, German, and black Americans, as well as those of English descent, had a different perspective.

Daniel Hadas notes: ‘although only the last two stanzas are italicised, the doxology in fact comprises the last three stanzas, one each for Father, Son and Holy Ghost.  God in man displayed is of course the Incarnate Son. Although, as I understand it, Kipling wasn’t a Trinitarian Christian, he is here using language that would be palatable to orthodox Christians, as is understandable in a propaganda piece written for a still largely Christian British and American audience.’