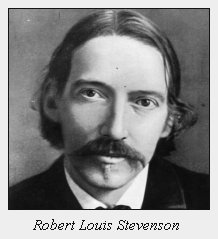 “R.L.Stevenson” Robert Louis Stevenson (1850-1894) celebrated and much loved Scottish writer of poems and stories, including Treasure Island and Kidnapped, whose works were much admired by Kipling. See “The Vortex” (A Diversity of Creatures).

Stevenson and Kipling corresponded, but in 1892 a plan to meet in Samoa where the former was living, came to nothing. See Charles Carrington (p. 203),

A child, gravely ill from T.B., has to stay out in the garden, since treatment at that time called for as much fresh air as possible. He (or perhaps she) is frightened by the passing motor traffic, and does not enjoy a ride in a car. He sees the aeroplanes overhead, zooming through the sky, and says that when he is strong enough he will go through the air up in the clouds instead.

T. B. Tuberculosis, or ‘consumption’ as it was called in the 19th Century, an often mortal disease of the lungs. See Dr Gillian Sheehan’s “Kipling and Medicine”. Stevenson suffered from T.B. and eventually died of it.

charabancs an early form of motor-coach, usually open with a hood, used for excursions. Charabancs figure in
“Beauty-Spots” (Limits and Renewals), “The Wish House” (Debits and Credits), and “The Village that Voted the Earth was Flat” (A Diversity of Creatures).

Croydon then an airport in South London formed from two adjoining World War I military aerodroms. The first airport in the world to introduce air traffic control, in 1921. It was was replaced by Northolt Aerodrome, and later by Heathrow, Gatwick, Stansted, and London City Airports.

Nursey a childish abbreviation of ‘Nurse’ – in this context one trained to look after children.