This poem was published in the second edition of Departmental Ditties and Other Verses in 1886. In the Edition de Luxe it is entitled “A Ballad of Burial”. See Pinney p. 63 and ORG Volume 8, page 5148 (Verse No. 218).

A jaunty piece of black humour in which a dying Anglo-Indian asks for his body to be packed in ice and taken up to Simla to be buried.

A ballade is a verse form dating back to mediaeval French poetry, typically consisting of three eight line stanzas, each ending in the same refrain, which serves as a leitmotif, and concluding with a four line ‘envoi’, addressed to a ‘Prince’, or sometimes a ‘Princess’.

It has been used by more recent poets, like Chesterton or Kipling, in light-hearted vein, sometimes in strict form, sometimes more loosely. As well as this poem, A Ballade of Jakko Hill is also included in his Definitive Verse. In his early experimental days he also wrote Carmen Simlaense , and A Ballade of Bad Entertainment, in which the refrain is in Hindustani: Khodawund, siruf murghi hai!. Two others, “A Ballade of Photographs” (1888) and “A Ballade of Indian Tea” (1889) can be found in Rutherford and Pinney.

In the present poem, the repetition of ‘for old sake’s sake’ at the end of each verse is all that is left of the ballade form.

In Kipling’s time in India, death was a constant companion for the Europeans who worked there, particularly in Summer in the Plains.

The four men in “ “At the End of the Passage” (Life’s Handicap p.184) come many miles to meet together once a week:

Hummil, the assistant engineer, was the host. He stood fast and received his friends thus every Sunday if they could come in. When one of them failed to appear, he would send a telegram to his last address, in order that he might know whether the defaulter were dead or alive. There are many places in the East where it is not good or kind to let your acquaintances drop out of sight even for one short week.

In “The Head of the District” in the same collection (p.119) Orde lies dying. He realises he is in debt and his friends will have to take up a collection to pay his widow’s passage back to England. He meditates:

‘It’s not nice to think of sending round the hat; but, good Lord! how many men I lie here and remember that had to do it! Morten’s dead—he was of my year. Shaughnessy is dead, and he had children; I remember he used to read us their school-letters; what a bore we thought him! Evans is dead—Kot-Kumharsen killed him! Ricketts of Myndonie is dead—and I’m going too. “Man that is born of a woman is small potatoes and few in the hill.” ‘

Death figures in Kipling’s poems too, for instance “The Story of Uriah”. In the Old Testament, King David wants to marry Bathsheba, and to get her husband Uriah out of the way he tells his general “Set ye Uriah in the forefront of the hottest battle, and retire ye from him that he may be smitten and die” (2 Samuel 11. 15). Kipling’s poem tells a similar tale, apparently based on a topical scandal. The lovers do not have to rely on the fortunes of war to get rid of an unwanted husband; they simply arrange for Jack Barrett to be transferred from cool healthy Shimla to Quetta down in the Plains and:

Jack Barrett died at Quetta
Ere the next month’s pay he drew.
The season was September
And it killed him out of hand.

Kipling’s bitterest depiction of death is tucked away in one of his lesser-known collections, Abaft the Funnel (1909). “A Death in the Camp” was published in 1890, in the Civil and Military Gazette. It is set in London, where Kipling was living at the time. A well-known and successful architect has just died there at the age of seventy. Those who knew him describe his death as “shocking”, “ghastly”, “awful”.

”He died at the end of a completed work– his design finished, his prize awarded?’

‘Yes; but he didn’t live to….’
‘And his illness lasted seventeen days, of twenty-four hours each?’
‘Yes.’

‘And he was tended by his own kith and kin, dying with his head on his wife’s breast, his hand in his only son’s hand, without any thought of their possible poverty to vex him. Are these things so?’
‘Ye-es,’ said they. ‘Wasn’t it shocking?’

And then Kipling shows them what death really meant in India:

‘Shocking?’ I said. ‘Get out of this place. Go forth, run about and see what death really means. You have described such dying as a god might envy and a king might pay half his ransom to make certain of. Wait till you have seen men –strong men of thirty-five, with little children, die at two days’ notice, penniless and alone, and seen it not once, but twenty times; wait till you have seen the young girl die within a fortnight of the wedding; or the lover within three days of his marriage; or the mother– 60 little minutes– before her son can come to her side; wait till you hesitate before handling your daily newspaper of fear of reading of the death of some young man that you have dined with, drank with, shot with, lent money to and borrowed money from, and tested to the uttermost – till you dare not hope for the death of an old man, but, when you are strongest, count up the tale of your acquaintances and friends, wondering how many will be alive six months hence. Wait till you have heard men calling in the death hour on kin that cannot come; till you have dined with a man one night and seen him buried on the next. Then you can begin to whimper about loneliness and change and desolation.’ Here I foamed at the mouth.

[Heading] “Saint Praxed’s ever was the Church for peace” From “The Bishop orders his Tomb at St Praxed’s Church” by Robert Browning.

[Verse 1] down here in the Plains, in contrast to the Hills of line 4.

All that is left of “I” Perhaps a small play on words. Kipling, or someone like him, often seems to be the “I” who appears in and relates many of the stories and verses, although it is not often actually mentioned. [J.McG.]

Peg A drink of brandy or whisky and soda-water. Anglo-Indian. (OED)

Umballa (now Amballa): in the 1880’s the closest railway station to Simla.

Kalka the end of the flat road. To move a coffin there from Umballa will need a van “for four”, a “special brake” (l. 6) – a wagonette. 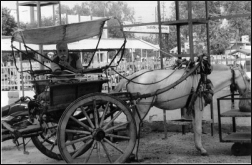 [Verse 4] After that From Kalka to Delhi the road was steep and narrow; the normal form of transport was a tonga, a small two-wheeled carriage, not strong enough for the weight of a coffin (l. 5-7). cf. the poem “As the Bell Clinks”, which is set on the drive up the mountain. In Definitive Verse a footnote defines a tonga as ‘the old-fashioned curricle that took men up to Simla before the railway was made’.

a bullock’s back the road is too narrow for a bullock cart.

the teak and leaden skin the corpse is sealed in a leaden casket inside a teak coffin.

[Verse 5] Padre a priest or chaplain.

the ashes and the dust a reference to the Anglican Burial Service. ‘We commit his body to the ground: earth to earth, ashes to ashes, dust to dust.’

[Verse 6] lines 2-3: a description of the summer weather in the Plains of India that the writer could not endure even as a corpse.