The Broken Link Handicap was published in the  Civil and Military Gazette on April 6th 1887, in the first Indian edition of  Plain Tales from the Hills in 1888, and in subsequent editions of that collection.

[Heading] While the snaffle holds or the long-neck stings A seven-line verse by Kipling collected as a Chapter Heading in Songs from Books, Inclusive Verse, Definitive Verse, and the Sussex Edition, Vol. XXXIV, pp. 216-7.

Snaffle a jointed bit, less severe than the curb.

long-neck a pattern of spur, worn on the rider’s boot-heel.

Big beam the weighing-machine for the riders, like a gigantic pair of scales usually with a seat at one end and a pan for the weights at the other.

‘ten-three’ Ten stone three pounds (64 kg.) the official weight to be carried by a four-year-old for a three-mile steeplechase.

G.R. a Gentleman Rider, an unpaid amateur, as opposed to a professional jockey.

[Page 163, line 1] to suit your book to the advantage of your betting-book.

[Page 163, line 4] all racing is rotten a large statement, which seems to have expressed a deep distaste by Kipling for the ‘something for nothing’ ethos and dishonesty commonly associated with horse-racing. He also points out that in the small world of the Anglo-Indians one cannot chase a friend and colleague for a gambling debt, and that if one does, one will be lucky to receive half the winnings. (Incidentally such debts were not recoverable at law.)

However, John Lockwood Kipling in Beast and Man in India {Macmillan 1892, page 188) notes that:

The Indian Turf has played a great part in the improved treatment of horses. One does not look for the nimbus of a saint over the head of the average racing man, but in India he is also a missionary, spreading no ignoble gospel. For it is impossible to get high speed and quality under the old conditions of starveling upbringing and crippling bondage.

[Page 164, line 5] Australian larrikin slang for a rough or hooligan.

[Page 164, line 6] chumars tanners and workers in leather – shoemakers [Hobson-Jobson] who probably also made saddles and were not allowed to live in the villages. The cow is a sacred animal to Hindus, and to work with leather is perceived as unclean.

‘It’s Oh to meet an Army man
Set up, and trimmed and taut
Who does not spout hashed libraries
Or think the next man’s thought,
And walks as if he owned himself,
And hogs his bristles short.’
( “In Partibus” in Abaft the Funnel)

[Page 164 line 7] ekka-pony An ekka was a rather uncomfortable cart-like conveyance (right), drawn by an undistinguished pony.

[Page 164, line 9] a kink in her flag Arab horses carry their tails in a curve a little higher than their backs – “a pony-tail.”

[Page 164, line 10] shroff a money-changer, a banker who lends money at interest. From the Arabic sarraf. Strictly speaking, he ought not to be a Moslem as usury is not permitted under Islamic law.

[Page 164, line 12] good hands one of the essentials of a horseman – the ability to keep the pressure on the bit just enough to control the horse and let him know you are there, but not hard enough to spoil his mouth.

The next few lines indicate that you must be an expert horseman with a large income and even then you will lose money.

[Page 164, line 15] shoeing-bills that is shoes for the horse – but it might include footwear for the rider as well !

[Page 164, line 17] b.w.g., 15. one and three-eighths a bay waler gelding, nearly 15½ hands high. Shackles is a reddish-brown, inclining to chestnut neutered horse, imported from Australia – usually New South Wales, but waler was applied to any horse from that part of the world – just over five feet (1.5 m.) at the shoulder. Of dreadful appearance, he has a will of his own and a nasty temper, which is hardly surprising, considering the way he has been treated.

[Page 164, line 21] no brand whether no owner’s mark or no particular breed is not clear.

[Page 164, line 22] Bucephalus Alexander the Great’s warhorse, a suitable name for a ship that carried horses.

[Page 164, lines 26, 27] Harpoon, The Gin two horses, the characteristics of which were perhaps known to Kipling and his readers

[Page 164, line 28] two miles he was best at a race of this distance; the rest of the page explains that all his rider had to do was to stay on him and make no attempt to control him in any way – if he did, he was thrown off.

[Page 165, line 10] weight the addition of extra weight (bars of lead in pockets in the saddlecloth) by the handicapper; if he does his job correctly, every race should be a dead heat ! This horse, however, was a winner every time so long as his jockey obeyed his instructions.

[Page 165, line 13 ] Chedputter not yet identified – information from readers will be welcome.

[Page 165, line 20] brick-mounds it is not clear precisely what this structure in the old brick-field is.

[Page 165, line 21] funnel-shaped hollow This obviously forms an acoustic chamber with the power of transmitting speech over a distance with the dreadful result seen below. Gilbert White reports a somewhat similar phenomenon at Selbourne where an echo returns from an oast-house 258 yards away from the speaker and repeats ten syllables quite distinctly. (The Natural History of Selbourne) by Gilbert Whyte, Letter XXXVIII, February 12 1778)

[Page 166, line 2] Stewards build jumps to suit their own stables in this context they are the officials who are supposed to see fair play on the racecourse, but fraudulently use their positions to their own advantage,

[Page 166, line 4] racking usually the gait of a horse at which the legs on the same sides move almost together; the meaning of this usage here is not clear.

[Page 166, line 7] Mrs Reiver She also appears in four tales in this volume, “The Rescue of Pluffles”, “Kidnapped”, “In Error”, and “Venus Annodomini”. She is also mentioned in “A Supplementary Chapter” in Abaft the Funnel.

The Maribyrnong Plate certainly exists on the Australian racing calendar. It was first run in 1871 and was named after the Maribyrnong River which flows beside Flemington racecourse. It now takes place on Oaks Day, which is the third day of the Victoria Racing Club’s spring (Melbourne Cup) carnival held at Flemington. However, it is a 1000 metre (5 furlong) race for two-year-olds, not a jumps race, and it has always had this format.

As to the horses named by Kipling, I have checked the “Turf Register” for 1886 and 1887. This book lists all thoroughbred horses racing in Australia for those years, and none of Kipling’s horses are listed. I think we can, therefore, conclude that apart from the name of the race, Kipling’s scenario is an invention. Accidents in jumps-races were then, and still are, a common occurrence and Kipling may just have drawn on events which any racing person would have been familiar.

However, as Melbourne is the location for the race, it is possible that he may have read or heard of the accident which took place during the running of the 1885 Caulfield Cup, held at Melbourne’s other major racecourse. In this race, which is the worst to have taken place in Australia’s racing history, 16 horses fell in a mass pile-up. One jockey was killed and a number of horses had to be put down or were permanently disabled.

[Page 166, line 16] jarrah a tough Western Australian timber that would have had to be shipped some two thousand miles to Melbourne to make these formidable fences.(Welcome, p.14)

[Page 167, lines 11 – 15] the horses’ names: Ousel from the water-bird of that name; Petard – perhaps as quick as a shot ? Gringalet is Sir Gawain’s horse – he was one of King Arthur’s Knights of the Round Table. Bobolink is named after an Australian water-bird.

[Page 167, line 15] Peshawar The spelling varies. Capital of Khyber Pakhtunkhwa in Pakistan (formerly known as the North-West Frontier Province of India), and administrative centre for the Federally Administered Tribal Areas of Pakistan. Situated in a large valley near the eastern end of the Khyber Pass, close to the Pakistan -Afghan border. See Hobson-Jobson p. 700. 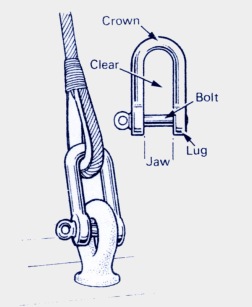 A shackle is a u-shaped steel link with a pin that unscrews, used for joining chains, attaching sheets to sails and many other purposes.

[Page 168, line 26] ‘Flying Dutchman’ ‘…That Phantom Ship, whose form,Shoots like a meteor through the storm…’ , as Scott writes of the spectral vessel of legend that is condemned to beat round Cape Horn (another version is the Cape of Good Hope) for ever. On the other hand it might be a particularly fast horse known to Kipling and his readers. Marryat’s The Phantom Ship (1839) and Wagner’s opera The Flying Dutchman are also based on the legend

This is Cyanosis – a bluish discolouration of the skin that occurs when there is not enough oxygen carried by the haemoglobin in the blood. It is first seen where the skin is thin e.g. lips and mucous membranes, and in extremities such as nail beds, fingers and ear lobes.
Brunt had a very bad fright. This caused constriction of the tiny blood vessels in his skin. This, in turn, slowed down blood flow through these vessels allowing more time for oxygen to be removed from the blood, hence leading to cyanosis and his blue lips. (G.S.)

[Page 170, line 6] Russia’s designs on India there were Russian scares in 1836, 1869 and 1885. The theme runs through Kipling’s Indian work, particularly Kim and “The Man Who Was” in Life’s Handicap. See also Something of Myself Chapter 3.

[Page 170, line 7] Currency Commission Perhaps considering Bimetallism which was much in the news at the time. This was a monetary system in which gold and silver were on precisely the same footing as regards mintage and legal tender. It was significant in India because the rupee was a silver coin.