The story of a day-long street-fight in Dublin between soldiers from rival units, a cavalry regiment and a regiment of Irish infantry, told by one of the Irish. Drink has been flowing, and age-old insults have passed between the two sides. It had been fun until someone drew a bayonet and killed a man.

This early barrack room ballad must have been based on reminiscences told to the young Kipling, perhaps by soldiers from the 18th, Royal Irish Regiment, stationed at Jutogh near Simla, while he was working as a journalist on the Civil and Military Gazette. (See “Kipling and the British Army in India” by Charles Carrington.). Regimental loyalties were powerful, memories of regimental history and tradition strong, and rivalry sometimes intense, despite the fact that soldiers from different units fought side-by-side in battle. In “The Drums of the Fore and Aft”, which tells of a shameful retreat by an inexperienced British regiment, Kipling writes (Wee Willie Winkie p. 327):

Two words breathed into the stables of a certain Cavalry Regiment will bring the men out into the streets with belts and mops and bad language; but a whisper of “Fore and Aft” will bring out this regiment with rifles.

Throughout the Nineteenth Century British Army units were stationed in Dublin, with many of the soldiers Irish by birth. Terence Mulvaney, in “Love o’ Women” (Many Inventions pp. 270/71) recalls using a belt in a fight years before:

‘I tould you, did I not, sorr, that I was caressed an’ pershuaded to lave the Tyrone on account av a throuble?’
‘Something to do with a belt and a man’s head wasn’t it?’ Terence had never given the tale in full.
‘It was. Faith, ivry time I go on prisoner’s gyard in coort I wondher fwhy I was not where the pris’ner is. But the man I struk tuk it in fair fight, an’ he had the good sinse not to die.

row a disturbance, noise or fight, in this context to rhyme with ‘thou.’

cavalree poetic form of ‘cavalry’, units mounted on horseback, lancers, hussars or dragoons. The cavalry were, by tradition, senior to the infantry, and traditionally thought well of themselves – not a view shared by the infantry.

Revelly Reveille, the bugle-call that is the soldier’s wake-up call in the morning.

forninst In front of, or near. Still used in rural Ireland today.

Buckle and tongue Parts of the belt that could inflict a dangerous blow.

They called us “Delhi Rebels”, an’ we answered “Threes about!” Insults referring to disgraceful events, long-remembered. Sir George MacMunn, who served in India, writes in KJ 94 (July 1950):

The Irish regiment was one of those battalions that came into the British
Line from the East India Company’s Europeans (after the Sepoy Rebellion of 1857), and were made Irish regiments as they had so many Irishmen in their ranks—
i.e. the Dublin Fusiliers, etc. The insult ‘Delhi Rebels’ refers to what was called “The White Mutiny” (of 1861). The Crown transferred the Company’s Europeans to the British Army — a perfectly legal matter according to the Crown lawyers—but the men thought otherwise and demanded an alternative return home or a bounty. Feelings ran very high and a vast underground movement was
going on unknown to their officers, on the part of about 10,000 men. It was
so serious, coming just after the mutiny of the Bengal army, that
severe measures had to be taken and one artilleryman was sentenced to
death. Eventually, the ill-advised action of the Crown resulted in their
releasing all the men, most of whom after a holiday at home re-enlisted to
return to India.

As for ‘Threes About!’ Sir George MacMunn explains that
these fatal words were:

… the mistaken or treacherous order to Pope’s cavalry brigade at Chillianwallah (1849) in the second Sikh war, namely :—”Threes about,” probably
mistaken for “Threes right,” but it involved the famous 14th Light
Dragoons (14th Huzzars) in a wild stampede (to the rear) with the merciless Sikh
swordsmen after them.

hornet A large wasp-like insect, brown with bright orange-yellow and brownish-black stripes. A hornets’ nest is not to be disturbed; they are highly aggressive, react violently to any threat, and can inflict dangerous stings

charge here meaning cavalry at the gallop against the enemy.

Passed the time o’ day Normally meaning a civil greeting. Here used ironically; they made rude remarks to each other. 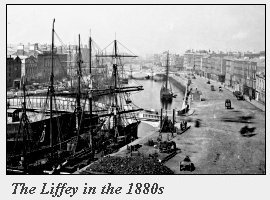 the Liffey is the river that flows through Dublin.
Some of the combatants had been thrown into the river.

put down the shine took the fun out of what had promised to be a good fight.

Clink a medieval prison on Bankside in London used until 1780 and thereafter slang for any prison.