Published 7th October 1887 in the Civil and Military Gazette.

Gunner Barnabas expatiates on the evils of the Temperance Movement in the army.
Barnabas also appears in the story “The Likes o’ Us”, and “The Last of the Stories”, both collected in Abaft the Funnel.

In Early Verse by Rudyard Kipling, 1879-1889: Unpublished, Uncollected & Rarely Collected Poems edited by Andrew Rutherford, there is a poem on the same subject as this story entitled “The Way av Ut” with Mulvaney as the main character. It was published on 8th October 1888 in the Pioneer and is concerned with the Black Mountain Expedition, which was carried through without any Field Canteens. The final stanza sums up the result:

Will they be long among the hills? My troth they will not so—
They’re crammin’ down their fightin’ now to have ut done and go;
For Bobbs the Tim’prance Shtrategist has whipped thim on the nail—
’Tis cruel on the Oirish but—ut’s Murther on the Kheyl!

[Page 432, line 29] Karachi then the most westerly port in India, now in Pakistan.

[Page 432, line 29] Bhamo a town on the Irrawaddi River, Burma, 200 miles upstream from Mandalay, and about 700 miles from the sea by the river. A very long way indeed from Karachi. 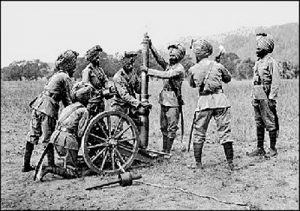 In his poem, “Screw-Guns”, Kipling includes the line ‘It’s only the pick of the Army that handles the dear little pets—’ and this was a fact. Since the two halves of the gun, weighing just over 200lb apiece, had each to be lifted from a cradle on the back of a mule at roughly shoulder height by three gunners. The height and physical strength requirements for mountain gunners were the highest in the army, the minimum height being six feet, which was two inches taller than the requirement for the Foot Guards.

Page 433, line 22] Commander-in-Chief’s house this indicates that this meeting was in Simla. Lord Roberts was the C-in-C at this time and his house was named “Snowdon”. See also page 435, line 16)

[Page 436, line 29] pack-drill punishment-drill in Full Marching Order. In the Field Service Pocket Book of the time, ‘Light Marching Order’ in the infantry in 1882 consisted of: Rifle and Haversack, Waistbelt with pouches and 70 rounds of ammunition plus bayonet frog, bayonet and scabbard, knife and waterbottle. All this weighed 25lb 7 oz. ‘Full Marching Order’ added another 18lb 8 oz of Greatcoat, Cape and Valise. [R.A.] 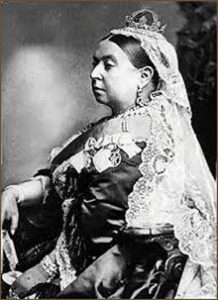 [Page 436, line 32] the Widow the Queen (Victoria). Her much-loved consort, Prince Albert, had died in 1861 at the early age of 42. The Queen was heart-broken, wore black thereafter, and lived for much of the time in seclusion. She lived on until 1901.

[Page 437, lines 26 & 27] rammin’ double charges home in all of the references to this practice that have been found, it is the projectile that is doubled up, not the propellant, and was particularly effective at close range. This could, for example, be a bag of grapeshot rammed into the gun on top of a cannonball, or two canisters of musket balls, or two bags of grapeshot.

[Page 438, line 2] Hutup kurcha! or Khachchar or Khachar, meaning mule. The ORG did not consider Hutup to be a real word, but no doubt the command was understood by the mule. The sense of the expression is something along the lines of “giddy up mule!”.