1st June 1888 in the Civil and Military Gazette.

As recounted here, the house-steward who keeps track of the household expenditure is a firm believer in the adage that if a report looks good, then it doesn’t matter if it contains a few errors. However, there is a serious note to this tale – to laugh at a man who is following the customs of his country and is proud of his achievements is to diminish him, and, as the poet John Donne pointed out in a different context, it diminishes the other participant(s) also.

Rather than explaining and converting each mention of money in this story, because there are so many, the following table can be referred to by the Reader. The source is the Hobson-Jobson entries under “Pice” and “Pie” which describe the Anglo-Indian values. To obtain further information on the complex history of the various monetary units, the Reader should also look up the entries for “Anna” and “Rupee”.
Definition under “Pice”

The pice is somewhat less than 3/2 of a farthing, making the rupee equivalent to about 24 old pence (two shillings, or 10 new pence).
Definition under “Pie”

The pie is about 1/2 of a farthing, making the rupee equivalent to about 24 old pence, the same value as found from the “pice” calculation.

[Heading] There are two headings—four lines of verse and five lines of prose. Both are from Alice in Wonderland, Chap.XII, “Alice’s Evidence” by Lewis Carroll (Charles L. Dodgson), 1832-1898.

[Page 388, line 32] Jeth the third month of the Sikh Nanakshahi calendar. Of 31 days, it runs from mid-May to Mid-June in the Gregorian calendar in general use today.

[Page 390, line 1] khas-khas for the tatties (alternatively khus-khus). A sweet-smelling grass for screens across doorways and windows known as “tatties”. The tatties are kept damp during times of hot winds which helps to cool the air. (Hobson-Jobson).

[Page 390, line 4] dog-cart a light open cart drawn by a pony with two cross-seats back-to-back, and space for a dog between or beneath. Kipling owned one of these vehicles. 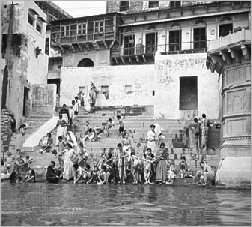 [Page 391, line 7] Horse hospital probably the Lahore Veterinary School which is less than a mile south of the wall of the City of Lahore.

[Page 391, line 21] Garibparwar! cherisher of the poor. [A Romanized Hindústání and English Dictionary by Nathaniel Brice, 1864].