[Page 295, line 1] Badalia more correctly Bedelia. Kipling’s spelling invites the pronunciation which would be used by his own Mulvaney, but it is a fair approximation of East End parlance.

As the song says As a guess, the song is fictitious, or at best a piece of after-dinner bawdy, like “Kafoozalum”. The song which runs

was current about 1903, ten years after this story was published. At about the same time there was a musical comedy called Bedelia. 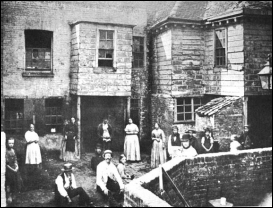 [Page 295, line 6] costermonger The archetypal Londoner in the markets of the East End, who sold fruit, fish, etc. from a barrow (a shallow two-wheeled push-cart) in the street. (Formerly costard-monger, a costard (archaic) being a large kind of apple.)

[Page 295, line 7] Gunnison Street cannot be identified with any known thoroughfare and there is no reason why it should be, for clearly the author would not wish it to be recognized.

[Page 295, line 8] flare-lamp a paraffin lamp much used on stalls and in fair-grounds at that time. Its oil was fed by gravity and it burnt with an unsteady flame.

[Page 295, line 9] winkle-barrow the periwinkle, an edible mollusc, is boiled and sold by the pint from the usual coster-monger’s barrow or from a stall. It is removed from its shell by the customer with an ‘winkle-picker’, an ordinary pin.

[Page 296, line 3] croup inflammation of the larynx and trachea in children. The resulting cough sounds even worse than whooping cough, which is a contagious disease in children, but the latter is more dangerous.

[Page 296, line 7] Barralong An African tribe of the Bechuana people.They settled Mafeking well before it figured in the South African war.

[Page 296, line 13] with a mangle a mangle was a necessary implement at that time for anyone who took in washing to earn a little money, as so many women in Badalia’s position did. A machine with two rollers was operated by a hand-crank and flywheel. The legend ‘Mangling done here’ which in those days was a common sight in the East End was an indication that mangling could be a separate trade from washing. Mangles were also used before ironing, and as wringers of wet articles.

[Page 296, line 14] sale of flowers a traditional occupation. East End women (known as ‘flower girls’) sold flowers in Piccadilly Circus in the West End of London—also near the Burlington Arcade (line 17). Shawl and bonnet (Bonnick—line 20) were the traditional garb of these ‘girls’, who were, some of them, grandmothers. Shaw’s Eliza Doolittle, some readers will know, sold her flowers in Covent Garden. Pygmalion opened at His Majesty’s Theatre in 1914.

[Page 296, line 22] Slop another of the many slang names for the policeman—others being ‘copper’, ‘peeler’, ‘filth’, ‘old bill’. It comes from reversing “police”—’Ecilop’—hence ‘slop’ in pronunciation. This construction is an example of London ‘backslang’.

[Page 297, line 7] shop pawnshop where money is lent on security of goods.

[Page 297, line 13] gardener here we again have Kipling’s curious pejorative use of this word; as if a gardener must be a bungler or at any rate an inefficient amateur. See ‘Quiet, you gardeners there’ in “Their Lawful Occasions” in Traffics and Discoveries.

[Page 297, line 27] sister Eva she was not a nun but a member of one of the many missionary and charitable societies organized in the 19th century to improve the lot of the poor, with an accompaniment of Christian exhortation. Many young women of prosperous families gave some of their time to this meritorious service. They wore a uniform, both for identification and protection in the dubious neighbourhoods they were expected to frequent. In course of time the Salvation Army, which began its social service in 1890, took over the functions of many of these organizations. Shaw’s Major Barbara is helpful in giving a picture of charitable work by the Salvation Army in poor districts of the time.

[Page 298, line 12] new brass bird church lecterns were often made in brass, with an eagle with outspread wings fashioned to support the book rest.

[Page 298, line 13] carbuncles most such eaglees would have had red glass eyes, but carbuncles are not rare or expensive, although they are classed as semi-precious.

The leech is an aquatic blood-sucking worm, and one of the larger kinds is called a ‘horseleech’. Because leeches were formerly used in medicine for bleeding patients, doctors were sometimes called ‘leeches’ by those who should have known better. The horse-leech’s ‘two daughters’ are said by Roger Marbeck in 1581 to be the tines of its forked tongue through which the blood is sucked. (Marbeck, 1536-1606, was chief physician to Queen Elizabeth I)

[Page 298, line 31] androgynous Of mixed gender (andros male and gyne female). Here, in contrast to “Ladies Committees,” groups not limited to one gender.

[Page 299, line 19] pauped Kipling’s invention. They can be pauperized no further than they are.

[Page 301, line 1] quartern a gill, or one-quarter of a pint or five fluid ounces (142 cl.). It was then a recognized measure for the purchase of spirits by retail, to take away. It is and was quite distinct from a ‘tot’, in which spirits are sold in pubs, which is less—about 5 cl.

[Page 301, line 3] Hennessey’s Rents not intended to be identified any more than ‘Gunnison Street’. The name ‘rents’ was usually given to large blocks of tenements, with meager facilities, let at low rentals. It could have been anywhere in East London, which is a large area, two miles from Gunnison Street (Page 307, line 21).

[Page 302, line 20] mulatter Mulatto, pejorative term for a person of both European and African ancestry (from mulo, mule).

[Page 302, line 32] diptheery diphtheria, an acute infections disease which inflames the mucous membrane of the throat and exudation forming a false membrane, producing fatal choking. Now under medical control by immunizing injection in infancy. See also “A Little Prep” in Stalky & Co., and “A Second-rate Woman” in Wee WillieWinkie.

[Page 302, line 32] fought with the beasts at Ephesus see Corinthians 15,32, which goes on: What advantageth it me, if the dead rise not…’ This is an important passage for Kipling; see “A Madonna of the Trenches” in Debits and Credits.

[Page 305, line 4] gas-lamps nearly all street lighting was by gas-lamp at that time, although there may have been some oil-lamps left. There were no electric lights in the streets.

[Page 305, line 4] Covent Garden wains vans and wagons brought fruit, flowers and vegetables from the country around London into this central market. The market has now moved out of the centre, and the fine buildings remain, housing shops, mostly for London’s visitors.

[Page 305, line 29] Providence the word was and still often is used alone, but the full phrase is: ‘The divine providence of God’, i.e., divine direction, control and guidance.

[Page 306, line 15] S’elp me Gawd ‘so help me God’. The phrase is sometimes further degraded into Swelp me Bob’. Originally it was the final sentence of the oath taken in a Court of Law by a witness.

[Page 307, line 8] Scrofulous scrofula is a tuberculous disease characterized by enlargement of the lymphatic glands. It is horrible to see. This is the mediaeval disease known as the ‘King’s Evil’ because it was thought curable by the King’s touch. A third name is Struma.

[Page 307, line 29] orders for maintenance a court maintenance order can be applied for by a woman deserted by her husband. In those days as occasionally in these, it was, if granted, most difficult to enforce in the sort of circumstances described in this story.

[Page 308, line 15] cold there is a doubt about this. It might mean neat, but it was customary in those days to take whisky with hot water, lemon and sugar, freely provided in the pubs. It was called ‘toddy’, and still is.

[Page 310, line 16] O women this phrase is more likely to come from an Indian woman. It is perhaps another sign of Kipling’s haste at this time in his career.

[Page 322, line 1] The kennel The surface drain of a street; the gutter. From middle English “cannel”.

England the Church of England.

[Page 323, line 23] picking at the counterpane a recognized symptom of imminent death. Cf. the death of Falstaff, Henry V, II: ‘. . . for after I saw him fumble with the sheets and smile upon his fingers’ ends, I knew that there was but one way’. 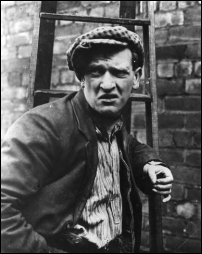 [Page 324, lines 4-23] “Hadn’t we better send for Sister Eva?” While it seems clear that Brother Victor is attracted by Sister Eva, ORG objects that it would be against the rule of his order, though it also suggests that: ‘this part of the story is carelessly dealt with’.

The Victor-Sister Eva connection seems like a gratuitous additional subplot, but it does appear that Badalia, in love with Hanna, advises Eva and Hanna to marry, which they do.