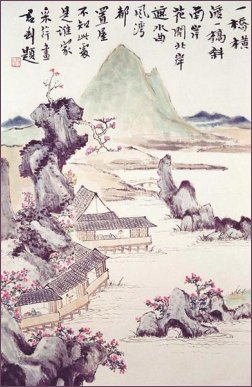 After
“Early Chinese” Chinese poetry, traditionally the most highly regarded literary genre in China, can be divided into shi, ci and qu. There is also arter a kind of prose-poem called fu.

In later years some verse in Western style has appeared.

See Li Po and Tu Fu (Poems Selected and Translated with an Introduction and Notes by Arthur Cooper; Penguin, 1973, p. 31.)

The poet describes a slippery road with the death of a motorist, and recalls his own tragic accidents.

This evocation of a series of hit-and-run accidents is a small masterpiece and seriously challenges the common assumption that Kipling never read his younger, more experimental contemporaries. Both the style and the use of free verse suggest that he must have known Ezra Pound’s Cathay (1915) and Lustra (1916) or Arthur Waley’s A Hundred and Seventy Chinese Poems (1918) or perhaps both. Kipling brilliantly hits off the compressions and inversions, the somewhat mannered phrasing and cadence—the sheer Chinoiserie—of Pound’s and Waley’s translations in lines like ‘Dead leaves under foot reproach not’ and ‘How black a shadow!’.

Notice, too, the quietly aestheticising pun in the title, “Arterial”, hinting at the artiness of Chinese poetry, a point immediately exemplified by the exquisite delicacy of describing a road covered with black ice as “the ebony-lacquered avenue”.

Janet Montefiore (p. 121) writing of Kipling’s pastiches and parodies refers to W.S. Gilbert’s “Bab Ballads” (largely the verses from Gilbert and Sullivan’s Savoy Operas) and other comic verse, which show some brutality. She continues:

The jokes in “The Muse Among the Motors” follow suit, often turning on fatal car crashes—as in the two exquisite poems entitled “Arterial”… This is an extraordinarily accomplished pastiche—presumably of Arthur Waley’s translation of early Chinese poetry, perhaps also of tne Pound of Cathay. [Ezra Pound’s great series of poems “Cathay and the Way Thither” (1915): Eds.] If one didn’t know the author, these poems would look like Imagist epiphanies turning on the distinction between the timeless pastoral of Chinese poetry and the modernity of the motor-car.