This poem, listed in ORG as No 660, was first published in McClure’s Magazine as a heading to the story “Quiquern” in November 1895, and in The Second Jungle Book in the same month.

The poem describes the return of Inuit hunters from the edge of the ice-sheet, bringing the seals on which their lives depend, for meat, for blubber, and for fur.

In “Quiquern”, the linked story, a little tribe of Inuit is near starvation. The food is running out and the dogs are going mad. A boy and a young woman set out in the snow to hunt. Following two of the dogs, which have run away in the darkness, they reach the edge of the ice, find and kill seals, and bring them home to their village so all can eat.

For life and death in the Northern seas see also “The White Seal” (1893), and “The Rhyme of the Three Sealers” (1893).
Brian Mattinson lists two musical settins of this powm, by Gordon Dixon and Leslie Fish.

Angutivaun Taina Presumably Inuit words. We are seeking a translation. The Inuit (or Eskimos) are the ancient peoples of the North Polar Region. ‘Inuit’ simply means ‘the people’. See “Quiquern” for an account of their lives in Kipling’s day, based on publications of the Smithsonian Institution in Washington, which he visited in March 1895. 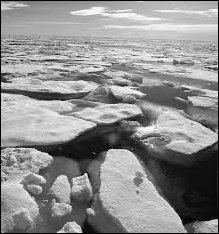 back from the edge of the floe in Winter in the polar regions the sea freezes, so that beyond the land there is a sheet of ice stretching out for miles towards the open water.

In Spring this breaks up into floes, smaller sheets and blocks of ice. The seals need to hunt for fish in the open sea, and the Inuit people hunt them to the edge of the ice sheet, which Kipling refers to here as ‘the floe’.

Au Jana! Aua ! Oha ! Haq! Cries of encouragement to the dogs that haul the sleighs. Kipling may have been told of them or read of them, or made them up. We have been unable to find a translation, and contributions from readers will be much appreciated.

lance in this context a type of spear.