There is a version of this poem in the Library of Congress, handwritten and signed ‘Rudyard Kipling’, with a note:

‘Written out for ‘Bobby’ Pringle. Originally appeared in the I.P.G. about 1886–7–8—I’ve forgotten the exact date.‘

Rutherford notes that the paper has a watermark of 1895, which suggests that it was written out at least seven years after publication in the Indian Planter’s Gazette. The poem was never published by Kipling, but is to be found in Rutherford (p. 353) and Pinney (p. 1924) as well as on this site.

The poem tells the story of a wily horse-trader in Lahore who drugs the horses he sells to army officers, leaving them with useless mounts. Then a fresh-faced but equally wily young subaltern gets his revenge by doing likewise, and selling him a huge wild ungovernable gelding, a kicker and a man-killer, by calming it with drugs in its feed. The subaltern, who likes to bet on horses, is later said to have friendly relations with Ahmed Shah, using little black pills from time to time.

Bobby Pringle a sporting vet whom Kipling had known in Lahore.

Sudder Bazar The chief market in Lahore. See the poem “The Sudder Bazar”.

Morar A garrison town about 300km south of Delhi.

roarers horses suffering from noisy breathing caused by narrowing of the windpipe.

Little Black Pill opium to sedate a horse and disguise its faults.

trichi ‘Trichinopoly’ cigar. A cheap and crudely made cheroot made from tobacco grown near Tiruchirappalli in Tamil Nadu. They were one of India’s main items of export in Victorian times.

caster a horse no longer fit for service (in this case in the Artillery), and sold off by public auction. See also “The Rout of the White Hussars” (Plain Tales from the Hills, 1888), in which the much-loved Drum-Horse of the regiment is cast on the instructions of the Colonel, with dire and hilarious consequences.

the Tenth Commandment The last of the commandments of God brought down from the Mount Sinai by Moses, as recounted in chapter 20 of the Book of Exodus in the Old Testament:

sixteen hand a ‘hand’, used to measure a horse’s height, was four inches, so this horse was 5 ft 4 inches tall at the shoulder (1.6 metres), a big beast.

Sahib kitna mangta? How much does the Sahib want?

Teen three Three hundred rupees, worth some £23 then, some £2300 at today’s values. When Kipling joined the Pioneer he was paid 600 rupees a month. 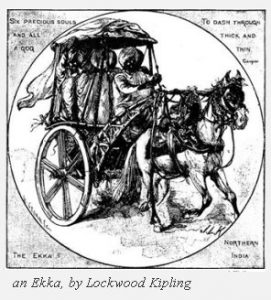 I plunge to my last clean shirt on their stable I bet as much as I can afford on their horses, when I know they will win.