This article is listed in ORG as ‘Uncollected No 230’ and annotated at p. 2546. It was first published in The Times on March 15th 1900. It also appeared in Harper’s Weekly on March 17th, and in The Friend, Bloemfontein, on April 10th. It was included in War’s Brighter Side edited by Julian Ralph and published in London and New York in 1901.

Britain had been at war with the Boer Republics of the Transvaal and Orange Free State since October 1899. The British had expected the Boers to be defeated by Christmas, but they had proved much more formidable adversaries, inflicting some grim early defeats, besieging towns, and conducting damaging guerilla warfare.

The article is a diatribe against what Kipling saw as the disloyalty of citizens of Cape Colony of Dutch descent, in secret sympathy for the Boers, in passing intelligence to them, and sometimes shooting at British patrols. This enraged Kipling, who believed that the government should be taking a much harsher line against them. He had been delighted to meet on his hospital visits wounded soldiers from other imperial dominions like Australia and Canada fighting in Britain’s war. He contrasts their loyalty to the imperial family with the divided loyalties to be seen in Cape Colony. He wanted to see more men of their stamp settling in South Africa, and had little regard for the Boers.

As Sarah LeFanu points out, the article did not receive a particularly warm response back home in England

The belligerent tone shocked some of his readers, while the convoluted allegorising alienated others. British anti-war magazines were unimpressed. Punch offered to explain the ‘double Dutch’ that obscured Kipling’s meaning

Kipling did not subsquently include the article in his various collections.

Kipling had been enthusiatic about the war, had helped raise large sums of money for the families of serving soldiers, and arrived in Cape Town in the first week of February 1900. He was closely in touch with Alfred Milner, the British High Commissioner, who had been instrumental, with the Colonial Secretary Joseph Chamberlain, in precipitating the war. Kipling was also very friendly with Cecil Rhodes, the millionaire businessman and active empire-builder, and with Field-Marshall Roberts, the Commander–in–Chief.

Ostensibly the cause of the war was the need for the British to protect the interests of British subjects in the Transvaal, the ‘Uitlanders’, who had flocked there in search of riches from the gold mines of the Rand, and had been denied the franchise by the Transvaal Government. In fact the issue was more crude, the determination of the British to assert their hegemony in Southern Africa over the Boer Republics.

The Boers wanted to be left alone to run their republics in their own way. They had trekked North and East from the Cape from the 1830s onwards in search of independence from British rule. They had fought the British successfully in 1889/81 and negotisted full self-government under formal British Suzerainty.

Now, over the issue of the Uitlanders, their leader, Paul Kruger, had negotiated in good faith and offered concessions. However Alfred Milner, who was determined on a war of domination, and who despised the Boers and their leaders, made compromise impossible. He persuaded the Government in London that war was necessary and desirable, despite doubts within the Cabinet, and the hostility of the Liberal opposition. 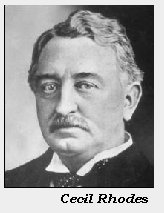 It is not easy, at over a hundred years’ distance, to appreciate the strength of the British sense of their right to rule, and to extend their Empire. Cecil Rhodes, who was one of the most powerful figures in Southern Africa, and had been Prime Minister of Cape Colony for five years in the early 1890s, had expressed the view (quoted by David Gilmour at p.136) when a young man of twenty-four, that Britain’s duty was to

‘…seize every opportunity of acquiring more territory ‘ because ‘we are the finest race in the world, and … the more of the world we inhabit, the better it is for the human race’.

Kipling, who greatly admired Rhodes, would probably have endorsed this statement, though not—perhaps—in such crude terms. It was not a view that commended itself to the Afrikaners, who were a tough pioneer people, ready to fight for their land and their independence.

(from the ORG notes by P. W. Brock and Roger Lancelyn Green)

The Sin of Witchcraft This is taken from 1 Samuel 15,23 in the Old Testament

Rebellion is as the sin of witchcraft, and stubbornness is as inquity and idolatry.

dysa or disa, an orchid found on Table Mountain.

karroo A Hottentot word for the plateaus of South Africa, parched and bare during long dry spells.

Kimberley The diamond-mining town that made the fortune of Cecil Rhodes, and no doubt paid for the “cars of state” . Situated in Griqualand West, just inside Cape Colony on the railway running north to Rhodesia.

Mafeking 275 miles north of Kimberley, also on the railway and close to the Transvaal.

Gaberones A small railway town, still farther north, in an area subjected to diversionary Boer raids early in the war.

De Aar A railway junction, some 400 miles North-East of Cape Town, important because it had rail communication with all the Cape Colony ports.

an enemy’s country In Cape Colony citizens of British stock were outnumbered by the Dutch. The Boer republics prepared arms for 40,000 recruits expected to join them from the Cape.

as it was in 1881, the government will take care it does not pay anyone to be loyal … Colley at Majuba The 1st Boer War of 1880-81 was a revolt by the Transvaal against its recent annexation by the British. On 27th February, 1881, Major­ General Sir George Colley, holding Majuba Hill in north Natal with 600 British troops, allowed himself to be surprised by a small party of Boers who worked their way up under cover of fire from another quarter and killed him at pointblank range, trying to rally his men. The fugitives afforded easy targets to expert Boer marksmen.

The British Liberal government, who in May 1880 had proclaimed to both Briton and Boer that “under no’ circumstances can the Queen’s authority in the Transvaal be relinquished”, abandoned, in effect. all but a dim shadow of that claim. The captured burgher in “The Comprehension of Private Copper” was the son of a man who had trusted the British government, and paid for it.

P. & O.’s Liners of the Peninsular and Oriental Steam Navigation Company. Familiar to Kipling from the run out to India, and still active in the 21st century.

South Arm A jetty, now part of the Harbour works.

Salt River Junction A small station in Cape Town where the branch line running south to Simon’s Town joins the main line for the north and eastern parts of the Colony.

Rimington Major M. F. Rimington of the 6th Dragoons, sent out before the war to train scouts in Natal, was one of the younger officers who made their name by meeting the mobile Boer commandos on their own level. He retired as a major-general with a knighthood.

jayhawkers In the U.S.A., freebooting guerillas, especially in Kansas during the Civil War, 1861-65.

Colesberg A railway town in Cape Colony on the Central Railway to Pretoria, a little south of the Orange Free State. It was used by Geral French as a base for the relief of Kimberley.

Free Staters Burghers of the Orange Free State, the neighbouring Boer Republic, whose capital was Bloemfontein, as compared with Dutch citizens of Cape Colony, with voting rights, and obligations.

registered voters Of Cape Colony, and thus British citizens, whatever their private sympathies.

Stellenbosch A town thirty miles east of Cape Town, in 1900 was both a centre of the highly militant Dutch Reformed Church and a rear supply base for the British army.

Kruger and Steyn The Presidents of the Transvaal and the Orange Free State republics, respectively.

Gilbert and Sullivan operetta Probably a reference to the political topsy-turvydom in The Gondoliers or Iolanthe.

turn Queen’s evidence Save themselves by incriminating their comrades.

thrown her cap orer the windmilJ to act recklessly, or in defiance of convention.

Edmonton is in Alberta, Canada. Invercargill is in the South Island of New Zealand. Perth is in Western Australia. Halifax is in Nova Scotia, Canada.

South Afriean News… Cape Times The Cape Times was seen as the leading Cape Town newspaper for an English reader. The South African News was more focussed on domestic news.

little newspapers with the patent insides Papers whose original content is limited to local paragraphs on the front or outer pages, the inner matter being supplied wholesale by a press bureau or news syndicate.

Winnipeg and Quebec are both in Canada. Canterbury and Wellingtonare in New Zealand. Brisbane is in Queensland, Australia.

punchayet Or panchayet, is a village council in India, guiding affairs more by the weight of its collective opinion than by legal sanctions.

Cretans … a hasty hexameter of old days Epimenides on the Cretans, quoted in St. Paul’s Epistle to Titus, I, 12:

Laodiceans have “passed into literature” The Christians of Laodicea in Phrygia (one of “the seven Churches which are in Asia”), near Denezli in modern Turkey, according to St. John (Revelation III , 14-16) were “neither hot nor cold”.