[Page 127, lines 1- 8] Verse heading Eight lines beginning ‘Oh! Hush thee my baby …’ with “Seal Lullaby” below but included in Songs from Books simply as a Chapter Heading. Kipling may have had in mind Sir Walter Scott’s “Lullaby for an Infant Chief”, beginning “Hush thee my babie, thy sire was a Knight…”

[Page 127, line 11] Novastoshnah Kipling: ‘I don’t know how it should be pronounced. It is a Russian name’.

[Page 127, line 12] St. Paul one of the Pribilof Islands named after Gerasin Pribilof who visited them in 1786, north of the Aleutian Islands which stretch from the western end of the Alaska peninsula in a curve for almost 1,000 miles towards Kamchatha in far-east Asia. St. Paul was originally named St. Peter and St. Paul, because Pribilof’s second-in-command landed there on that feast day. Fur seals were hunted almost to extinction in the nineteenth century, with nearly half the world’s supply coming from St. Paul Island in about 1900.

[Page 127, line 13] Limmershin is the Aleut name for the Alaskan winter wren, native to the United States and remarkable for its resonant song. It signifies a chew of tobacco, which fits the bird’s small size and dull brown and black plumage (R.M. Patterson, Blackwood’s Magazine, September 1957). See “Preface” to The Jungle Book, p.vi, l.20 for an “acknowledgement.” Described as ‘very quaint’ rather than ‘very odd’ in the First English Edition of The Jungle Book.

[Page 128, line 8] Sea Catch ‘Sea Catchee’ is the Russian name for a full-grown male seal. This is the Northern or Alaska fur seal (Callorhinus ursiness) a member of the eared seal family (Otaricidae). Fur seals breed in large numbers on the Pribilof Islands (U.S.) and the Commander Islands (Komandorskiye Ostrova, Russia) in the Bering Sea and range over the North Pacific Ocean from southern Japan to southern California in their annual migrations. The typical adult male, or ‘bull’, weights 400-600 lb (180-270 kg) compared to the female’s 90 lb (40kg).

[Page 128, line 14] almost a mane The fur is blackish or dark brown, with longer hairs at the back of the neck, forming the so-called ‘wig’ or ‘mane’.

[Page 129, line 5] Hutchinson’s Hill The following quotation from Elliott describes the geography of this and other locations on St. Paul named later in the story when the seals are killed: 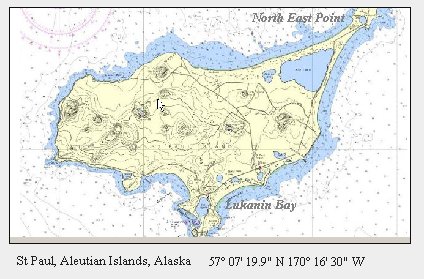 St. Paul was shaped like a swimming reptile; the small head set on a long neck formed the N.E. Point, across the head was Novastoshna and elsewhere on the N.E. Point were Hutchinson’s Hill and Webster’s House, the Salt House and Sea Lions Neck. Some twelve miles away to the south-east a southern promontory reached out, forming the paddling flipper of the reptile, and there, facing the rising sun, were the beaches of Lukannon.

[Page 129, line 21] holluschickie (from the Russian) Young male seals which haul out to rest and sleep on beaches adjacent to, but apart from, the breeding grounds.

[Page 129, line 25] Matkah Kipling: ‘pronounced Mat-ker (accent on Mut), means a mother seal.’ The adult female bears her first young when three or more years old. The first males to reach the islands in early May, the so-called ‘beachmasters’, establish territories which they defend aggressively for an average of 50 days. As many as 100 females eventually collect within each of these territories after their arrival in June. Within 2 days of arrival the females give birth to a single pup, then mate again within the next week. Females nurse their pups for 3 to 4 months, making several week long trips to feed during this period. The breeding males, having fasted since their arrival, leave the beaches in August to regain their lost body weight.

Kipling was evidently ignorant or ignored the true facts of breeding in seals, and – as with the wolves in the Mowgli stories – implied small, human-like families where individuals recognised their parents after reaching maturity (page 129, line 6).

[Page 130, line 16] Killer Whale now more generally known as ‘Orca’ after its specific name Orcimus Orca, is the largest of the dolphin family. It was originally called “Whale Killer” by sailors who witnessed it attacking even the larger baleen whales. Orcas are the top predators in the ocean, eating a wide variety of fish, marine birds and other species of marine mammals, particularly seals, fur seals and sea lions.

[Page 130, line 23] Otter Island not identified, probably a small island in the Pribilof group. The otter referred to would be the sea otter Erhydra lutris.

[Page 132, line 1-10] You mustn’t swim … a four and a five line verse, included as a Chapter Heading, which, strictly speaking it was not, in Songs from Books: ‘A wave carried him out beyond his depth, and his big head sank and his little hind flippers flew up exactly as his mother had told him in the song.’ (p, 133 lines 13-15).

[Page 134, line 20] King of the Castle apparently played over the ages by children everywhere there is a suitable small eminence.

[Page 135, line 8] flippers tucked down Said to be an error: according to an interview by a Roger Peacock in Lloyds’s Newspaper, 4 January 1903: ‘A fur seal sleeps with his fore flippers folded on his breast, not limp at his sides.’ On hearing this Kipling grunted: ‘Confound you.’ See KJ 58, July 1941, p. 24.

[Page 135, line 18] Sea Pig, the Porpoise “Sea Pig” only in the First English Edition, where the reader was to gather that porpoises were meant from the next sentence. The name is often applied to all cetaceans but is properly restricted to the true porpoises (family Phocoenidea), two species of which occur in the North Pacific and the Bering Sea: the ‘Harbour Porpoise’ Phocoes phocoena and ‘Dahl’s Porpoise’ Phocoena dalhi.

[Page 136, line 11] Albatross The Short Tailed Albatross, Diomedea Albatrus was formerly abundant in the North Pacific but its present population is estimated to be in the low hundreds.

[Page 136, line 11] Man-of-war-Hawk a name sometimes used by sailors for the ‘Frigate Bird’ Fregata magnificens and several other species. They are not hawks, but close relatives of the pelicans.

[Page 142, line 1] sea-lions are the larger members of the eared seals, the largest (Otaria stelleri) from the North Pacific and Bering Sea reaching 13 ft. (4 metres) in length.

[Page 142, line 29] Sea-Vitch Sivitch is Russian for the walrus (Odolaenus rosmarrus), a large mammal related to the seals, characterized by large tusks in both sexes.

[Page 144, lines 10-12] Chickies … Puffins ‘Chickies’ are Burgomaster Gulls, ‘Gooverooskies’ are Kittiwakes, and ‘Epatkas’ are Puffins. The Burgomaster is the glaucus gull Larus hyperboreus.

[Page 144, line 22] Sea Cow a term loosely used for any of the mammalian order Sirenia, which comprises the living manatees and dugongs but is properly restricted to the extinct ‘Steller’s Sea Cow’ Hydrodamalis gigas. The body ended in a horizontal tail fluke as in the dolphins, the broad muzzle was split and the transversely expanded lips were very mobile. The sea cow measured up to 26ft in length and weighed up to 11 tons. They were exterminated less than thirty years after their discovery, accounting for ‘If he is living still’. See pp.149-150.

[Page 146, line 4] Basking Shark (Cetorhinus maximus) takes its name from its habit of basking on the surface. It reaches a length of 40 ft, but is quite harmless, feeding on minute planktonic organisms, and is therefore not a threat to seals.

[Page 146, line 5] Hammerhead This shark (genus splyrna) is peculiar in having the front part of the head extended outward on each side, with the eyes at the ends of these extensions.

[Page 146, line 8] scallops shellfish which can swim by opening and closing the two halves of its ridged shell. It has a foot for burrowing and a tuft of adhesive threads by which it can anchor itself. The ‘hundreds of years’ is probably not meant to imply individual longevity, but the longevity of a group in one place. The Alaskan Weathervane Scallop may be the oldest lived of all at 28 years.

[Page 147, line 4] Gallapagos Usually spelled Galapagos, and changed to that in the Sussex Edition. They are islands in the Pacific Ocean, 0°30’ S 91° 0’ W, best known for the visit by Charles Darwin, whose observations of birds and animals there in HMS Beagle led to his theory of evolution, “The Origin of Species”.

[Page 147, line 6] Georgia Islands South Georgia and the smaller Bird Island to the west, now with its former fur seal population nearly restored, are in the South Atlantic, 54°30’ S 36°0’ W.

[Page 147, line 7] Emerald Island A mystery. Discovered south of Macquarie Island in the Southern Ocean by Captain Nockell in 1821, and named after his vessel The Emerald. In 1890 a Port Chalmers sea captain reported that he had once seen Emerald Island, and tried to make a landing on it. He depicted it as a small island, very rugged and rocky, with no safe place to make a landing. Since than the Antarctic explorers Amundsen, Scott, Shackleton, and Wilkes, have attempted but failed to find it, and HMNZS Pukali could not locate it in 1949. If it ever existed, could seismic activity have caused it to disappear ?

[Page 147, line 7] Little Nightingale Island Nightingale, one of the Tristan da Cunha group in the South Atlantic, 37°26’ S 12°29’ W. The author probably intended to write ‘little’, and this error persisted into the Sussex Edition.

[Page 147, line 29] Masafuera Mas-a-Fuera Island, one of the Juan Fernandez group (see the note above on page 136, line 25), in the Pacific Ocean, 32°20’ S 80°40’ W. Renamed Isla Alejandro Selkirk by the Chilean goverment in 1966, to commemorate the time spent on the island by Alexander Selkirk, the original of the castaway in Daniel Defoe’s novel Robinson Crusoe.

[Page 149, line 11] Great Combers of Magellan curling waves, breaking at the top, encountered by seamen rounding Cape Horn. The Strait of Magellan lies between the southernmost mainland of South America, and the island of Tierra del Fuego; it was named after the explorer Ferdinand Magellan (1520).

[Page 149, line 27] Frog-Footmen from Alice’s Adventures in Wonderland by Lewis Carroll (Charles Dodgson), chapter VI. He and a Fish-Footman bow to each other until their wigs are entangled.

[Page 150, line 2] bushel of seaweed The ‘Sea-Cows’ were herbivorous. The bushel was a measure of volume (8 gallons, or 36 litres) used in Britain within living memory for measuring grain, fruit etc.

[Page 152, line 8] ‘My Wig !’ A male seal has a substantial ‘mane’ or ‘wig’. But the cockney Mr Jorrocks, in the novels of Robert Surtees, well known to Kipling, was in the habit of exclaiming ‘Dash my Wig !’ despite the fact that he lived long after wigs went out of fashion in England.

[Pages 158-159] “Lukannon” Six four-line verses with three lines of explanation above. In the First English Edition of The Jungle Book the explanation was only:

This is a sort of sad seal national Anthem’

It is collected in Songs from Books as “Song of the Breeding Seal. Aleutian Islands”. The island in the story was actually one of the Pribilof Islands.