[Page 1, initial] The drawing is signed “R.K.” between the screws that join hilt and blade. On the blade is inscribed “Holfen Tromsoe 1847.” Other Nordic references in the book are the runic characters in the illustration to “How the first Letter was Written,” and the initial to “The Cat that Walked by Himself.” Cf. also the initial to “The Sing-Song of Old Man Kangaroo.”

[Page 1, line 4] garfish A fish recognised by its long, slender and silvery body, and by its jaws being produced into a long, pointed, bony and sharply-toothed beak. It belongs to the genus Belone. The name possibly comes from gar in Old English, meaning spear.

[Page 1, line 7] pickereel The pickerel is a young pike.

[Page 1, line 18] Cetacean The Cetaceae are an order of mammals, to which the whales belong.

a whale, who submerged just in time to clear us, and looked up into my face with an unforgettable little eye the size of a bullock’s … When I was illustrating Just So Stories, I remembered and strove after that eye.

[Page 2, line 9] jaws-of-a-gaff On a gaff-rigged sailing ship, the upper edge of the quadrilateral mainsail is attached to a spar, the gaff. Its jaws are a fitting at the forward end; this fastens round the mast, allowing the other end to swing free as the sail is adjusted to catch the wind.

[Page 5, lines 4-5] latitude Fifty North, longitude Forty West Roughly 550 miles east-north-east of St John’s, Newfoundland, a deep-water area between the Grand Banks (scene of Kipling’s Captains Courageous) and the Mid-Atlantic Ridge. In the St Nicholas Magazine version the bearing is “41.42 and 26.36,” without specifying “north” and “west,” the last figure being “37” a few lines further on. According to ORG: “this would have placed it in mid-Atlantic, somewhere to the north-west of the Azores, where whales are very infrequently found.”

[Page 5, lines 11-2] infinite-resource-and-sagacity The epithet suggests a deliberate echo of Homer and Odysseus, that other resourceful mariner, hero of the Odyssey.

[Page 6, line 13] Hammer-headed Sharks The shark of the genus Sphyrna, which is peculiar in having the front part of the head produced outwards on both sides, with the eyes at the end of these extensions. 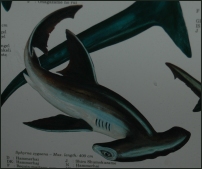 The common hammer-head shark (U.S. zygoena), which attains a length of 16 feet, occurs on the milder coasts of Europe and ranges along American shores as far north as Massachusetts and California.

[Page 6, line 10] shadow-pictures These and their surrounding patterns suggest the carvings of the South Pacific Islands.

[Page 9, line 11] he stepped and he lepped Three phrases, including this one, were added in the book version. In the Munchausen story, (ch. viii), the Baron is swallowed by a large fish:

I played my pranks, such as tumbling, hop, step and jump, etc., but nothing seemed to disturb him so much as the quick motion of my feet in dancing the hornpipe …

[Page 9, line 24] natal-shore Homer’s Odysseus also longs for his island home. The “white-cliffs-of-Albion” usually refer to the chalk cliffs at Dover, on the south-east corner of England.

[Page 10, lines 4-6] ‘Change here … Fitchburg Road’ Railway stations in New Hampshire and Massachusetts in Kipling’s time. He and his daughter Josephine may have heard them in a station announcement at Beaver Falls or South Vernon, junctions respectively north and south of Brattleboro. From Beaver Falls the Fitchburg Railroad ran south-east via Keene to Boston, connecting at Ayer with a line to Nashua. At South Vernon the Central Vermont met the New London and Ashuelot Railroads; the latter ran north-east via Ashuelot and Winchester to Keene.

[Page 10, line 16] there it stuck! In Munchausen, ch. xvii, a whale has swallowed several ships. When it opens its mouth, the Baron frees their crews by propping up two masts to prevent its jaws closing.

[Page 10, line 17] Sloka A verse couplet consisting of two lines of sixteen syllables each, or of four octosyllabic half-lines. It is the chief verse form of the Sanskrit epics.