First published in the catalogue of the tenth summer exhibition at the New Gallery, London in April 1897. It accompanied a painting by Kipling’s cousin Philip Burne-Jones. The verses were also published in the Daily Mail on April 17th 1897, and in the New York Tribune on May 9th. 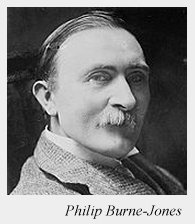 Philip was the son of Edward Burne-Jones, the distinguished pre-Raphaelite painter, and Kipling’s much loved ‘Uncle Ned’. The New Gallery had been the setting for a major Edward Burne-Jones retrospective in 1892–93.

Rudyard was clearly seeking to help his cousin with this contribution. But one also wonders if there is an echo here of Rudyard’s long unhappy passion for Flo Garrard, for whom he wrote many poems, and of his ultimate rejection.