The story was first published in The Windsor Magazine and McClure’s Magazine in January 1899, and subsequently collected in Stalky & Co. (1899). It was later included in The Complete Stalky & Co. (1929).

King, housemaster of the neighbouring House, sees Stalky & Co. on their way to bathe, and sarcastically asks why Beetle has a sudden zeal for cleanliness. Before long the word has spread around that the boys of their house, Prout’s, don’t wash. 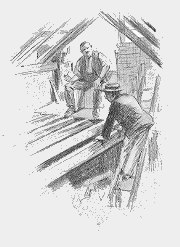 Beetle, inspired by a visit to some building workmen, suggests that the Three push something smelly in between the floor and ceiling of one of King’s dormitories.

Meanwhile Stalky and Turkey, hunting in the ‘Burrows’ with a saloon pistol, happen to have slain a cat and the three push the corpse under the dormitory floor. Before long the smell of decay permeates King’s House, and the rest of the school are beseeching them to wash. Revenge is sweet.