At a time of high political tension over the future of Ireland, the poem passionately urges the cause of the Protestants of Ulster, who —if Ireland were to be given Home Rule—were violently determined to remain under the British Crown.

Ireland had been conquered by the English in the Middle Ages, and had a long turbulent history of revolt, repression, and conflicts over land. The majority of the people were Catholics, but were not allowed until 1829 to practise their religion, or—for a long period before—to use their native language. 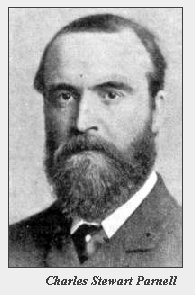 Irish MPs sat in Parliament in London, and the country was governed as part of the United Kingdom. In the last quarter of the 19th century there had been a number of campaigns, some of them violent, against British rule and English landlords, notably by the Fenians. The Irish political leaders at Westminster, under Charles Parnell, campaigned ceaselessly for Home Rule.

The future of Ireland was a major issue in British politics during this time, and the Liberals, under Gladstone, had brought in two Irish Home Rule Bills, in 1886 and 1893, which failed to get through Parliament.

In 1867 Canada had received ‘Dominion Status’, in effect Home Rule within the Empire, but Ireland presented some special problems, not least the presence of the substantial community of Protestants in the north-eastern counties of Ulster, who preferred British rule to the prospect of being subject to the Catholic majority in the country as a whole. 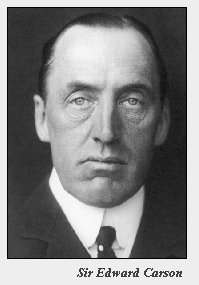 In April 1912, the Liberal Government brought in a third Home Rule Bill. This was strongly opposed by the Ulster Unionist Party, the party of the Protestants, under their implacable leader Edward Carson.

In September 1911 Carson had announced to a meeting of 100,000 people that they would not only resist any moves to establish Home Rule, but stand ready to take over the government of an independent Protestant Province of Ulster. He was – in effect – threatening rebellion.

In January 1912 the Ulstermen began drilling a Volunteer Force, and on 9 April a review of 80,000 Ulster Volunteers was held, at which Bonar Law, the Conservative and Unionist leader in the House of Commons, was one of those who took the salute. Kipling’s poem, passionately urging Ulster’s cause in this atmosphere of high crisis, was published in the Morning Post the same day, and two days before the Irish Home Rule Bill was introduced in Parliament.
Aftermath

Although the Bill passed its last hurdle in Parliament in January 1913, it was now clear that there was no question of imposing Home Rule on the Protestant minority without conflict. However by August 1914 the Great War against Germany became the over-riding concern for politicians of all parties. Some 100,000 Irish fought as volunteers in the British armies. Kipling’s young son John became an officer in the Irish Guards, and was killed at the battle of Loos in 1915. After the war Kipling took on the task of writing the official account of the regiment’s battles.

The Irish Nationalists saw the war as an opportunty to pursue their aim of independence. In 1916 they mounted an armed insurrection in Dublin which was swiftly and brutally suppressed by the British.

After the war the issue of Home Rule for Ireland remained, and in December 1922 an Irish Free State was established by treaty with Britain, but leaving six of the Ulster Counties as part of the United Kingdom. The partition of Ireland, Carson’s legacy, remains a source of dispute and dissent to this day.

Kipling’s anger and bitterness in the crisis years before the war were influenced by his feeling that the Liberals (who had won the General Election in 1906) had thrown away the British victory in the South African War (in 1902) by handing over control to the Boers and—in effect—abandoning British Imperial authority in much of South Africa. (See our notes on “The Science of Rebellion”.) He believed that they were planning what he saw as the same betrayal in Ireland. He felt, too, a generalised contempt for politicians, and for the Liberal Government in particular, whom he saw as unprincipled careerists, at a time when great danger threatened in Europe from Germany.

In March 1914, with—among others—Alfred Milner, Lord Roberts, and Edward Elgar, the great composer, he publicly signed a ‘Covenant’ which pledged the signatories to take any action necessary to prevent the use of the British armed forces to coerce the people of Ulster into accepting Home Rule. See his poem “The Covenant” published in May 1914. In the same month he made an intemperate public speech on the issue in Tunbridge Wells in which he described the Liberal leaders as being like ‘a firm of fraudulent solicitors.’

This `wild outburst’, as the Manchester Guardian described it in a headline, was reported at length in the newspapers. So crude an overstatement was an embarrassment to Rudyard’s
own party and a self-inflicted wound to his own reputation. Never, perhaps, had his reputation been so low with all those
good people of temperate opinions who were sorely puzzled by the intricacy of the Irish problem.

David Gilmour, a more recent biographer who is strongly critical of Kipling’s position at this time, notes (pp. 243-4):

Kipling’s `Ulster’ appeared in the Morning Post (edited by Kipling’s old friend H A Gwynne) accompanied by a leader recommending its `stirring lines’ as a `fitting expression to the feeling aroused by this attempted betrayal’:

Rebellion, rapine, hate,
Oppression, wrong and greed
Are loosed to rule our fate,
By England’s act and deed.

Disinterested readers might have pencilled a few question marks
in the margins of Gwynne’s paper. Where was the rapine to be found in granting autonomy to Dublin? If anyone was in rebellion, was it not perhaps the Ulster Protestant community…?

The blood our fathers spilt,
Our love, our toils, our pains,
Are counted us for guilt
And only bind our chains.
Before an Empire’s eyes
The traitor claims his price.
What need of further lies?
We are the sacrifice.

The pencil here might have queried the idea that John Redmond, the moderate, rather Anglophile leader of the Irish nationalists, could be regarded as a traitor for desiring the kind of autonomy that
Gladstone had proposed many years earlier and which the
dominions had long since acquired.

We know the war prepared
On every peaceful home,
We know the hells declared
For such as serve not Rome –
The terror, threats, and dread
In market, hearth, and field –
We know, when all is said,
We perish if we yield.

Here again a reader might have wondered whether the Irish Cardinal Logue, despite his denunciation of Parnell in 1890 (on personal grounds) was really a sort of Torquemada intent on persecuting non-Catholics.

All the time that Kipling was writing these public poems, full
of anger, betrayal, bitterness, and fear for Britain’s future, he
was also writing a series of children’s poems of an imaginative
delicacy and historical range unmatched by any other English
author … published together with prose stories in
Puck of Pook’s Hill (1906) and Rewards and Fairies (1910), or to accompany C. R. L. Fletcher’s historical narrative in A History
of England (1911).

The Puck stories themselves, written as much for adults as for children, are full of subtle and thoughtful judgements about power and responsibility. In the Prelude to Puck of Pook’s Hill he wrote:

Cities and Thrones and Powers
Stand in Time’s eye,
Almost as long as flowers,
Which daily die:
But, as new buds put forth
To glad new men,
Out of the spent and unconsidered Earth,
The Cities rise again.