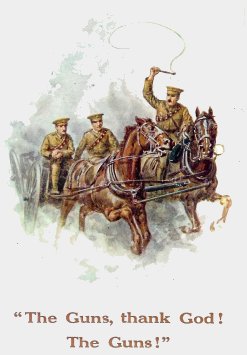 A few months before the outbreak of the Anglo-Boer War, the Royal Artillery was reorganized, to bring it into line with changes in Continental armies. On 1 July 1899, a Royal Warrant established the Royal Garrison Artillery as a separate Corps, to man Coast Defence units and Mountain, Heavy and Siege Batteries. The remainder of the Royal Artillery was designated either Royal Field Artillery (RFA) or Royal Horse Artillery (RHA), the latter to be manned by selected personnel posted from the RFA. This arrangement lasted until 1924, when the three amalgamated once more, although the RHA kept its elite status.

The poem, in the voice of a Gunner, celebrates the work of the artillerymen whose task it was to do much more than just serve the guns during the Anglo-Boer War. It is the Gunner’s boast that while they have carried out that role in extreme conditions, they have also successfully taken on other military roles imposed on them.

A parody of this poem, retaining Kipling’s ‘Infantillery Corps’, circulated in Northern Ireland in the 1970s when artillery units were regularly used as infantry. The 5th Light Regiment, Royal Artillery, did so many 4-month emergency tours that they were jokingly referred to as 5 Light Infantry.

(by Mary Hamer and Roger Ayers, drawing on various sources, in particular
Ralph Durand, “A Handbook to the Poetry of Rudyard Kipling” 1914.)

[Title] The original Latin motto of the Royal Artillery was Quo Fas et Gloria ducunt (‘Where Right and Glory lead’), but in 1833, to reflect its role on every battlefield, King William IV ordered that it should bear the additional title of Ubique (‘Everywhere’) in place of all battle honours won by individual units. When the poem was collected for the Sussex Edition Kipling added the subscript ‘(Royal Artillery)’ plus notes on Blue-Fuse and R.A.M.R.

[Stanza 1] ’You bike’, ‘you bykwe’, ‘ubbikwe’ these different ways of pronouncing ‘Ubique’ varied according to background. A less educated person might say ‘You bike’, while the other two forms reflected differences learned in school.

’Orse, Field, and Garrison see the Background note, above. A play on the established expression of ‘horse, foot and guns’ used to mean the whole army.

[Stanza 2] long-range Krupp long range field gun produced by the German Krupp company, famous for their steel production and for their manufacture of ammunition and armaments. Both the Orange Free State Artillery of the Boer forces, commanded by a German gunner, Major FWR Albrecht, and the Transvaal Artillery, were based on German artillery and used German weapons.

Low-range hill The Boers also used German artillery tactics, including the use of indirect fire where the guns fired from behind cover controlled by an observer. This had not yet been adopted by the Royal Artillery.

you’ll pick it up … five gunners’ ‘ash at the sound of the Krupp firing you’ll pause to listen and so make yourselves into a target. Five of you will be killed before you’ve fired a single round of ammunition from your own field gun; ‘to settle a person’s hash’ is to do for them, to finish them off.

Caught the flash and timed it by the sound because light travels faster than sound it is possible to determine how far away a gun is by noting the length of time which elapses between seeing the flash of its discharge and hearing the sound of its report. This establishes the rough range to a gun where only the flash can be seen.

[Stanza 3] Blue Fuse and make the hole that sinks the trail British field guns of the day were designed for direct fire against an enemy that could be seen from the guns, which was the practice up to the middle of the 19th century. This only required a maximum range of 5000 to 7000 yards, which could be achieved with a maximum elevation of some 16 degrees. The ‘long-range Krupp’ had a range of some 10,000 yards, so to achieve the same range and fire from behind cover, the RFA guns had to be given extra elevation by sinking the ‘trail’ into a hole in the ground. (The trail is used in hauling the gun.) The trail is the part of the gun that rests on the ground at its rear”

Almost all field gun ammunition was shrapnel, a shell case carrying a large number of lead balls that were ejected from the shell in flight to fly forward onto the target. The ejecting charge was initiated by a time fuze. For a long time of flight at long range, a slow-burning fuze was required. These were identified by a blue painted band.

the Mauser’s ‘alf-mile ‘ail the Mauser rifle, used by the Boers, had a range of about 1500 yards but early in the war the RFA deployed at about 800 yards, or half a mile from the enemy, and the RHA even closer. 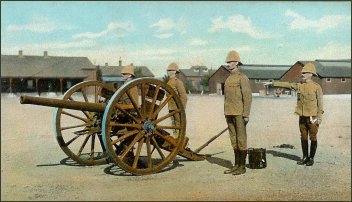 After the disaster of Colenso on 15 December 1899, the guns deployed further back and, where possible, behind cover. This picture of the 15 pounder Rifled Breech Loader used by the RFA in South Africa clearly shows just how defenceless the detachment was in the face of aimed rifle fire. The handspike by which the gun was roughly traversed is shown fitted at the end of the trail. The dark object hanging down from the axle between the wheels is the ‘spade brake’, a spring-loaded spike backed into the ground under the gun to take the shock of recoil and prevent the gun running back.

‘orses’s scream of wounded horses. Thousands of horses died in this war.

[Stanza 4] This stanza and Stanza 5 deal with the pursuit of Boer commandoes in the later guerrilla-war phase of the war.

Bank, ‘Olborn, Bank many of the horses used by the Field Artillery in this war were ones that had been drawing London buses. As a joke, columns would greet Field Artillery on the march with the cries of London bus conductors.

breech-block(s) the moveable steel block by which the breech end of the barrel is closed behind the loaded shell and cartridge.

Khaki muzzles possibly meaning that artillery muzzles were painted brown as camouflage, but taken in conjunction with ‘khaki flood’ more likely to mean that, like the breechblocks, they too were fouled with mud.

[Stanza 6] This stanza hints at what the Gunner would consider ‘being messed about’. Put the guns – and horses and ammunition wagons – on a train for Grootdefeatfontein, a made up name, parodying Afrikaans formations like ‘Bloemfontein’, the name of the capital of the Orange Free State. It implies that the order which sends the gunners is in response to some defeat but is then countermanded and they have to unload the train. Groote means ‘great’ in Afrikaans.

This is followed by the conversion of artillery units into Mounted Infantry, a staff expedient when pitched battles were no longer foreseen, since a high proportion of the artillery were already mounted troops. They became the Royal Artillery Mounted Rifles, or, as Kipling put it, the ‘R.A.M.R. Infantillery Corps’. See Background note to “M.I.”.

‘Infantillery’ a compound of ‘artillery’ and ‘infantry’, possibly Kipling’s coinage, subsequently taken up by others.

[Stanza 7] This stanza now makes clear how dangerous such misuse could be if the ‘perished linesman’, the suffering foot soldier, did not get the Artillery support
necessary to bring relief to infantry by supplementing their fire with shrapnel, forcing the enemy to keep under cover.

There were a number of occasions when infantry were pinned down by Boer rifle fire for hours at a time, the worst being at Magersfontein on 10 December 1899 when the 3rd (Highland) Brigade was pinned down after a failed attack before the Boer trenches all day, partially protected by artillery from Boer fire but, having been initially cold and wet, suffering badly under a scorching sun. They lost 700 men that day.

All of the above are exceptional artillery situations and when coupled with ‘End first’ or ‘any’ow’ (any how) they reflect the Gunner’s feeling that there has been no limit to the things he has been asked to do, however irrational. His conclusion is that throughout the war ‘Ubique’ for the Gunner has meant not just ‘Everywhere’ but ‘Everything’ as well – more than just ubiquitous.

Colesberk Kop  The hillock named Cole’s Kop near the town of Colesbergin the north of Cape Province  had been a landmark for pioneer travellers. A kop was a kopje, a rocky outcrop familiar on the veldt of South Africa.

Quagga’s Poort on the west of the Cape, near Sutherland.