First published, under the title “The Queen’s Uniform”, in W.E. Henley’s weekly Scots Observer (later to become the National Observer) on 1 March 1890 and in the St. James’s Gazette on the same day.

The second four lines of each verse, also two couplets, form a chorus or refrain contrasting this mean behaviour with the way in which the soldier was fêted as soon as he was needed to defend or fight for the civilian. The second couplet of these four lines stresses this difference in treatment between peace and war by repetition of its cause and effect, one half-line of each verse actually being repeated four times, driving home the circumstances when the civilian needs the soldier.

The last verse is superficially the same, but the first four lines challenge the civilian to treat the soldier properly, while the last two lines of the verse carry the punch line of the poem – the soldier is well aware of the civilian’s two-faced attitude.

Kipling had offered Barrack Room Ballads and Other Verses, with twelve ‘soldier songs’, to Thacker, Spink & Co. before he left India in 1889, an offer that they refused. Although it appeared early in 1890, it is doubtful that “The Queen’s Uniform” / “Tommy” was one of the original twelve written in India in 1889, unless it had undergone some revision. The setting of the poem and the bitterness expressed about the attitude of the British public to the soldier in Britain have a force and an immediacy that makes it most unlikely that Kipling acquired these views second-hand in India. Kipling’s close acquaintance with the music-halls on arrival in England may also account for the strong hint of music-hall dramatic monologue in the verses, although the bitterness takes it out of the realm of pure entertainment.

“Tommy” was seldom singled out in its early days for individual praise but when linked with ‘Danny Deever’ and ‘Fuzzy-Wuzzy’ it was covered by the general descriptions applied to them as ‘splendid’ or ‘works of genius’. However, at the time “Tommy” raised the British public’s awareness of the need for a change of attitude to the private soldier to such an extent that the humorous weekly, Punch, devoted much of its Christmas number of 1890 to a spoof ‘Life on Mars’, depicting a parallel Britain on Mars where the British soldier was at last being ‘treated rational’. 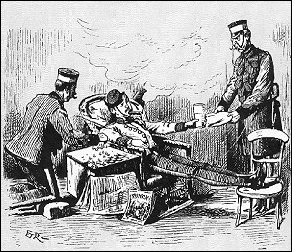 Being Punch, the idea was taken to extremes and Tommy was depicted lounging in his soldiers’ club while his officers waited on him or ran about doing guards and other duties. Totally satirical, but the fact that Punch took it as a major theme shows just how much effect Kipling had had on the public consciousness that year.

Kipling’s use of the original title “The Queen’s Uniform” was almost certainly designed to draw attention to the lines:

…prove it to our face
The Widow’s Uniform is not the soldier-man’s disgrace.

However it appears that the public, like Punch, took the poem to heart as “Tommy”, so that is what it became.

The different ways in which a soldier was viewed in peace and war had been clearly recognised long before Kipling wrote “Tommy” and variations of a four line piece of doggerel are often quoted as an example. An early version is quoted in The History of Bucks County, Pennsylvania, (W.W.H. Davis, 1876) which records that in the Presbyterian Church, Newtown, after the battle of Trenton (26 December 1776) Hessian troops taken prisoner in the battle were first held in the church. Afterwards, on the wall of the church: ‘…was written the following verse in red chalk, which tradition credits to a Hessian captive, which is extremely doubtful, as the writing was in English:’

Despite such precedents, ‘Freshness’ was another quality attributed to these early ballads of Rudyard Kipling, since few literate Victorians had ever thought or written of the common soldier in this way and “Tommy” stood out, encapsulating as it did an attitude which Kipling clearly wanted to see eliminated. This attitude was not, and in some circles still has not, been totally eliminated and some of the following extracts show that, despite being condemned when the freshness wore off, “Tommy” has returned to do the job for which Kipling wrote it.

“One [Ballad] deals, naturally enough, with the want of sympathy shown in public houses to Tommie Atkins in time of peace, as contrasted with the enthusiasm for him in time of war; …”
.[‘The Voice of “The Hooligan’, Robert Buchanan, Contemporary Review, New York, December 1899]

Buchanan’s ‘naturally enough’ betrays his own automatic reaction to anything that has to do with Tommie (sic) Atkins.

“The Barrack Room Ballads fell one by one upon a shocked but enraptured public. … Their success was immediate but, with the exception of ‘Danny Deever’, these verses have now lost their magic.”
[Rudyard Kipling, Lord Birkenhead, Weidenfeld & Nicolson, London 1978]

“Tommy” may have lost some of its initial magic, but it remains a powerful expression of public unease whenever the Army or Armed Forces are neglected by the government of the day. Unfortunately this happens with such frequency that “Tommy” remains one of the most quoted, or parodied, of Kipling’s poems in the press. A recent example under the title ‘Tommy in the 21st Century’ appeared in the Sunday Telegraph of 28 December 2003. One refrain of the verses, which were written by Peter Pindar and subtitled ‘Queen’s speech praises Armed Forces’ (that speech having being written for Her Majesty by the government), was:

I think that Kipling would have been immensely saddened if he had known that “Tommy” could still be applied 113 years after he wrote it; but not surprised, except possibly by the British Army being back in Kabul.

But “Tommy” is not just being quoted in respect of the British soldier:

“ ‘Tommy, A Lawyer’s guide to Veterans’ Affairs’ is the name of the quarterly newsletter published by the Veterans Law Section of the US Federal Bar Association, but I had somehow previously failed to make the obvious connection between the poem and the newsletter. … [In the poem] the speaker is calling our attention to the gross disparity in the value that the citizenry places on its soldiers. The unjust disparity he observes is the miserable treatment accorded the soldier and ex-soldier in peacetime, contrasted with their treatment when the winds of war are blowing or, as Tommy puts it, when ‘there’s trouble in the wind.’ … As an attorney, I respect the way Kipling’s speaker, `Mister Atkins,’ makes his case; his supporting examples are clear and visual, his logic is straightforward and his closing line poses a clear point for all Americans to ponder.”
[Thomas Roy Harney, The Stars and Stripes, 26 January 1997, quoted in the U.S. House of Representatives by the Hon. Ms. Zoe Lofgren].

In an article by Ian Cowie on Saturday, 1 August 2009, the Daily Telegraph refers to the Government’s
‘shameful attempt to cut compensation paid to members of the Armed Forces wounded in the line of duty’, and encourages its readers to join the paper’s ‘Justice for Wounded’ campaign. Cowie’s closing paragraph ends:

There is, of course nothing new about public and politicians’ ambivalence towards the Armed Forces; willing the end but not the means or money to achieve it. This was best described by Rudyard Kipling … in his Barrack Room Ballads. If any reader is unsure about supporting the Telegraph campaign, I hope a few verses from his classic poem “Tommy” will do the trick.

He then quotes the last three stanzas in full.

A number of parodies of “Tommy” have circulated in 2008/9 in e-mails, blogs or army chat lines on the internet, written by soldiers and based on their current experiences. Some of the metre and rhyme might be questionable but there is no doubt about the strength of feeling. Kipling’s original continues to provide a powerful means of expression to soldiers who find themselves in a situation very like that of Kipling’s Tommy of almost 120 years ago. One version, current at the beginning of 2009, which acknowledges Rudyard Kipling, ends:

O then we’re just like ‘eroes from the army’s glorious past.
Yes, it’s “God go with you, Tommy,” when the trip might be your last.
They pays us skivvy wages, never mind we’re sitting ducks,
When clerks what’s pushing pens at ‘ome don’t know their flippin’ luck.
“Ah, yes” sez they “but think of all the travel to be ‘ad.”
Pull the other one. Does Cooks do ‘olidays in Baghdad?
It’s Tommy this, an’ Tommy that, an’ “Tommy, know your place,”
But it’s “Tommy, take the front seat,” when there’s terrorists to chase

.
An’ the town is full of maniacs who’d like you dead toot sweet.
Yes, it’s “Thank you, Mr Atkins,” when they find you in the street.
There’s s’pposed to be a covenant to treat us fair an’ square
But I ‘ad to buy me army boots, an’ me combats is threadbare.
An’ ‘alf the bloody ‘elicopters can’t get in the air,
An’ me pistol jammed when snipers fired. That’s why I’m laid up ‘ere.
Yes, it’s Tommy this, an’ Tommy that, “We ‘ave to watch the pence”;
Bold as brass the P.M. sez, “We spare them no expense.

But I’ll tell you when they do us proud an’ pull out all the stops,
It’s when Tommy lands at Lyneham in a bloomin’ wooden box!.

And now, in 2012, the Daily Telegraph for Friday 13 July, in response to the announcement by the Home Secretary, Mrs Theresa May, that troops would have to be employed to provide security at Olympic venues to cover a shortfall in commercial security staff, had its daily political cartoon showing a soldier on guard as crowds enter an Olympic stadium. He wears a Security flash above his Iraq and Afghanistan medals and the caption is:

O it’s Tommy this, an’ Tommy that an’ “Tommy go away”,
But it’s “Thank you, Mister Atkins”, when he rescues Mrs May.

In the same paper on Saturday 14 July is a leading article by Matthew Norman severely critical of the intention to employ soldiers in place of civilian security staff just because a civilian firm failed to recruit adequate numbers. Norman also quotes “Tommy”, this time the last four lines and then, questioning just what it is the soldiers might be expected to do, ends his own parody of Kipling’s words with the thought that, as a result, it may end up as:

Its “Tommy, frisk that toddler” an’ its “Tommy, clean the loos”.