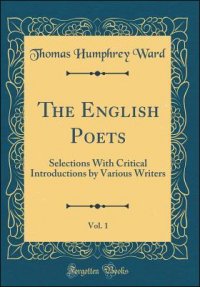 The review was unsigned, but the current Editor
of the Times Literary Supplement confirmed its
authorship to R.L.Green for his ‘Critical Heritage’
(1971)

Thomas Humphrey Ward (1845-1926),
husband of the novelist Mrs. Humphrey Ward’, was a
Fellow of Brasenose College, Oxford, and on the
staff of The Times from 1881. In that year he published
what became a celebrated edition of ‘The English Poets’.

India has given us an abundance of soldiers and administrators but
she has seldom given us a writer. There is no question, however, that
she has done this in the person of the author of the numerous short
stories and verses of which we give the titles below. Mr. Rudyard
Kipling has the merit of having tapped a new vein, and of having
worked it out with real originality. He is even now a very young man,
in spite of his seven or eight small volumes; in fact, we believe he is
not yet twenty-five. The son of an Englishman who has long been
head of the Government School of Art at Lahore, Mr. Kipling was,
in the usual way, sent home in early childhood to be educated, and
at sixteen or so returned to India to earn his bread. He soon showed
that his faculties of keen observation and incisive writing were already
developed to an extent far beyond his years. Circumstances appear to
have thrown him into journalism, and his talent soon found its proper
scope in the stories that he wrote for different Indian papers, especially
for the Week’s News. They made an impression, and when they came
to be reprinted Mr. Kipling found himself famous in Indian society
as the writer of sketches which were generally accepted as represent-
ing, with a fair amount of truth and a great amount of pungency,
scenes of a very diverse kind. For he does not confine himself to one
class of subjects. He is at home at Simla, and in the life of‘the station’,
but he is very far from considering that the English ladies and gentle-
men there assembled either constitute the whole of India, or, indeed,
are the personages best worth studying there. He deals also with that
unfortunate result of our settlement in India, the Eurasian, and some
of the most brilliant of his tales have this seldom successful growth
for their topic. Again, one of his favourite studies lies in the lower
ranks of the British Army, and he may, indeed, be almost called the
discoverer, as far as India is concerned, of ‘Tommy Atkins’ as a hero
of realistic romance. But if English ladies and gentlemen are, numeri-
cally speaking, almost as nothing in comparison with the millions of
natives, the private soldiers are not much more numerous, and it was
not to be expected that a writer so open-eyed as Mr. Kipling should
represent these as including all that was worth description in the life
of that vast continent. Accordingly some of the best and most pene-
trating of the Plain Tales from the Hills and the whole of the little col-
lection called In Black and White deal with various aspects of native
life, and in this department Mr. Kipling’s serious and seemingly almost
instinctive knowledge is not less evident than in his stories of European
life. In fact, from the artistic point of view we should be inclined to
place these stories at the top of all his compositions. That very grim
story ‘In the House of Suddhoo’, the tragedy called ‘Beyond the Pale’,
and one or two of the ‘Black and White’ series seem to be almost the
best of Mr. Kipling’s writings, perhaps because they appear to lift the
veil from a state of society so immeasurably distant from our own and
to offer us glimpses of unknown depths and gulfs of human existence.

Nothing is more difficult to review than a collection of short stories.
Three-fourths of the charm must lie in the stories themselves, in the
plot, and in the characters whom the author can at most indicate by a
few strong touches. The reviewer, however, cannot follow him, and
cannot tell the stories again one after another; and the only alternative
left to him, that of generalizing as to the writer’s method and the world
in which he moves, is at best unsatisfactory. But Mr. Kipling provides
a certain connection between the stories that make up his different
books; he does not leave his labyrinth entirely without a thread.

There is, for example, a strong family likeness among the tales which
he tells of his ‘Three Musketeers’—three private soldiers of the Indian
army, linked together by a close and romantic friendship, different
as are their races and characters. The Irishman, Mulvaney, the cockney,
Ortheris, and the big Yorkshireman, Learoyd, are comrades in weal
or woe, proud of the regiment, devoted to each other, given to a
certain amount of quarrelling over their cups, and of horseplay at any
time, but at bottom admirable specimens of their class and profession,
and interesting by the tenacity of their affection for one another.

Whether they have their exact personal counterparts in real life, we
cannot say; probably Mr. Kipling, like a true novelist, has taken but
the germs of these characters from fact and developed them by his
imagination alone. But they are singularly consistent, and poor Mul-
vaney especially, the strongest and the best of the three, who was a
corporal once but had to be ‘rejuced’ for drunkenness, is a truly
attaching creature from his strength and his little weaknesses. The
comedy, the dull hard work, and the not unfrequent tragedy of life in
the ranks are admirably given in the stories which concern these three
soldiers. In some of them we see hard fighting, as in that called ‘With
the Main Guard’, which contains a truly brilliant account, put in the
mouth of the Irishman, of a struggle between the ‘Tyrone’ regiment
and the Afghans. In ‘Black Jack’ a section of the same imaginary
regiment is set upon murdering its sergeant, and Mulvaney tells how he
was able to upset the little conspiracy. ‘In the Matter of a Private’ is a
gruesome tale of a soldier who literally runs amuck with his Martini-
Henry in a fit of heat hysteria; and we may here remark that in nothing
is Mr. Kipling more successful than in his truly lurid descriptions and
indications of what Indian heat can be, and what its effect on the minds
and bodies of the Europeans who have to suffer it. We in England seem
to take for granted that India is hot, but scarcely one of us makes any
attempt to realize what that heat really means, especially to the men
on whom our power there really reacts, our private soldiers, with their
few comforts, their dreary, enforced leisure, and their almost irresis-
tible temptations for getting into mischief. Mr. Kipling has used to the
full the novelist’s right and the novelist’s power of bringing home a
practical fact like this to his readers, and although his aim is artistic in
the first place and practical only in the second, he will certainly not be
unwilling that the British Government as well as the British people
should come nearer to realizing what these terrible conditions of life
actually imply. It is not, however, all tragedy and all horror with
Private Mulvaney and his friends. Persons with so keen a sense of
humour as these three are likely to find plenty of occupation for it even
in India, and this we are happy to say Mr. Kipling’s heroes do.
Plain Tales from the Hills is the longest of the volumes, and, as its
title implies, it deals mostly with Simla life. The picture that Mr.
Kipling gives is not altogether a pleasant one; but then he does not
profess to be an optimist or to represent society as all varnish and
veneer. And probably he himself would be the last to maintain that his
Mrs. Reiver and Mrs. Mallowe, and even the great Mrs. Hauksbee,
‘the most wonderful woman in India’, represent Anglo-Indian society
as a whole, or that even at Simla men and women have nothing to do
but to make love where they ought not. Still, those who have had the
most experience in India—by which we do not mean those who have
moved longest and most smoothly along the official groove—will
recognize that in many respects these stories give a true picture of what
is at all events not an inconsiderable section of Indian society. If it
fails of being quite a first-rate picture, it is because Mr. Kipling, though
an admirably direct writer, is comparatively wanting in style. People
have compared him with Guy de Maupassant, not, let it be observed,
that he shows any disposition to emulate the French writer in his choice
of subjects, (which would be, indeed, even now, an impossibility for
an Englishman), but because of his incisive power of drawing vignette
portraits and of representing in half-a-dozen pages a complete action.
There is, however, an important difference. Guy de Maupassant is a
stylist of the first order, and this Mr. Kipling is not yet, whatever he
may come to be. His admirers, however, may fairly hope that, in this
respect as in others, he may go very much further than he has yet gone.

Many of the stories which he has lately published in the English
magazines—for he has returned to England, probably for good—show
a distinct advance in artistic power on any of those he published in
India, and the volume called Departmental Ditties, clever and bright as
it is, is in no respect on the same level as certain verses which have
appeared with and without his name during the present year in British
periodicals. Even so, we are far from asserting that Mr. Kipling has yet
made any claim to a place in the first rank of contemporary writers.

He has given evidence of a knowledge of Indian life which would be
extraordinary in any writer and is phenomenal in one so young. He has
shown a truly remarkable power of telling a story dramatically and
vividly. He has written a number of amusing occasional verses, not
without point and sting. But, as yet, he has not attempted ‘the long
distance race’, and the question in which the rapidly-growing number
of his readers are now most interested is the question whether he
possesses staying power. We sincerely hope that he does, and that he
will show it in good time; but, meanwhile, it is to be hoped he will
not write himself out. Modern magazines and their eager editors are
a dangerous snare in the way of a bright, clever, and versatile writer,
who knows that he has caught the public taste.