[Title] The title is probably explained by Kipling’s frequent use of the word (some twenty-six times) to refer to the children. See also “Swept and Garnished” (A Diversity of Creatures) for the ghosts of children killed in the 1914-18 War.

[Page 303 line 13] godmother there is a village called Washington in Sussex and several towns and cities here and in the United States, including the capital, named after George Washington (1732-1799) the first President. Kipling is referring to the custom of naming a child after a godparent.

[Page 303 line 18] heavier traffic guns were made in Sussex – see “Hal o’the Draft” (Puck of Pook’s Hill) and carried to the coast for shipment until mining for coal on a large scale began in Wales.

[Page 304 line 4] the great Down Chanctonbury Ring, a notable feature of the landscape between Washington and Steyning.

[Page 304 line 23] a keeper in this context a game-keeper employed to look after the wild-life on the estate and keep an eye out for poachers; see “A Deal in Cotton” (Actions and Reactions) page 173, line 22.

[Page 305 line 6] mullioned windows with the glass divided by (usually) stone shafts, as at Bateman’s.

[Page 305 line 7] rose-red an echo of Burgon’s Petra : A rose-red city, half as old as time’. which itself echoes Italy, a Farewell by Samuel Rogers. There has been much speculation as to the identity of the house which may be an amalgamation of several such great houses, such as Great Dixter, or Brickwell at Northiam on the Kent border, scene of some of the action of “Gloriana” where it is called “Brickwall” (Rewards and Fairies). See also this note on the possible location of the house.

[Page 307 line 19] star-sapphire a transparent gem, variety Corundum from Sri Lanka. Small amounts of iron and titanium give it a delicate shade of blue, sometimes with a star of six rays.

[Page 308 line 32] how could I dream about colours ORG suggests s that those blind from birth have no conception of colour. 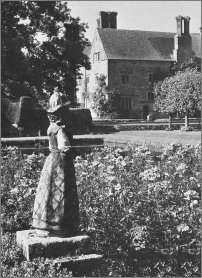 [Page 310 line 22] lead-figures there were lead statues of a boy and a girl in Kipling’s garden at Bateman’s (right).

[Page 312 line 5] armour-plated conning tower of his caste See A Fleet in Being page 53, line 20. Butlers were often depicted in fiction as having a very formal and somewhat chilly manner.

[Page 312 line 17] carriage -folk upper-class people of wealth, position and education. Like many of all social classes at the time, however, she obviously looks upon motorists as the lowest of the low, perhaps because they frightened the horses !

[Page 313 line 8] a six-inch Ordnance-map a map at the scale of six inches to the mile.

[Page 316 line 20] Those Colours which you saw Kipling’s sister (Alice,
1868-1948, always known as ‘Trix’, who married John Fleming) claimed to have seen these phenomena as Kipling describes them. She became a well-known ‘psychic’ and medium under the pseudonym of “Mrs. Holland.”

[Page 317 line 6] the figure of the Egg Derek Greatrex writes:

I believe this refers to the human aura, an egg-shaped field surrounding the body, which psychics (like Kipling’s sister) claim to perceive through clairvoyant vision. Kipling was probably familiar with the concept through Trix and other contacts; he was obviously interested in the paranormal, despite his warnings against mediumship in ‘The Road to En-dor’ and at the end of this story.

The colours in the aura are said to reflect the spiritual and emotional state of the person: the lady of the house, though blind, perceives the narrator’s anger with himself and others. They are not of course physical colours, but produce a similar effect on the mind. Probably the best account is in Theosophy, by Rudolf Steiner (various editions). [D.G.]

[Page 319 line 4] walk in the wood The narrator does not yet understand that bereaved parents in that village would see their dead children in the woods.

[Page 319 line 28] the horns of Jericho See Joshua 6,20 ‘It came to pass when the people heard the sound of the trumpet, and the people shouted with a great shout, that the wall fell down.’

[Page 320 line 20] not as a menial should lift his eyes to his divinely appointed superior In Kipling’s day there was a strong sense of social hierarchy as something sanctioned by God. In the Catechism of the Church of England ‘to be learned of every person before he be brought to confirmation by the Bishop’, the child promised ‘to hold myself lowly and reverently to all my betters …To do my duty in that state of life which it shall please God to call me’. The narrator is ironic, but he is making the point that Madden is looking at him as an equal, rather than a social superior.

[Page 321 line 28] the Oath of Æsculapius the Hippocratic Oath which obliges a doctor to observe medial ethics.

[Page 322 line 1] cerebro-spinal meningitis an inflammation of the tissues of the brain or spinal cord, or both, often fatal. (Black)

[Page 322 line 17] tonneau the passenger compartment of an early motor-car, usually open to the elements.

telling her beads using her Rosary – a string of beads of various sizes – to assist her prayers.

[Page 323 line 21] groins in this context timber or masonry walls which run out to sea at right-angles to the beach to prevent the sideways drift of sand and shingle along the coast. Usually spelt groynes.

[Page 323 line 22] Ushant Ouessant – the most Westerly point of France, with its lighthouse, an important landfall or departure for mariners.

[Page 323 line 25] bellowing sounding their foghorns to warn others of their approach.

our perilous gates the many rocks, shoals and other dangers to navigation lying in wait for mariners approaching the shores of England.

[Page 324 line 13] insure such stray lives the baby’s life could only have been insured against the usual funeral expenses.

[Page 324 line 21] evergreen not in the Scribner’s version of the story.

[Page 325 line 17 onwards] Men and women have sometimes … lived in it not in the Scribner’s version.

[Page 325 line 24] adzed timber shaped with an adze, a type of axe with a curved blade at right-angles to the shaft. Still used by shipwrights and others.

[Page 329 line 13] lamp the house has no electricity so oil (paraffin / kerosene) lamps would have been used. Only after the Kipling’s moved in was electric lighting installed at Bateman’s. See “Below the Mill Dam” in this volume and Something of Myself, p. 179.

[Page 329 line 22] tallies wooden sticks used as records of transactions by cutting notches on them in a particular manner; the stick was then split and each party had a piece as a record which was proved by marrying them together so that they ‘tallied’.

[Page 330 line 8] in hand not let to a tenant but farmed by the owner as did Kipling and his wife at Bateman’s.

[Page 330 line 11] Turpin … a highway robber there was indeed a highwayman named Dick Turpin, born 1706, hanged in 1739, so the name had villainous associations.

[Page 331 line 15] cake in this context concentrated food for cattle, made from the compressed seeds of soya bean, groundnuts and various other substances.

[Page 331 line 16] You’ve broken the lease Charles Cowap, rural practice consultant at the College of Estate Management and Principal Lecturer at Harper Adams University College writes: ‘the lease may contain express terms on any of the above matters, e.g. as to level of stocking, treatment of awaygoing valuations or entitlement to improvements. The Sussex custom for repairs to buildings was for the landlord to provide materials
and the tenant to pay for labour and carriage.’

[Page 331 line 17] dragging the heart out of the farm exhausting the nutrients in the soil.

[Page 332 line 1] the covered manure
Kipling is probably referring to the value of the muck which the
farmer could sell. Having been covered it will be more fertile because the
rain will not have leached out some of its nutrients.

[Page 332 line 28] Then I returned … screen This sentence is not in the Scribner’s version, which instead has: It was a curiously mottled piece of birch, the layers of bark grilled by the heat.’

[Page 333 line 31] no impassable iron iron was supposed to stop spirits from entering a dwelling – see “Cold Iron” (Rewards and Fairies) and the poem of the same name.