This dinner, at Claridges Hotel, in honor of Richard Bedford Bennett, Conservative Prime Minister of Canada, 1930-1935, celebrated the Ottawa Agreements arising out of the Imperial Economic Conference held earlier in the year, largely through Bennetts efforts. They provided for preferential trade between Creat Britain and the Dominions, or, as Sir Robert Home, presiding at the dinner, put it, the Agreements “enshrined a great principle … for the first time the British Empire had become an economic unit.” Practically, this meant increased tariffs against non-Imperial goods. That is the “principle” to which Kipling’s remarks refer: 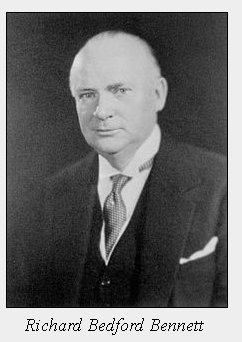 Kipling was seated at the head table and was the object of some florid compliment from Bennett, who said: And if that night he derived more than common pleasure from being there, it was because seated on his right was the “Poet Laureate of the Empire,” who had made it possible for men and women living under our Flag to rejoice in the greatness of their citizenship and appreciate what it was to be a British subject. The lessons Mr. Kipling had taught had been lessons not of great victories on sea and land—although that too had been done—but of achievements of men who had laboured in far off parts of the Empire, (The Times, 15 December 1932).

Kipling had been in ill health and had not gone up to London for three months before this dinner, which he described to his daughter Elsie thus:

…. out with Mother to Claridges for the dinner to Bennett and, incidentally, Bruce [High Commissioner for Australia]. My seat was between B. and Churchill.
I got too much of CL (he is not a vitamin) and too little of B. And as you saw, and derided me for, at the end of the show they called for me and I had to get my wits into some shape (I had been solemnly promised there would he nothing expected of me) and “say a few words.” But, anyhow, all that did not bother me, and I slept like twin babies after.
(19 December 1932: TLS, Kipling Papers, University of Sussex).

Mr. Rudyard Kipling, who also rose on repeated calls for a speech, said:—“I am unfortunately old enough to remember that in 1897 Canada made her first preferential tariff. Well, 35 years is a fairly long slice of life of a man, but I distinctly remember a lot of young and middle-aged men who were filled with hope and that sort of thing. Those 35 years went, I might almost say, down the sink in the profound political contemplation of the inevitable. It is a curious ethnological fact of the deepest significance that you cannot reallv let any light into certain racial mentalities without breaking the head in several places.

I have listened here, with how deep emotion I will not dare to tell you, and there has come back a great deal of that hope. I believe in hope. I do not know that I believe very much in principles—in politics. If I may say so, it does look to me as if for once in our national and commonwealth life we have established a principle. For pity’s sake, let us hold to it without too many compromises, too many gestures, and too many dilutions.” (Cheers.)
—The Times, 15 Decmber 1932