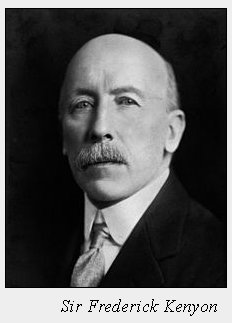 Sir Frederic Kenyon (1863-1952), a distinguished paleographer and philologist employed at the British Museum since 1889, was Director of the Museum, 1909-1930. Kipling, as he says, had known him through their association on the Imperial War Graves Commission where Kenyon had been highly useful as a mediating voice, reconciling the arguments among artists, advisors, and administrators. Kipling’s speech is in reply to the toast to the health of Sir Frederic at the luncheon following his presentation to the freedom of the Company of Stationers.

A luncheon was held after the ceremony at which the Master presided and proposed the health of Sir Frederic Kenyon.

Mr. Rudyard Kipling, in supporting the toast, said that the world did not know yet fully or certainly at what time and in what sequence mankind translated their conceptions of beauty into form and shape, the wreckage of past ages had been too complete. All that they had now were salvage and sample. Those beauties they had, in recent times, begun to collect and catalogue, housing them in places called museums, and the sight of those collections confirmed them in their belief that they came of an ancestry that was at least sane-minded, laborious, and delighting in loveliness of design. Sir Frederic Kenyon, as Director of the British Museum, had been, if he might say so, the senior warden, exponent, and interpreter of the continuity of culture and arts of the past to a very large portion of the world. (Cheers.) That work demanded a great singleness of aim and the power of controlling a multitude of means, and also, not only mere knowledge, but that rare knowledge of where knowledge could be found, and could be applied. Speaking as a philistine, he thought that work must have heen rather interesting just now, in a world whose notions of continuity of art did not go beyond a five-reel film, and wherein the words culture and art were an offence to the gifted self-expressionist. (Laughter.)

If they looked into those dreadful books of reference where a man’s life was stated as baldly as his epitaph would be, they would see that Sir Frederie was incidentally adviser to the Imperial War Graves Commission, on which he (Mr. Kipling) had had the honour to serve ever since those early and confused days when no man knew where to begin first in a desolated world. There were advisers and advisers. Most of them filled him with a burning desire to go and do otherwise. (Laughter.) But there were advisers who considered the bowl of their pipe in a luminous silence, and said very little, and lo and behold something good and harmonious came to pass.

He did not know Sir Frederic’s methods of advising, although he had watched him between 110 and 120 occasions in committee. But he knew the War cemeteries were designed and beautified by men of varying talents and genius, all inspired by equal devotion, and today in the whole sweep of that frontier of the dead, from Dunkirk to Baghdad, those cemeteries were keyed to one tone, that of dignity, beauty, and significance. All the achievement, all the efforts and personalities of the living, which created that beauty and inspired that significance had been so wrought and so blended, that throughout all the cemeteries it was the dead and the dead only who possessed that serene land. (Cheers.)
—The Times, 3 June 1931