Kipling accepted appointment to the Imperial War Graves Commission on its founding in 1917 and was thereafter an active and conscientious member of the Commission. In its early days the Commission had to struggle to establish three regulations: absolute equality of treatment; the provision of a headstone rather than a cross; and the refusal to allow repatriation ol the remains. Kipling’s remarks printed here were made to a Parliamentary Committee meeting at Westminster in anticipation of the debate on the Commission’s policies in the Commons on 4 May, when those policies were affirmed.

Winston Churchill, as Secretary for War, was present at the committee meeting (The Times, 28 April 1920). Kipling’s visit to the cemetery at Le Treport (between Dieppe and Calais) to which he refers must have been made during his trip to France in March-April ol this year, his first visit to postwar France (see also the reference to his visit to the “invaded areas” in the speech of 28 April, below).

Mrs. Kipling’s diary for 27 April reads: “Rud spends the day in London on Graves Commission. He talks to 150 members ol the House of Commons in the Committee Room” (Rees extracts).

Mr Rudyard Kipling’s speech was in the main a reply to Parliamentary criticism on the design of the memorial headstones in British war cemeteries in France and Belgium. The Commission, he said, at the very beginning unanimously decided that there should be absolute equality of treatment of the graves ol those who had made equal sacrifice in the service of their country. There were in France and Flanders alone over half a million dead, belonging to many races and to many creeds. They were inextricably mingled as they lay, and they had fought and died for one great ideal.

Another leading aim of the Commission was that the graves and the cemeteries should endure for ever. The durability of every detail had been studied, with the object of designing a memorial which would last longer than any other form. Little space could be given to the headstones, for the dead often lay shoulder to shoulder and sometimes there were two or three in each grave. The headstones were let into long concrete beams, so that no stone could fall unless the whole beam went down. This again made a certain uniformity necessary, and step by step the Commission were forced to the conclusion that a certain uniform type of headstone could alone prove enduring. 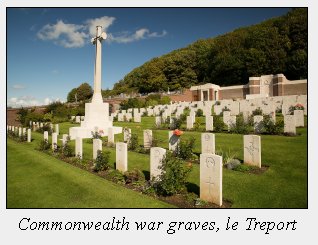 Elaborate tombstones such as those who could afford them would like to erect to their dead, in marble or mosaic or in relief, would not stand so well against the weather, and it was not thought wise or expedient to admit them into cemeteries where soldiers lay shoulder to shoulder. He had seen the finished cemetery at Le Treport, and was moved to the heart by the dignity and simplicity of its arrangements and by the sense it gave of restful permanence.
—The Times, 28 April 1920.