The opening ceremony took place at the Pimlico Club, where this speech was given. 1 transcribe the title as it appears on the typeseript of the speech in the Kipling Papers at the University of Sussex.

Now that the test of the war has proved to ourselves that we are one people throughout all our nations, we can recognize more clearly than before the spirit of service which has worked to that end in our Blood Royal. It has always been the essence of their strict and high tradition that they should be the first to give their time, labour and council to all matters that touched the well-being ol any part ol the Empire. To this, the purpose, the knowledge and the interest of their working lives have been freely spent with little thought of self: in no case more eminently than in that of His Royal Highness, the Duke of Connaught. 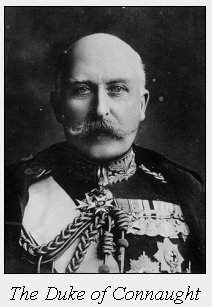 His work in this regard has not been a thing of yesterday, or even of the day before: but a long labour of many days beneath many skies on behalf of widely separated interests, under heavy responsibilities. One may dare to hope that the life-long toil may have been made lighter for him and his by the trust and affection that has preceded and followed them always.

His Royal Highness has come to us this afternoon to open these clubs of the Maple Leaf—Institutions whose very existence, a few years ago, would have been as inconceivable as the magnitude of the Canadian Armies for whose benefit they exist. But the war has changed the outlook on all matters seen and unseen. We are, perhaps, less impressed than we used to be by mere numbers without reason, by mere size without soul. We realize more and more clearly that the things which endure and, at long last, overcome every malice of fortune or man are neither threats, boasting nor terror, but the steadfast, slowly-built virtues of labour, self-sacrifice and devotion exercised by each individual in the place to which his destiny and the needs of his fellow-subjects have called him.
.
—Typescript, Kipling Papers, University of Sussex (KP 28/9).