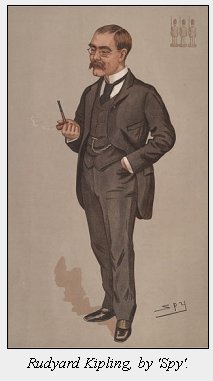 Kipling, on a visit to England from Vermont in April to August 1894, permitted himself to be lionized far more than his usual caution allowed, attending dinners in London, giving interviews, having his portait made for Vanity Fair and the Pall Mall Gazette, and spending weekends at country houses.

One of these occasions was a dinner given by the Authors’ Club in the Venetian Room of the Holborn Restaurant with Kipling and (Sir) Harrv Johnston as the guests of the evening.

Johnston (1858-1927), celebrated for his travels in Africa, was then British Commissioner for South Central Africa. Kipling had known him at least since 1890.

Other guests at the dinner included Kipling’s father. John Lockwood Kipling, Walter Besant, William Black. Sidney Colvin. Anthony Hope Hawkins, and John Davidson. Oswald Grawfurd (1834-1909), who presided, had been British Consul at Oporto. 1867-1891, and was the author of books about Portugal as well as of fiction and poetry.

Mr Rudyard Kipling, who was received with loud cheers, said tliat in calling upon him to respond to that toast it was a clear case of making a man speak who did not speak before. Mr. Oswald Grawfurd might he a genius, but he did not like the process of being made to speak. (Laughter and cheers.) Frankly, they had done him a very peculiar honour, and he did not know in what words he could thank them. They were men of his own business and of his own trade, and they knew how very much a man valued the good opinion of his fellow-professionals. (Cheers.) They also knew that the little things that brought a man luck, that made his work successful, came from the outside. Men could take no credit for their best work: it came from without and they could only say that they did not know how they did it. For the rest he could onlv thank them again from the bottom of his heart and sit down. (Cheers.)
—’The Times, 10 July 1894.