Louis Blériot, a French aviator, had made the first crossing of the English Channel, from Calais to Dover, in July 1909. In preparation for cross-channel “weight-carrying” competitions among aeroplanes between Folkestone and Boulogne, to be held in 1911, the municipal officials of both cities had held two conferences on the subject of air safety; they were now holding a third, at which Kipling volunteered to be present.

He had already announced his interest in the subject by an article on “Protection Suits for Airmen,” published in The Car for 27 July 1910 and illustrated with Kipling’s drawings for “air-cushioned body armour.” The “recent events” that have “sadly taught” the urgent need for the safety of aviators would include the death of Charles Stewart Rolls, of Rolls-Royce, the first fatality of English aviatiom Rolls had been killed in a crash at Bournemouth on 12 July 1910.

[….] MR. RUDYARD KIPLING, the famous poet-author, had announced to the Mayor his desire to he present, and the Mayor was waiting to receive him in his parlour at the Town Hall at 2:30 p.m., which was the time fixed for the conference to commence. A number of delegates were waiting in the Council Chamber, but still the meeting did not start, for the Mayor was still awaiting Mr. Kipling. The amusing part of it was that Mr. Kipling was quite unaware of this little item in the proceedings, and had been for some time mixing with the delegates, no doubt wondering why the proceedings did not commence. However, in time the matter was rectified. Mr. Kipling was presented to the Mayor, and in due course the proceedings commenced [….] Mr. Rudyard Kipling was elected to the chair, and he appointed Mr. Perowne Vice-President of the meetings, and Mr. Stephen Marples, Secretary.

In opening the discussion on the question of safety appliances for aviators, Mr. Kipling said that matter, as recent events had sadly taught them, was one of the utmost importance, but it was a question on which few people could express an opinion with any authority, because they were moving about the worlds not yet realised. They were making conditions for a game they did not understand, and everything they did at that meeting must be extremely tentative. The French delegates, taking pity on their insular ignorance, might as much as possible explain to them what was being done on that question of safety appliances. It seemed that some form of pneumatic jacket was suggested to guard aviators against injuries from a moderate, but not an excessive fall. 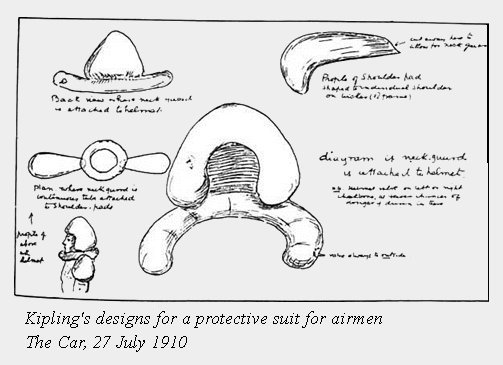 Mr. Quinton spoke at length in French on the necessity of an improved type of motor for aeroplanes [….] Mr. Kipling said that they were much indebted to M. Quinton for the outlines he had given of the work accomplished in the direction of ensuring safety for the aviator in the machine and safety for the aviator when he fell out. He gathered that there were prizes amounting to nearly £6,000, which were shortly to be offered for the perfect motor. In everybody’s interest— both for the sake of the people underneath, and of the gentleman in the air—it was to be earnestly hoped that the perfect motor of the future would ere long be invented. Coming to the question of safety appliances, there was a certain delicacy in testing any safety clothing, for the obvious reason that in order to test clothing, there had to be a man inside, and as a general rule an individual strongly objected to testing safety clothing from a great height. M. Quinton’s idea was to put breakable material in such a suit, and to drop it from a height, or to drop something on it. That was interesting, but by no means certain. The only certain way would appear to be the old and brutal way, by which most things in this world were discovered, and which might be expressed in the sentiment: Let’s kill a man, and find out. He was very’ much afraid that little by little they would arrive at the more or less perfect protective dress at the price of bloodshed […. |

Mr. Kipling said that the next question for them to consider was that of the proposed cross-Channel flights, with a passenger or passengers, next summer, and it was one on which full discussion was advisable [….]

Mr. Kipling, closing the discussion on this matter, said that if five years ago they had assembled in that Hall to discuss the question of aerial commercial transit between Folkestone and Boulogne they would have been turned out as lunatics by an apprehensive policeman. Five years hence he hoped they would be discussing in that Hall things more wonderful still. They were only at the beginning of a new world.
—Folkestone