Published in the Standard on 27 July 1906. Not subsequently collected except in the 2013 Cambridge Edition, (Ed. Thomas Pinney) p. 2075, and ORG p. 5413. Kipling sent the poem to his ftiend Howell Gwynne, Editor of the Standard, on July 25, and asked him to give it to the Press Association: ‘I want it distributed as widely as possible.’ (Pinney, Poems p. 2287)

As Thomas Pinney notes, the poem was occasioned by the decision of the Liberal government in Britain in 1906 to give responsible government in South Africa to the Boer Republics, only four years after the conclusion of a war which had been fought in order to enforce British rule. Much blood had been shed in this endeavour, and Kipling saw the decision as an act of treachery by the Liberals, hence the vehemence of his language.

At this time Kipling kept closely in touch with affairs in South Africa. He frequently wintered at “The Woolsack”, the house below Table Mountain built for him by Cecil Rhodes, and had many friends in South Africa. In 1906 he had been there from early January until mid-March. Meanwhile, in the UK General Election of January/February, the Liberals had defeated the Conservatives in a landslide.

[line 1] The shame of Amajuba This refers to the The Battle of Majuba Hill on 27 February 1881. the final and decisive battle of the First Boer War. It was a resounding victory for the Boers and a humiliating defeat for the British. 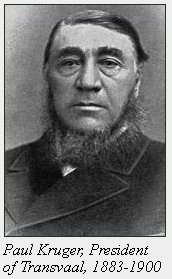 [line 8] Into the Stranger’s hand. Kipling’s ‘strangers’ are the Boers, farming people of largely Dutch descent. They were in the majority in the Boer republics of Transvaal and the Orange Free State, and would henceforth govern these territories, which they had founded, and had always sought to govern.
The minority of British descent would thus be denied British rule.

See also our notes on “A Burgher of the Free State” . and “The Science of Rebellion” .

[line 5] the slough of their despond in John Bunyan’s Pilgrim’s Progress (1678) the ‘slough of despond’ is a deep bog which Christian has to cross. Kipling knew and appreciated Bunyan’s writings – witness his poem “The Holy War”.

[line 6] Helots anew Helots were slaves in ancient Sparta. They had no rights and had to obey orders at all times.

[line 7] the bond Strictly, ‘the agreement’, but there is an echo here of the ‘Afrikaner Bond’ (Union of Afrikaners) a political party formed in South Afica in 1881 to advance the interests of the Boer peoples against British imperialism.