There was originally a prose heading quoting from an “Address of the women of Utterpara to Lady Dufferin”. Uttarpara is an industrial town in Hooghly District, West Bengal, India.

The women of India wonder how to express their gratitude to Lady Dufferin for organising her National Association for supplying Female Medical Aid to the Women of India, which trained female medical staff to attend women who were not permitted to consult a male doctor. (See below)

They ask the wind to send her their blessings and thanks.

The consort of a ruler—
more than human—

Remote, unseen, a gracious name alone ?
Nay, surely, for we know her very woman
Who, stooping down, hath made our woe her own,
Fear not, O wind, but swiftly follow after,
And take our cry, half weeping and half laughter. 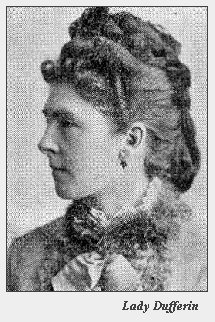 Lady Dufferin (1843-1936), the wife of the Viceroy, led a campaign to improve medical care for women in British India. Lord Dufferin had been appointed Governor-General of Canada in 1872, and there Lady Dufferin began to build up her reputation as ‘the most effective diplomatic wife of her generation’ [Dictionary of National Biography]. Lady Dufferin went with her husband to India in 1884 and started the National Association for supplying Female Medical Aid to the Women of India (‘The Countess of Dufferin Fund’) in 1885.

The association trained women doctors, midwives, and nurses, to improve the treatment of Indian women in illness and child-birth. Many ‘Lady Dufferin’ hospitals and clinics were established, and some still exist under her name.
The Times of 26 January 1889 reports progress on the Fund, referring to Lady Dufferin’s A Record of Three Years’ Work recording, amongst other things, her policy of not spending the capital on handsome buildings with no funds for their upkeep, but investing it to provide an annual imcome of Rs. 30,000.

Lady doctors registered in the United Kingdom were employed, together with female assistant surgeons and hospital assistants. The pay of the doctors was slightly higher than the men of the same grade in the Indian Medical Service as the ladies had no pension, being on five-year contracts. their passage out paid with an oufit allowance; salaries were Rs.300 per month if lodgings were provided, otherwise Rs.350 and an annual holiday of one month on full pay The doctors were permitted to attend private patients so long as that did not interfere with their official duties. At the end of the tour they received Rs.800 for passage home. The Times article gives a very full report on the Fund, its activities, finances and policy.

Ruddy was still in Calcutta when it was announced (in February 1888) that Lord Dufferin was to end early his term of office as Viceroy and would be leaving India at the end of the year. Dufferin’s lukewarm support for the nascent Indian National Congress had been enough to raise Ruddy’s hackles (the support, not the fact that it was lukewarm: Ed.) but he still greatly admired Lady Dufferin for her advocacy of Indian women’s rights and he responded to the news by writing “The Song of the Women” thanking her on behalf of Indian women “in darkness by her hand set free”. Ruddy’s reward was a letter of thanks, a volume of Lord Dufferin’s poetry and a photograph of Lady Dufferin complete with tiara, pink sash and scowl.

bazar an open market or street of shops.

lattice a window with diamond-shaped panes of glass.

the fields we may not roam in Indian women in strict purdah (seclusion) could only be seen by men of their own family, and were not usually permitted to leave their quarters. The Sahiba in Kim however, did not observe this rule strictly.

dowered a dowry is the estate (land, money, etc.) brought by a bride to her wedding and becoming, like her, the property of her husband. Here it means ‘given’.

consort in this context the spouse of a reigning monarch. As the Viceroy represents the Queen it is appropriate.

[Verse 4] As collected, beginning “By life that ebbed…”

Life that ebbed… Death from haemorrhage, that proved fatal through lack of treatment.

garnered Gathered in; usually refers to the gathering in of harvest.

O’er young buds dead children dying prematurely from lack of proper attention. ‘O’er’ is a poetic abbreviation for ‘over’.

gifts that found no favour useless sacrifices rejected by the gods.

holpen an archaic form of ‘helped’.

lo often used as ‘lo and behold’. An archaic form of ‘look’.