Published in Nash’s Magazine, June, 1914, under the title “Egypt of the Egyptians”, with three illustrations by Fortunino Matania and in Cosmopolitan Magazine, July, 1914, under the title “Egypt of the Magicians”. Here it carried the quotation from Exodus 7,22, referred to in the headnote: ‘And the magicians of Egypt did so with their enchantments.’

It was also accompanied in Cosmopolitan by four verses, without title, beginning:

Try as he will, no man breaks wholly loose
From his first love, no matter who she be.
Oh, was there ever sailor free to choose,
That didn’t settle somewhere near the sea?

These lines, which here refer to Kipling’s affection for the Muslim world—which he rediscovers in Egypt—were later enlarged to six verses and collected as “The Virginity” in The Years Between (listed in ORG as verse No. 1,004).

Kipling has shipped aross the Mediterranean from Marseilles in southern France to Port Said in Egypt at the north end of the Suez Canal. An experienced ocean traveller, he finds the ship rather old fashioned and the service poor.

Many of his fellow-passengers are stationed in India and are well used to this run. He is glad to chat to them, and finds—twenty-four years since he had worked there as a journalist—that ‘it was not a nice India that the tales hinted at’. The British are apprehensive about the future, and about the trend towards the administration of justice by native courts, which can readily be deceived, as opposed to impartial British administrators.

Kipling reaches Port Said still irritated by the service on the ship, and the apparently ungracious attitude of P & O (The Peninsular and Oriental Steam Navigation Company) towards its passengers.

The Kiplings sailed on s.s. Persia (above), a P. & O. cargo passenger ship which had been on the ‘Empire Run’ between Marseilles and Bombay since her launch in 1900. She was a smallish vessel, of just under 8000 tons, and 500 feet (150 metres) in length. On this route many of the passengers were British people working in India as soldiers or administrators, and their families, together with tourists on their way to Egypt. Unlike the tourists, many of whom were American, the Anglo-Indians would have been well-used to vessels like this.

s.s. Persia only survived a further two years. On December 30th 1915, 71 miles south east by south of Cape Martello, in Crete, she was torpedoed without warning by submarine U38 of the German navy. She sank on a few minutes with a loss of 343 lives. There is a detailed account of the incident on this web-site.

[Page 209 line 7] a serang of lascars Indian sailors or lascars, served extensively on P. & O. ships. The serang, or head man, was a key and often highly skilled figure, like Peroo in “The Bridge Builders” in .

[Page 209 line 11 ] memories in the hearer Kipling had heard no Hindustani for a long while, but understood the men’s speech from childhood, and from his time in India between the ages of seventeen and twenty-four. At the time of writing he was 47.

[Page 209 line 13] Surat a city and district of India in the northern part of Bombay, now Mumbai. Surtees from Surat have a strong sea-going tradition.

[Page 209 line 18] lascars the name for most eastern, and especially Indian, seamen, which was adopted in the British Merchant Shipping Acts as their official name. The name comes from the Persian lashkar, meaning army or camp. It was applied by the Portugese in India to an inferior class of men in the army service, and later to sailors.

[Page 209, line 19] but for the passage of a few impertinent years … Kipling was forty-seven, and a distinguished man of letters travelling with his wife. Twenty five years before, as a young reporter, he was glad to sit down on friendly terms with all sorts and conditions of people, share their food, and hear their stories. No longer.

[Page 210 line 2] below the age of caste. For small children, up to the age of eight or so, caste differences can be ignored by Hindus.

[Page 210, line 5] single-screws the White Star liner Oceanic of 1871, was the first modern luxury liner, and had a single-screw; speed 14.75 knots. In 1881 the Notting Hill, on the North Atlantic run, proved the advantages of twin-screws, with two propellors on separate shafts, in terms of power, safety, and smoothness. Even so, the single-screw was not abandoned at once, and in 1896 first-class liners were still being built with one shaft only. Broken shafts owing to higher power, and the introduction of the turbine at the beginning of the century, were the main causes of the adoption of the multiple-screw ship. The P. & O. and other leading lines were still operating single-screw ships like s.s. Persia in the second decade of the twentieth century.

Kipling and some of his fellow passengers found this vessel, and the services available on board, very old-fashioned. The ORG Editors felt that some of his strictures were unfair. This Editor takes the view that at a distancec of nearly a hundred years one needs to take his comments at their face value. He was, after all, a very experienced ocean traveller. P. & O. are still very much in business.

[Page 210, line 6] gilt-edged passenger trade the P. & O. had always charged higher fares than most of the lines plying to the Mediterranean and the East. There used to be a rhyme among its Service customers: “P. and O.- Dear and Slow”. Incidentally, it was on this run that the expression ‘Posh’, meaning grand, was coined; it comes from the side of the ship one’s cabin was on. Port Out, and Starbord Home, was best in hot weather.

[Page 210, line 18] sailing with Columbus Christopher Columbus (c. 1445¬1506), the great navigator from Genoa, who on October 12th 1492, had his first sight of what proved to be the New World—an island which he named San Salvador, which is now generally identified with Watling Island in the Bahamas. However, it was not until August 1st, 1498, on a third expedition, that he sighted the mainland of South America. 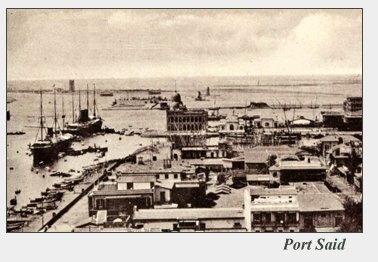 [Page 210, line 20] Port Said In Egypt at the north end of the Suez Canal. The first landfall on this voyage.

[Page 210, line 23] slummocky moving in an awkward and disorderly way.

[Page 211, line 1] Anglo-Indian At that time this referred to a British person serving or living in India, the main class of passenger catered for on this run by the P. & O. The term has later come to mean a person of mixed race.

[Page 211, line 14] because we had no mails aboard Mail was carried in faster ships.

[Page 211, line 15] exhausted …. February hysterics Often the Mediterranean can be very rough, as in St. Paul’s shipwreck on Malta; see “The Manner of Men” in Limits and Renewals.

[Page 211, line 29] Porbander on the west coast of India, north-west of Bombay on the Kathiawar peninsula.

[Page 211, line 32] Suez At the southern end of the Suez Canal and the northern extremity of the Rec Sea.

[Page 212, line 10] Pathan pronounced “patahn”, with the accent on the second syllable. A tribesman of what was then the North-West Frontier of India.

[Page 215, line 26] djinn or jinn. A powerful spirit in Arabian mythology.See “How the Camel got his Hump” and “The Butterfly that Stamped” in Just So Stories.

[Page 216, line 26] Hausa One of the major languages of West Africa, spoken by the Hausa people of northerrn Nigeria.

[Page 216, line 27] May God have mercy on your soul the words that were used by British judges at the end of the death sentence. The last execution in the United Kingdom was in 1964, and capital punishment was finally abolished in 1998.

[Page 216, line 31] Panama mentioned here because the new canal between the Atlantic and Pacific Oceans was almost ready to be opened. The ceremony was performed in August 1914.

[Page 217, line 16] a-tiptoe walking on the tips of the toes, creeping along silently and carefully. 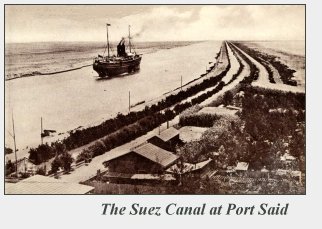 [Page 217, line 30] Sweet Water Canal this runs from the Nile at Cairo to the Suez Canal and then alongside it. It is the source of fresh water to the Canal area. The water of the Suez Canal is salt.

[Page 218, line 25] Westminster Abbey the great Abbey, across the road from the Houses of Parliament. It is a fine church with a distinguished history, and commands great respect, with a status that no shipping company could claim.

[Page 218, line 26] Borstal Reformatory These were institutions for young offenders, where a rigorous penal regime was enforced, hardly an approach congenial to paying passengers on a liner.

[Page 219, lines 12-13] a C.P.R. boat and a North German Lloyd C.P.R. was the Canadian Pacific shipping line run by the railway company of that name; North German Lloyd (Nord-deutscher Lloyd) was a German line. Both were old-established companies, and both operated transatlantic liners between Europe and North America, clearly with Kipling’s approval.