ORG (vol. 8 p. 5359) lists this poem as Verse No. 658 and records first publication in the New York World on November 8, 9, 10 and 12 1894, and the Pall Mall Gazette on November 14 and 15, linked to the story “The Undertakers”. In the Pall Mall Gazette it was printed as a heading, with the word ‘Translation’ below. It follows the story when collected in The Second Jungle Book in 1895. 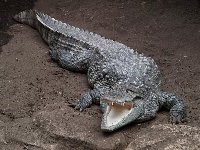 “The Undertakers” gives a gruesome account of the depredations of a man-eating crocodile in the River Ganges. This charming but tragic little poem, with its sinister hint in the last line, tells of a young girl, who, in a hurry to meet her lover, sets out to wade across the river instead of waiting for the ferry that would have taken her safely across. She is killed by a waiting crocodile. See the Notes to “The Undertakers”, p. 114, line 4.

ford a place where a river is shallow enough for people or animals to wade across. See “In Flood-time” in Soldiers Three. In the dry season in northern India the rivers are sometimes little more than a series of shallow pools between sandbars, but when the water comes down in flood from the mountains they can become raging torrents. (See “The Bridge-Builders” in The Day’s Work).

ferry-cart there are several ways of crossing a river at a ford – wading as in this case, a cart hauled by oxen, etc. Elephants are used in “In Flood-time” in Soldiers Three, and a sailing-boat in “The Head of the District” in Life’s Handicap. See also “Ford o’ Kabul River”.

Dame Disdain a woman who treats people with haughty contempt.