This poem, listed in ORG as No. 474. was sent in a letter to the American poet James Whitcomb Riley on November 20th 1890, on receiving a copy of Riley’s Rhymes of Childhood. It was published in The Cornhill Booklet in August 1900.

James Whitcomb Riley (1849-1916) was an American author who made his name as a writer of poems in the “Hoosier” dialect of Indiana. Though he never married or had children, he also wrote many children’s poems and became known as “The Children’s Poet.” Probably his best-known poem is “Little Orphant Annie”, a children’s poem in dialect. The first verse runs: 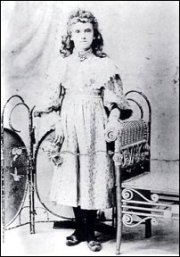 Little Orphant Annie’s come to our house to stay,
An’ wash the cups an’ saucers up, an’ brush the crumbs away,

An’ shoo the chickens off the porch, an’ dust the hearth, an’ sweep,

An’ make the fire, an’ bake the bread, an’ earn her board-an’-keep;

An’ all us other childern, when the supper things is done,
We set around the kitchen fire an’ has the mostest fun

An’ the Gobble-uns ‘at gits you
Ef you
Don’t
Watch
Out!

Riley’s book Rhymes for Children was published in 1890, and as the subheading explains, Kipling liked it so much that he wrote this poem to say thank you. He had not met Riley and did not expect to – as Verse 1 explains: ‘There is water between our lodges’ (the whole Atlantic Ocean!). But in fact they did meet later, in 1893. By then Kipling had married Caroline Balestier, an American, and was living in Vermont. According to Pinney’s note (Letters vol 2 p.110):

RK and Riley had met in New York sometime during RK’s stay there in March and April of this year (1893).

Verses 3 and 4 present a very perceptive picture of ideal happy childhood. This is perhaps surprising. Children figure as the heroes of some of Kipling’s early Indian stories, for instance “His Majesty the King” and “Wee Willie Winkie” in the book of that name, and “Tods’ Amendment” in Plain Tales from the Hills. But J I M Stewart sums up a good deal of later critical opinion when he dismisses them as ‘thickly sentimental presentations of childhood in a manner not at all to our taste today.’ (p.48). Kipling’s own eldest child Josephine was not born till December 29th 1893.

Even if Kipling was ‘thickly sentimental’ in his presentations of childhood’, in the last verse of this poem he confesses that some of Riley’s verses made him cry. Two of his letters to Riley have survived, and in both he admits the emotional effect that Riley’s poems have on him.:

TO RUDYARD KIPLING
To do some worthy deed of charity
In secret and then have it found out by
Sheer accident, held gentle Elia—
That—that was the best thing beneath the sky!
Confirmed in part, yet somewhat differing
(Grant that his gracious wraith will pardon me
If impious!)—I think a better thing
Is: being found out when one strives to be,
So, Poet and Romancer—old as young
And wise as artless—masterful as mild—
If there be sweet in any song I’ve sung,
‘Twas savored for the palate, O my child!
For thee, the lisping of the children all—
For thee the youthful voices of old years—
For thee all chords untamed or musical—
For thee the laughter, and for thee the tears.
“And thus, borne to me o’er the seas between
Thy land and mine, thy song of certain wing
Circles above me in the ”pure serene”
Of our high heaven’s vast o’er-welcoming:
While, pocketed with joy and thankfulness,
‘And fair hopes many as the stars that shine,
And bearing off love’s loyal messages,
Mine own goes homing back to thee and thine.