This letter was published in Nash’s Magazine under the title “Sudan the Respectable” and in the Cosmopolitan as “Egypt of the Magicians VII”. It is collected in Scribner’s Edition volume xxvii p. 315, the Sussex Edition Volume xxiv, p. 319. and the Burwash Edition, volume xix. One large illustration by Fortunino Matania accompanied the Nash’s publication, which was also headed by three four-line verses, later to be known as Mary’s Son (ORG Verse No. 1,009).

After the defeat of the Mahdist forces in 1898, Sudan came under British rule. This letter is based on Kipling’s reflections in Wady Halfa, across the border from Upper Egypt, as he waits for his friends the Doubledays to arrive from the south.

For a while he wanders round Wady Halfa—a mosque, odds and ends of railway track, a collection of white-washed houses on the edge of the desert—little to see. But the place is full of the ghosts of the armies, the river fleets, and the thousands of soldiers that thronged the town in the eighties and nineties, when it was Army Headquarters for the British forces.

He sees his friends’ train arrive full of joyous tourists clutching souvenirs from Omdurman, but also a few young men from the Soudan Administration, a demanding service that has been setting about the orderly reconstruction of the country after the chaotic times under the Mahdists, a process that Kipling strongly approves of. He hears of the way the army recruits old soldiers from the wars, and how the District Officers win over the tribal sheikhs from their old ways by treating them with respect and understanding. One day, as in India, there will be agitation for self-goverment … 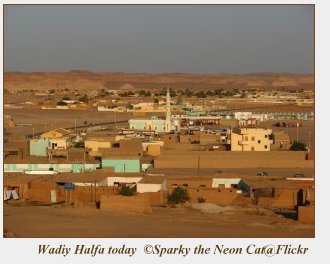 [Page 273, line 1] Halfa Wady Halfa, in Sudan, on the frontier with Upper Egypt. It is the railhead for people and goods for Khartoum which are transferred from Nile steamers to the railway.

[Page 273, lines 10-11] Hulk C. 60: H.M. Troopship “Himalaya”: HMS Himalaya was the first of three large “Imperial” troopships manned by the Royal Navy serving the Empire into the last decade of the 19th century. She was built for the P & O line in 1853 and at 3438 tons displacement was the largest steamer in the P & O fleet and, briefly, in the world. Gutted and razed as a coal hulk in Devonport, she was the shadow of her former self, like Wady Halfa in 1913.

[Page 275, line 3] polite Egyption officials There was joint Egyptian and British administration, but the British were in charge.

[Page 275, line 28] the whereabouts of the Mahdi’s head Roger Ayers writes: ‘In the bombardment of Omdurman during the battle on 1 September 1889, the tomb of the Mahdi, who died in 1885, was badly damaged.

On General Kitchener’s orders the bones of the Mahdi were removed and dropped into the Nile and the tomb blown up. Kitchener proposed to send the skull to the Royal College of Surgeons in London, which gave rise to public revulsion in the press and horrified Queen Victoria. In the end, the bones being unrecoverable, the skull alone was reburied in a new tomb in Omdurman.

Kipling’s mention of a discussion about the skull’s whereabouts appears to indicate that conspiracy theories were as alive in his day as they are now. [R.C.A.]

[Page 276, line 20] Cook boats Steamers operated for tourists up and down the Nile by the celebrated travel agent Thomas Cook.

[Page 276, line 25] ‘MacNeill’s Zareba’ A battle in the Red Sea Province north of Suakin, in March 1885, in which General John McNeill’s forces, in a formation in the desert fortified by a thorn hedge (a ‘Zareba’) fought off a large force of Mahdist tribesmen. See our note on “The Face of the Desert”.

[Page 276, line 27] tarboush properly tarboosh, or (Arabic) tabush. The brimless, flat-topped cap, shaped like an inverted flowerpot, worn by Muslim men, either as separate headgear or forming a base for the turban.

It was formerly the badge of a Turkish subject in Turkey and Egypt, where it was red in colour with a black, blue, or blue-black silk tassel. It is the same as the fez, probably named from the town in Morocco. European officers of the Egyptian army and administrative services also wore the tarboosh.

[Page 277, line 3] rest house accommodation for administrators on tour around their districts—as in India. Clearly pretty basic in Sudan.

[Page 277, lines 6-7] dervish spear the term ‘dervish’ strictly means a Muslim holy man who has taken a vow of poverty. However, the term was widely used pejoratively in the 1889s and 90s by the British to refer to the Muslim tribesmen fighting for the Mahdi, who were often armed with primitive weapons.

[Page 277, lines 19-20] a death rate a little lower than its reputation The implication is that the Soudan Administration’s reputation was even higher than the death rate Europeans might then expect in the Sudan.

[Page 277, line 29] Kirk Kilissie a town on the railway in the north of Turkey in Europe, also known as Kirklareli.

[Page 277, line 30] Adrianople West the first big station in Turkey in Europe on the railway from Bulgaria. The hero of this episode is said to be one Fox of the Scots Guards.

[Page 278, line 4] Philippines An independent Republic since July 1945, the Philippines were in Spanish possession from 1565 until 1898, when they were ‘taken’ by the United States after a brief war with Spain.

[Page 279, line 33] dimples the indented marks on the skin left after bullet wounds had healed.
The Martini-Henry was a service rifle used by the British from 1875. See “Black Jack” in Soldiers Three.

[Page 281, line 14] cut of his jib The look of him. The ‘jib’ is a triangular sail set ahead of the foremast of a sailing vessel. coupled with the number of masts, the shape of the jib was the best means of identifying the nature of a ship when seen at a distance.