This poem, listed in ORG as No 882, was included in a letter to Sir Herbert Baker, R.A., on February 9th 1905, when the form of the Rhodes Memorial was being discussed. Pinney notes (p, 1541) that Kipling forgot these lines after he had written them, and remembered them only when he saw them in Herbert Baker’s Cecil Rhodes nearly thirty years later.

This is another tribute by Kipling to his friend Cecil Rhodes. See also “The Burial” (1902).

Cecil John Rhodes was prime minister of Cape Colony from 1890 to 1896 having made a fortune from gold and diamond mining. He got on very well with Kipling and gave him a house in South Africa – “The Woolsack” – every winter for about nine years before the 1914-18 War.

The memorial is situated at Rhodes’s favorite spot on the lower slopes of Devil’s Peak. His own wooden bench is still situated below the memorial. The magnificent view facing north-east can be imagined as the start of the Cape to Cairo road. He had a dream of a British colonial Africa with a railway on British land from the Cape to Cairo. He owned vast areas of the lower slopes of Table Mountain, most of which he gave to the nation on his death. 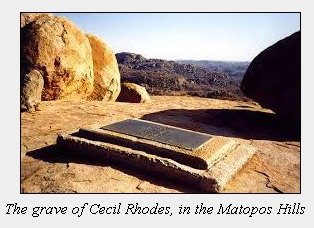 After overseeing the formation of Rhodesia during the early 1890s, he was forced to resign as Prime Minister in 1896 after the disastrous Jameson Raid, an illicit attack on Kruger’s Republic of the Transvaal, intended to encourage revolt against the Boer government. . After Rhodes’s death in 1902, at the age of 48, he was buried in the Matapos Hills, a sacred site in what is now Zimbabwe.

Rhodes endowed the scholarship at Oxford University that bears his name as an international postgraduate award for students to study there, which is widely considered to be one of the world’s most prestigious scholarships.