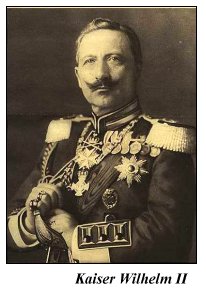 The poem tells of an attempt at the improvement of social justice by the new Emperor of Germany, Kaiser Wilhelm II, who succeeded his father in 1888 at the age of 29—only a few years older than Kipling. His plans are unsuccessful because of the determination of men to work long and tirelessly to support their womenfolk, despite attempts by the government to regulate their labours, so that the strong hold back to protect the weak from having to work too hard.

The young Emperor was very interested in the conditions of industrial workers and the laws for the handling of disputes, and came to power keen to improve them. This was one of the issues on which he clashed with the elderly Chancellor Otto von Bismarck, who had been the architect of German unity, and whose authority had been unquestioned. Wilhelm II was detemined to rule, rather than to leave key decisions tot the Chancellor, and Bismarck resigned in March 1890 before he could be dismissed.

The Times of 7 February 1890 carries a long article headed “The German Emperor and the Labour Question” in which a comprehensive programme of social reform is discussed. However, the Emperor’s views must have been known to Kipling before that as it seems doubtful if even he could have written this poem and had it published within a couple of days.

Angus Wilson (p. 149) looks at this poem in some depth, observing:

… it has an interest of another kind, for it is his first tilt at the young Kaiser Wilhelm who was to become his personal devil. But, curiously, the poem antedates his identification of Germany as the inevitable enemy of Anglo-Saxon world order … in 1890, the young Emperor, taking on the dismissed Bismarck’s paternalistic labour role, made an international appeal to working men to aid their weaker brethren …

The working men of the world, as Kipling portrays it, seem unlikely to respond to this dangerous Utopian appeal, the further weakening of self-reliance … In short, the common sense and pragmatism of working women the world over saved the day …

Germany declared her policy of naval rivalry with Britain by the new Naval Law, and in Kipling’s eyes it was sea-power that counted most. He had satirized the Kaiser in an early Ballad (“An Imperial Rescript, 1890) and continued to regard his political vagaries with contempt. At this time Rudyard mistrusted the continental states The well-intentioned moves of the Czar (of Russia) towards a general treaty of arbitration and disarmament a few months later, provoked this fierce satire

Germany’s naval programme is reported in The Times of 15 October, 1885.

David Gilmour (p. 95) attributes Kipling’s views to his elders in Lahore where:

… he had listened to the conservative views of his father and other members at the Punjab Club and he had come to share most of them, especially his elders’ identification of the internal enemies of the Empire, socialists, Irish nationalists, Gladstonian Liberals. The first two categories quickly joined the third in the list of the poet’s targets. At the end of Barrack-Room Ballads “An Imperial Resvcript” takes a tilt at socialism while “Cleared” opens his polemics against the Irish.

For Kipling’s views on socialism, see “A Walking Delegate” in The Day’s Work, and “The Mother HIve” in Actions and Reactions.. For his later view of the Kaiser see his savage war-time poem “A Death-Bed” , in which the disease he imagines the Kaiser to be suffering from is the cancer that had carried off Kaiser Frederick in 1888 and brought him to the throne. (In fact Kaiser Wilhelm lived on until June 1941.)

Rescript  Daniel Hadas notes: ‘ A rescript, in the first instance, was a response issued by a Roman emperor to a legal question sent in by a governing official. These responses had force of law, and were collected in the law codes of the Roman empire. (We get “code” from the Latin “codex”, which in this context means precisely such a collection of rescripts. The two great surviving collections are the “Codex Theodosianus” and the “Codex iuris civilis”). The term was also used in the Holy Roman Emperor. It is of course ironic here.’ [D.H.]

straw … tally of bricks an echo of Exodus, Chapter 5, where the Israelites are in slavery in Egypt engaged in making bricks out of mud and straw; Pharaoh says to the overseers :

Ye shall no more give the people straw to make brick, as heretofore; let them go and gather straw for themselves … And the tale of the bricks, which they did make heretofore, ye shall lay upon them; ye shall not diminish aught thereof.

Kipling’s point is that contrary to Pharaoh, the Kaiser was trying to regulate the toil of the workers fairly.

Baltimore
a major industrial centre and seaport in Maryland on the east coast of the United States,

Essen an important manufacturing centre in the Ruhr, in western Germany.

Clyde the river in Scotland, on which Glasgow is sited, then famous for shipbuilding.

Crewe an important railway centre in England between Birmingham and Manchester.

goose-quill large goose-feathers were formed into pens for writing with ink before the invention of steel nibs.

Sadie, Mimi… Women’s names from various countries. Sadie and Mimi were common names in the United States, Olga and Gretchen in Germany, and Mary and Jane in England.

Yankee slang for someone from the north-east of the United States; sometiems used by foreigners of Americans generally.

Jersey City seaport and industrial centre in the United States, across the harbour from New York.

W. Hohenzollern Hohenzollern was the surname of the German royal family, here used as an informal address to the Emperor, by an American who is clearly not a great believer in European-style titles.

an English delegate thundered the assumption is that this is an international Labour Conference, along the lines that the Kaiser advocated. Such a conference, opened by the Kaiser, took place in Berlin at the time of Bismarck’s fall in 1890.

Sou’-West workshops the Carriage and Wagon Works of the then London and South-Western Railway, at Nine Elms in London, south of the Thames. It was transferred to Eastleigh in Hampshire in 1891.

Wandsworth Road In London SW8, south of the Thames.

‘sociation short for ‘association’, in this instance a Friendly Society or Burial Club, a form of insurance that will pay funeral expenses.

In “In the Rukh” (Many Inventions) Muller’s accent is probably also based on Leland’s verses.

the curse of Adam … of Eve An echo of Genesis, Chapter 2. When Adam and Eve were expelled from the Garden of Eden, God spoke to them:

Unto the woman he said, I will greatly multiply thy sorrow and thy conception; in sorrow thou. shalt bring forth children; and thy desire shall be to thy husband and he shall rule over thee.

And unto Adam he said, Because thou hast harkened unto the voice of thy wife, and hast eaten of the tree, of which I commanded thee, Saying Thou shalt not eat of it: cursed is the ground for thy sake; in sorrow shalt thou eat of it all the days of thy life … in the sweat of thy face shall thou eat bread till thou return into the ground; for out of it wast thou taken: for dust thou art, and unto dust thou return.

razored the Grindstone  The story of the razor and the grindstone is that of Attus Navius.[D.H.]

the cat was belled To “bell the cat” is an English colloquialism that suggests an attempt to perform an impossible task. It comes from Aesop’s Fable “The Mice in Council”, where a group of mice declare that the only way to avoid the dangerous cat is to tie a bell around its neck to give warning of its approach. One mouse then asks who is going to do it. The moral is that it is easy to suggest a solution to a difficult task so long as someone else can implement it.

Figs from Thistles Another impossibility, this time from Matthew 7,16: ‘ Ye shall know them by their fruits. Do men gather grapes of thorns, or figs of thistles ?.’

Twisted Sand a rope of sand is a proverbially weak link, a union that is easily broken [Brewer’s Dictionary of Phrase and Fable].