Haroun Alrashid (the spelling in English varies, often spelt as Haroun al Raschid) was the fifth Abbasid Caliph who had a fabulous court at Baghdad – he ascended the throne in 786 and died in 809. 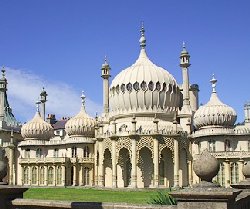 Bagdad Brighton, from the minarets and domes of the Royal Pavilion, reminiscent of the legendary city of the Caliph of Baghdad, capital of today’s Iraq. The Kiplings were living at ‘The Elms’ in Rottingdean, just outside Brighton, moving to ‘Bateman’s’ in September 1902, the year after publication of this story

brazen engines the engines (see above) were then painted a golden ochre, perhaps best described as gamboge: the engineer who designed this livery, William Stroudley, described it as “Improved Engine Green”, and in certain lights a green tone could indeed be seen. Today, the colour can still be seen on certain ex-L.B.S.C.R. engines running on the Bluebell Line in East Sussex.

litters in this context curtained couches carried by men or horses but here meaning railway-carriages.

lover to his beloved Brighton was notorious as the place to go for an illicit assignation with a lover. See two lines below, where the people of ‘Bagdad’ are described as “amorous and adventurous”.

some twelve merchants Company Law has changed so much that this Editor is unable to speak with certainty, but it seems possible that the figure was chosen deliberately, because there had to be a minimum number of members for a public limited company: delving into the recesses of memory, the figure was 15 – but that was in the 1970s.

Except his neighbour contend against him in the market-place ‘The Brighton’ railway company enjoyed a virtual monopoly in Sussex and east Surrey, and – it was contended – displayed the cavalier attitude which monopolies often display towards their customers or clients.

Mesrour a character in another story “The Loves of Jubeir Umeir and the Lady Budour”. 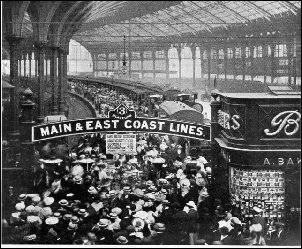 linen drawers etc he intends to bathe in the sea

chaplet in this context, a wreath of flowers worn on the head as Bacchus, the god of wine is often depicted.

caravanserai known as a serai in India – a large square surrounded by buildings where camel, horses, goods and men are accommodated – here meaning a railway-station. See Kim Chapter 1.

a servant of the Afrit a railway-porter – see “Uncovenanted Mercies,” Limits and Renewals, page 390 line 6

‘With thy permission!’ “By y’r leave” was the railway-porter’s traditional cry, asking people to move out of the way so that he could push through with his luggage barrow, the “small wheeled cart”, which today has disappeared, along with the porter.

the first is behind the third etc first, second and third class compartments. In other words “the first-class carriages are nearest the ticket-barrier, followed by the third-class, then the second-class”.

Lawaz Lewes, county town of East Sussex and an important railway-junction which is still a maze of platforms and bridges in 2009

towers of Harundill Arundel Castle: on the line from Ford Junction to Horsham

Sha’ham Shoreham: on the Brighton to Portsmouth line

nor may he give away the bond even to his maternal uncle tickets were marked – still are – “not transferable”.

I wash my hands a symbolic gesture of unwillingness to take responsibility for some matter – see Matthew 27, 24. Look at the back of your rail ticket the next time you travel to see the current form which says “Travel is subject to the National Rail Conditions of Carriage, etc. . . .”

wet-nurse a woman who suckles a child for another

‘Behold his hair!’ a rudeness – perhaps a variation on “Get your ‘air cut! or “Keep your ‘air on !” Probably the Caliph was bearded, and this may be Kipling’s version of the cry of “Beaver”, which was a sort of ‘I-Spy’ game played between two companions, to see who could sight the most bearded men, though the Oxford English Dictionary’s earliest reference is not until 1910.

eight alley-ways eight platforms – see Lawaz above: this was an accurate description of Lewes station.

the ball of his goal…etc. a reference to the game of polo – see “The Maltese Cat” (The Day’s Work).

‘O true believers, who can do more than set forth his holy intentions? timetables have always carried a disclaimer in some form or another – e.g., “Connections are not guaranteed”. Today, the language may be almost as flowery as Kipling’s mock Persian, but the meaning is much the same.

‘Such an one, the son of such an one naming and shaming travellers who had tampered with their tickets

ferash the bastinado, a painful beating on the soles of the feet. See “Little Foxes”, Actions and Reactions, page 243 line 2.

‘Ailsham Hailsham, on the Polegate to Groombridge line

Zobeide a lady of Baghdad in “Three Calendars” who married Haroun-al-Raschid in The Arabian Nights.

Abu Bakr It is pure speculation, but it may be suggested that this is an indirect reference to the former chairman of the Brighton company. Until very recently the chairman had been Samuel Laing: outside London Bridge station there used to be a prominent advertisement on their factory, for the bakers and biscuit makers Macfarlane, Lang. Kipling may have used the expression Abu Bakr to indicate a baker (of biscuits) – the name Lang/Laing – being well-known on ‘The Brighton’, although Samuel Laing, the chairman, had no connection with Macfarlane Lang, the bakers, other then the fact that the names are homonyms.

Upon a day appointed: here follows Kipling’s most important suggestion for “Railway Reform in Great Britain”, and particularly on ‘The Brighton’: namely to so badger the Directors, at home (but in an entirely lawful way), and to ridicule them and their railway, so that they take their responsibilities as Directors seriously. Instead of merely holding a few meetings (‘It is the custom of those who are in partnership with the Afrit to meet but four times a year’), each of the Directors ‘cast off his garments and bought a leathern apron and a porter’s knot and went down to the caravanserai to oversee and to expedite the brazen engines’.

a message, written upon pale paper a telegram form.

Krahidin Croydon on the main line to London

Fatima a character in “Aladdin and the Wonderful Lamp” and a popular name for women.

Cypress-Branch….etc. it is implied that the lady is a courtesan

pelicans water birds (with a pouch below the beak) belonging to the family Pelecanidae.

mulberry-tree The Morus or Mulberry is a genus of 10–16 species of deciduous fruit trees native to warm temperate and subtropical regions of Asia, Africa, Europe, and the Americas,

Roc a fabulous giant bird, supposed to be able to carry off an elephant.

porter’s knot a band of cloth that goes round the forehead and down the back to support a load (Clifford W. Ashley The Ashley Book of Knots, Faber, 1944): not used on British railway stations, but the equivalent of the leather straps used by the French porters at Calais or Boulogne, whom Kipling came to know well, slung over their shoulders to carry passengers’ luggage.

butt an object of derision

leases documents giving an interest in land for terms of years; they do not necessarily terminate on death (except, of course, life tenancies).

heriots fines due to the lord of the manor on the death of a tenant – usually his best animal or article of furniture, etc.

Allah-al-Bari The 12th of the 99 Names of God, The Creator who has the Power to turn the entities, The Artificer, the Creator.