This story was first published in The Delineator in August 1910, and collected in Rewards and Fairies later in the same year.

This story follows on from “Brother Square-Toes”. Pharaoh Lee, back in Philadelphia, meets a lame, bedraggled French emigré, begging in the street. He has been set on by a crowd and is in a pitiful state. Pharaoh befriends him, and takes him back to Toby’s room, where – over a couple of bottles of Madeira – he recovers his poise, and shows himself to be charming and adroit, a skilled diplomat.

Pharaoh follows the emigré’s fortunes, and finds that he is a former priest, and a distinguished man, Count Talleyrand, the ex-Ambassador from the French King to Britain. Talleyrand hears about the exchanges between Washington and the Seneca Chiefs (see “Brother Square-Toes”) and is desperate to find out what the President had said about war with England to Ambassador Genêt, so that he can take this back to Paris as a passport to influence with the revolutionary goverment. But Pharaoh refuses, despite the offer of a bribe of five hundred dollars. Pharaoh goes off to the Seneca reservation for a while, and when he gets back he finds that Talleyrand has sailed for France, and – nonetheless – left him five hundred dollars, a small fortune.

Pharaoh doubles his money by horse-trading, and buys a good cargo of tobacco, and a fast sailing ship to carry it to Europe. But he runs into a French warship, and – after an exchange of shots – his ship and cargo are taken. He follows his tobacco to Paris, and then – in the street – encounters Talleyrand. The Abbé is once more a man of power and influence, and is on his way to see Napoleon – soon to become Emperor of France. Out of gratitude, and against Napoleon’s wishes, Talleyrand gives Pharaoh back his ship, and twice the cost of the cargo.

Pharaoh’s encounter with Napoleon and Talleyrand which climaxes the story takes place after the coup of November 9-10 1799 in which they, in collaboration with the ex-churchman and political theorist, the Abbe Siéyes, overthrew the five-man Directory which had ruled France since 1795. It was replaced by three Consuls: Napoleon, Siéyes, and Roger Ducos, the first of whom rapidly took supreme power.

[Page 185, line 5] casting the Lot cf. Acts 1, 26: ‘And they gave forth their lots; and the lot fell upon Matthias; and he was numbered with the eleven apostles.

[Page 185, line 9] the French emigres which Philadelphia was full of Once the French King had gone to the guillotine in 1793, it was often enough to have been an aristocrat to be sentenced to death. In consequence a great many high-born French fled to England and America, often penniless.

[Page 186, line 17] scrattel ORG glosses ‘scrattle’ as Sussex dialect for ‘a feeble skinny person’. It may, though, have been coined by Kipling.

[Page 186, line 20] Peringuey Charles-Maurice de Talleyrand-Perigord (1754-1838). Debarred from a military career by lameness, he entered the Church and became bishop of Autun. A strenuous defender of Church privileges before 1789, he emerged as one of the most radical deputies in the early stages of the Revolution and was excommunicated after introducing the Civil Constitution of the Clergy in 1790. 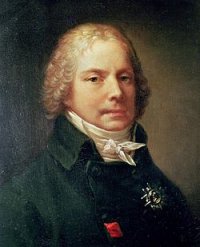 Expelled from England, where he had been on a diplomatic mission, in January 1794, he spent two years in America, returning to France in September 1796. Thereafter he remained near the centre of French foreign policy for much of the next forty years. Treacherous, greedy, and a master diplomat, he signed two documents a few hours before his death in which he declared himself reconciled with the Church and received extreme unction with his hands turned down, as the rite prescribes for a bishop. 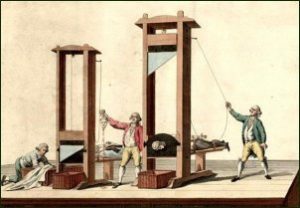 [Page 189, line 13] guillotine The notorious machine used during the period of frequent executions known as the ‘Terror’.

[Page 190, line 12 ] Father Tout-a-tous a gibing adaptation of the Pauline selfdescription in 1 Cor. 9, 22: ‘I am made all things to all men’ . (In French: je me suis fait tout à tous). For Kipling’s interest in this aspect of St Paul see “The Manner of Men” and its accompanying poem in Limits and Renewals.

[Page 190 , line 11] dice usually loaded Loaded dice were tampered with by cheats so that the throw of the dice could be predicted.

[Page 190 , line 15] Cunégonde the love of the eponymous hero in Voltaire’s satire Candide.

[Page 193, line 8 ] Huron the Hurons, an Iroquoian-speaking tribe were in fact, bitter enemies of the Iroquois League.

[Page 195, line 10] ci-devant literally ‘former’, a term applied to aristocrats who had lost their titles in the Revolution.

[Page 202, line 7] condemn to adjudge forfeited as a prize of war or as smuggled goods.

[Page 203, line 2] pickings and stealings cf. the Catechism in The Book of Common Prayer, which lists among the duties towards one’s neighbour:

‘To keep my hands from picking and stealing’.

[Page 204, line 12] Brumaire As another sign that they were breaking with the past, the French revolutionaries revolutionised the calendar and renamed the months. ‘Brumaire’ (‘the misty month’) was October 22nd to November 22nd.

[Page 204, line 21] Aboukir Bay scene of the Battle of the Nile (1798) where a French fleet was destroyed by the English under Nelson.

[Page 206, line 21] speech to the Five Hundred. the constitution of 1795 had set up two legislative councils the Ancients and the Five Hundred. In the course of the coup Napoleon addressed both; in the case of the latter with the outcome indicated in the text.